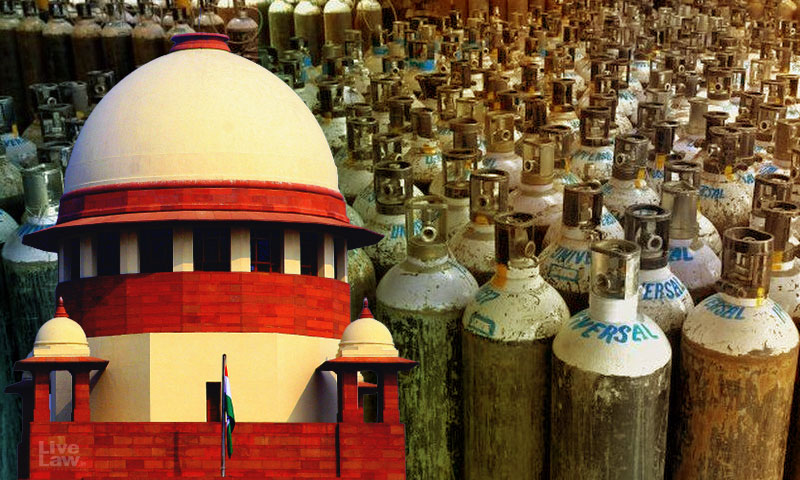 The Supreme Court has constituted a 12 member National Task Force to formulate a methodology for scientific allocation of liquid medical oxygen to all the States and Union Territories in order to deal with the dearth of oxygen supply amid the second Covid wave.A division bench comprising of Justice DY Chandrachud and MR Shah constituted the Task Force which will be at liberty to draw upon...

The Supreme Court has constituted a 12 member National Task Force to formulate a methodology for scientific allocation of liquid medical oxygen to all the States and Union Territories in order to deal with the dearth of oxygen supply amid the second Covid wave.

A division bench comprising of Justice DY Chandrachud and MR Shah constituted the Task Force which will be at liberty to draw upon the human resources of the Union Government for consultation and information and may also constitute one or more sub-groups on specialised areas or regions for assisting it, before finalising its recommendations.

The Court constituted the task force after noting deficiencies in the Centre's formula for oxygen allocation, which is based on hospital-beds in a state. The Court had earlier flagged that this formula required a re-look as it did not take into account individuals who may not have secured hospital admission, but are in need of oxygen support.

During the course of hearing, it was suggested by the Court that an "expert body" involving national experts with experience in health Institutions can be set up as a National Task Force which will be responsible for providing public health response based upon a scientific approach on the issues concerning pandemic situation.

To this, the Solicitor General informed the Court that the Centre has "responded favourably to the suggestion".

"It is necessary that an effective and transparent mechanism is set up within the Union Government for the purpose of allocating medical oxygen to all States and UTs for being used during the COVID-19 pandemic. The Union Government has agreed to set up a National Task Force to streamline the process.This Task Force would be tasked inter alia with formulating a methodology for the scientific allocation of oxygen to the States and UTs. The Union Government has made its suggestions on the possible names for inclusion in the composition of the Task Force, while leaving its final composition to the Court", the Court observed.

This Task Force would be tasked inter alia with formulating a methodology for the scientific allocation of oxygen to the States and UTs, the Court said.

The Task Force has been constituted on the suggestions of the Centre on the possible names to be included in its composition.

"The rationale for constituting a Task Force at a national level is to facilitate a public health response to the pandemic based on scientific and specialised domain knowledge. We expect that the leading experts in the country shall associate with the work of the Task Force both as members and resource persons. This will facilitate a meeting of minds and the formulation of scientific strategies to deal with an unprecedented human crisis." the order reads.

While constituting the said National Task Force, the Court has directed the Centre to continue the present practice of making allocations of oxygen until the Task Force has submitted its recommendations in regard to proposed modalities.

"The Union Government shall on receipt of the recommendations of the Task Force take an appropriate decision in regard to the allocation of oxygen and on all other recommendations." The order reads.

Furthermore, the Court has requested the Task Force to commence it's work immediately for "taking up the pressing issue of determining the modalities for oxygen expeditiously within a week".

Highlights of the National Task Force

- The establishment of this Task Force will enable the decision makers to have inputs which go beyond finding ad-hoc solutions to the present problems.

- This will ensure that projected future requirements can be scientifically mapped in the present and may be modulated in the light of experiences gained.

- The establishment of the Task Force will provide the Union Government with inputs and strategies for meeting the challenges of the pandemic on a transparent and professional basis, in the present and in future.

-Assess and make recommendations for the entire country based on the need for, availability and distribution of medical oxygen.

- Formulate and devise the methodology for the allocation of medical oxygen to the States and UTs on a scientific, rational and equitable basis.

-Make recommendations on augmenting the available supplies of oxygen based on present and projected demands likely during the pandemic.

- Make recommendations for the periodical review and revision of allocations based on the stage and impact of the pandemic.

- Facilitate audits by sub-groups within each State and UT.

-Review and suggest measures necessary for ensuring the availability of essential drugs and medicines.

- Plan and adopt remedial measures for ensuring preparedness to meet present and future emergencies which may arise during the pandemic.

- Facilitate the use of technology to ensure that the available manpower is optimised for implementing innovative solutions particularly in order to provide an outreach of expert medical care to rural areas.

- Suggest measures to augment the availability of trained doctors, nurses and para-medical staff including by the creation of suitable incentives

-Promote evidence based research to enhance effective responses to the pandemic.

- Facilitate the sharing of best practices across the nation to promote knowledge about the management of the pandemic and treatment of cases.

- Make recommendations in regard to other issues of pressing national concern to find effective responses to the pandemic.

Also in the order :

No Material Produced By Centre To Show Increasing Delhi's Oxygen Allocation By 210 MT Will Reduce Other States' Quota :Supreme Court

Case Title : Union of India vs Rakesh Malhotra and another.