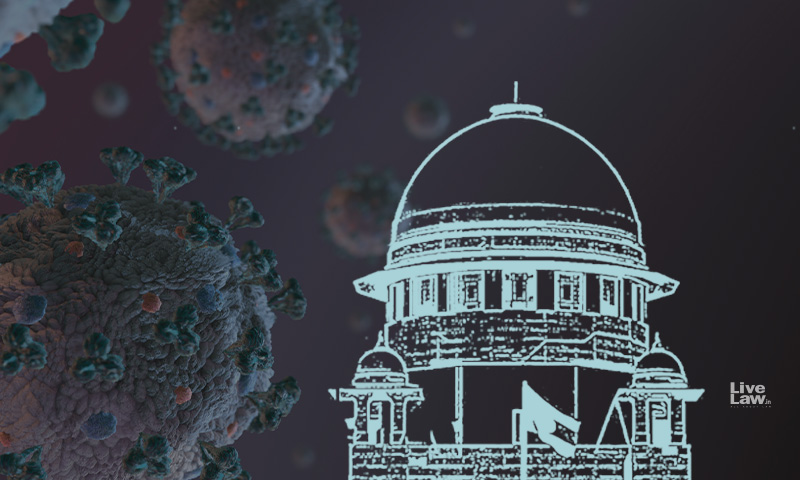 On Wednesday, the Supreme Court directed the States not to reject applications/claims of the kin/family members of persons who have succumbed to COVID-19 on technical grounds. The Apex Court further noted that wherever applications are rejected the States are duty bound to communicate the reason for the same to the concerned claimant and provide them opportunity for rectifying...

On Wednesday, the Supreme Court directed the States not to reject applications/claims of the kin/family members of persons who have succumbed to COVID-19 on technical grounds. The Apex Court further noted that wherever applications are rejected the States are duty bound to communicate the reason for the same to the concerned claimant and provide them opportunity for rectifying the application.

On perusal of the chart placed on record by the Union of India, a Bench comprising Justices M.R.Shah and Sanjiv Khanna observed that several States have rejected a number of claims received. For eg. Gujarat had rejected 4234 claims; Maharashtra 49113; Tamil Nadu 10138, Telangana 1489. The Bench directed the States to furnish the particulars of rejection to the concerned claimant as well as the Grievance Redressal Committee constituted by the Apex Court within a period of one week.

Also during the course of the hearing, it came to the notice of the Bench that some States have rejected claims. The Bench pulled up the States of Bihar and Andhra Pradesh for non-compliance of its previous orders. While passing directions, it had categorically cautioned the two States from rejecting claims on technical grounds.

The bench was considering the case Gaurav Kumar Bansal versus Union of India, in which it is monitoring the disbursal of ex-gratia for COVID-19 deaths. Earlier, the bench had directed the States to give wide publicity to the application process in print, electronic and social media so that the families of victims are made aware of the compensation scheme.

The Supreme Court has approved the compensation amount of Rs 50,000 for COVID deaths as recommended by the National Disaster Management Authority.

Upon hearing that Chandigarh administration had received 524 applications out of which 379 would be disbursed within a week, the Bench insisted the Union Territory to expedite the process and make the payment by tomorrow.

The Bench was apprised that in Haryana the officers were physically visiting the eligible claimants as per the death record maintained by the State. So far 7350 applications have been received and payment has already been made to 6385 applicants. In some cases the payment has been reverted by the Bank, which the State is attempting to resolve. Some claimants have expressed their disinterest and some claimants could not be traced physically.

The Bench enquired, "What are the reasons for rejection?"

Unaware of the same, Ms. Luvkumar assured the Court that she would get the requisite information shortly.

Justice Khanna asked Ms. Luvkumar about the mechanism followed by the State once the application is rejected.

"When you reject, you put it on the website, the reasons for rejection?"

Ms. Luvkumar responded saying once the application was rejected the concerned applicant had the right to approach the Appellate Committee.

Rephrasing his query, Justice Khanna asked "Do you inform that person why their application has been rejected?"

Ms. Luvkumar assured the Bench that during the course of the day she would place on record a specimen of the rejection letter/document sent to the applicant.

The Bench lauded the State of Gujarat for receiving approximately 91,000 applications when the death recorded in the State was about 10,000. It opined that the same was possible because of the wide publicity given to the scheme by the State.

Advocate, Mr. Nishe Rajan Shonker appearing on behalf of the State of Kerala submitted that they had received 27,274 applications as on 05.01.2022 and have disbursed payment for 23,652 applicants.

Observing the number of recorded deaths surpasses the number of applications, the Bench directed the State to take immediate action for the 49300 claimants whose records were already available with the State.

Advocate, Mr. Nachiketa Joshi appearing on behalf of the State of Madhya Pradesh apprised the Bench that total deaths recorded are 10,543; claims received are 12,482, against which 10,463 applications have been approved; and disbursal has been made to 10,442 claimants.

Advocate, Mr. Rahul Chitnis appearing for the State of Maharashtra submitted that the State had paid 1,00,271 applicants and approved the claim for about 1,02,000 applicants. Only 2000 more applicants are to be paid.

The Bench reminded Mr. Chitnis that the State had received 2,13,000 applications and only 50% has been paid off.

The Bench was informed that -

Considering that the maximum number of deaths due to COVID-19 have been recorded in the State of Maharashtra, the Bench suggested that it has to be more proactive in disbursing the compensation.

Noting 49000 applications have been rejected, the Bench enquired, "What are grounds for rejection?"

The Bench clarified that the State is to only consider the death certificate, the RT PCR certificate and the Aadhaar card.

The Bench further enquired, "Have you informed them?"

Mr. Chitnis informed the Bench that Collectors have gone to the applicant's homes to inform them.

The Bench, inter alia, directed the State to provide information pertaining to the rejection of the applications.

"Shri Rahul Chitnis, Ld. Counsel for the State has stated at the bar that total 1,41,887 registered deaths against which State has received 2,17,151 claims. It is reported that out of the applications received 1,02,772 have been approved and the payment shall be made. It is reported that 49,113 claims have been rejected on various grounds. It is stated at the Bar that with respect to the balance applications, the same are under process and actual payment shall be made in a week from today. On the next date of hearing Ld. Counsel to place on record in a tabular chart the reasons for rejection of the claims and whether all claimants whose forms have been rejected have been informed and given opportunity to take corrective measures."

Advocate, Ms. Ranjeeta Rohatgi appearing for the State of Punjab informed the Bench that a total of 8786 claims have been received and payments for 6667 claimants have been made.

The Bench asked, "What steps have you taken when 16517 deaths have been registered in your State?"

Due to connectivity issues the query remained unattended.

The Bench noted that in the State of Himachal Pradesh the death registered are 3821 and the applications received are 670. Again in Jharkhand registered death are 5140, but only 122 applications had been received as on 03.12.2021.

Ms. Bhati informed the Bench , "These are states that your lordships did not issue notice to".

She was instructed to get in touch with the Chief Secretaries and see to it that the compensation is disbursed to the eligible claimants.

On the issue of rejection of application, the Bench directed the States -

"From the chart produced by Ms. Bhati, Ld. ASG it appears that in many states number of claims are rejected. For eg. in Gujarat 4234 claims are rejected; Maharashtra 49113 claims rejected; Tamil Nadu 10138 claims rejected; Telangana 1489 claims rejected. The reasons for rejection maybe due to incomplete form and/or incomplete particular etc. We direct all states that wherever the claims are rejected the reasons for rejection must be communicated to the concerned claimants and they be given an opportunity to rectify the claims/applications. We also observe that no claims may be rejected on technical ground and if there is any lacunae in the claim an opportunity should be given to the concerned claimant to rectify the mistake… Such particulars of rejection shall be sent to the concerned applicant and the Grievance Redressal Committee constituted pursuant to order of this court within a period of one weeks from today."

On the request of the applicants, the Bench also directed the state authorities to reach out to the children who have lost their parents to COVID-19 and whose particulars are available on the Bal Swaraj Portal to assist them with their claims.