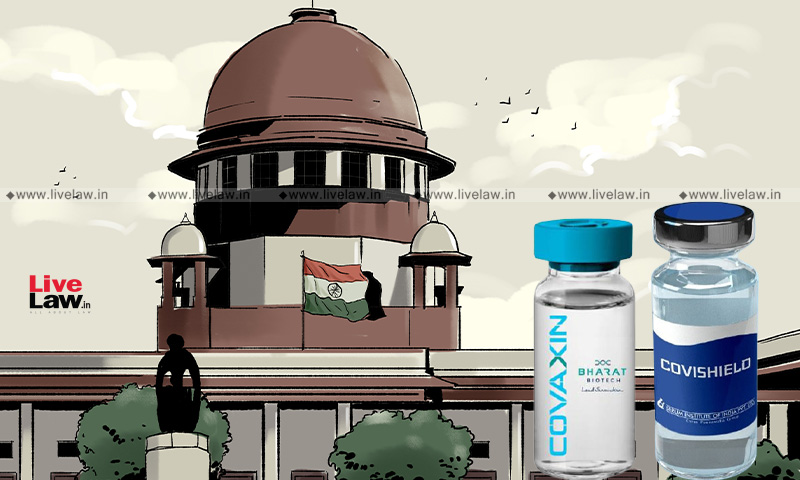 The Supreme Court on Friday required to be served on the office of the SG the plea seeking directions to Centre to follow up, record and advertise instances of death occurring within 30 days of immunisation, filed in the face of "growing deaths and adverse effects after COVID vaccinations"Senior Advocate Colin Gonsalves, for the petitioner, told the bench headed by Justice D. Y....

The Supreme Court on Friday required to be served on the office of the SG the plea seeking directions to Centre to follow up, record and advertise instances of death occurring within 30 days of immunisation, filed in the face of "growing deaths and adverse effects after COVID vaccinations"

Senior Advocate Colin Gonsalves, for the petitioner, told the bench headed by Justice D. Y. Chandrachud, "There were 900 reported deaths across the country, linked to the vaccine, at the time this petition was filed. Healthy people going for vaccination, collapsing and dying."
Justice Chandrachud noted, "It may not be attributable to the vaccine, the vaccine not be the actual cause. What is the correlation? The vaccination does not control deaths for reasons aliunde."
"Maybe. But we must have a monitoring system which will record this. Also, these deaths have to be investigated- why did he die? was there a clot in the heart? aclot in the brain, he has to be taken for checking", submitted Mr. Gonsalves.
He continued to indicate the 2015 central government 'Adverse Effect After Immunisation' Guidelines- the 'Surveillance and Response' Operational Guidelines, which, he submitted, contained a mandate to the 10s of 1000s of healthworkers, such as Asha and Aanganwaadi workers to check on and follow-up with the village etc where vaccination has been applied for a specific period after which a clearance was granted. He indicated that there was a special protocol stipulated for a apost-mortem where there was a death on account of a clot etc post the immunisation.
He submitted that these guidelines have now been revised in 2020 which only provides for a "passive surveillance", relying only on the complaint of the person concerned or the family affected.
"That is why there is this unbelievable number of official deaths in the India, of only 2 or 3!", he pressed
At this, Justice Chandrachud remarked, "You cannot say 'unbelievable'. We have to look at the countervailing benefits of vaccination! We cannot send a message that there is some problem with the vaccination. The WHO has spoken in favour of vaccines, countries across the world are doing it! We cannot just cast doubt on it."
"Also, the revised guidelines also provide another channel for tracking 'serious and minor AEFI'. They require 'monthly progress reports' through the 'peripheral health staff' which would be including Asha workers", continued the judge.
"The WHO is telling all countries that there should be of active surveillance- data collection system through a designated staff visiting the area, follow-up for 1 year, to monitor any 'vaccine-associated enhanced disease'...but it is not being done in the country. The approach here is of passive surveillance- to wait for the person or family to complain! There are 9000 deaths in the country which should be investigated! Doctors throughout the country have asked the government for data!"
"We cannot say we have not formulated guidelines for AEFI in India; we do have a system. There are always bound to be dissenters, but we can't fashion our policy as per them. We have to see. the good of the nation as a whole! The world was in throes of an unprecedented pandemic the likes of which we have not seen in our life! It is of the highest national importance that we vaccinate! We cannot cast a doubt on it! In hindsight, there will always be other studies, 5 or 10 years down the lane. But we cannot afford the price of laxity, of not vaccinating! We have to keep the people safe and reduce fatality!", reflected Justice Chandrachud.
"There will always be other points of view. But when you have guidelines, why should the court interfere at this crucial stage of vaccination? Every country in the world, including those with substantial populations, have multiple vaccines! Look at the developed world- the US!", observed the judge.
"I hear it being said in the courts that we cannot allow vaccine hesitancy. But all other countries are doing active surveillance! India alone has jettisoned it!", urged Mr. Gonsalves
After conferring with each other, the bench said that " we have a few things in our minds". The bench then allowed Mr. Gonsalves to serve a copy of the plea on the office of the SG, listing the matter after 2 weeks.
Case Title :Ajay Kumar Gupta and others versus Union of India |W.P.(C) No. 588/2021
Click Here To Read/Download Order