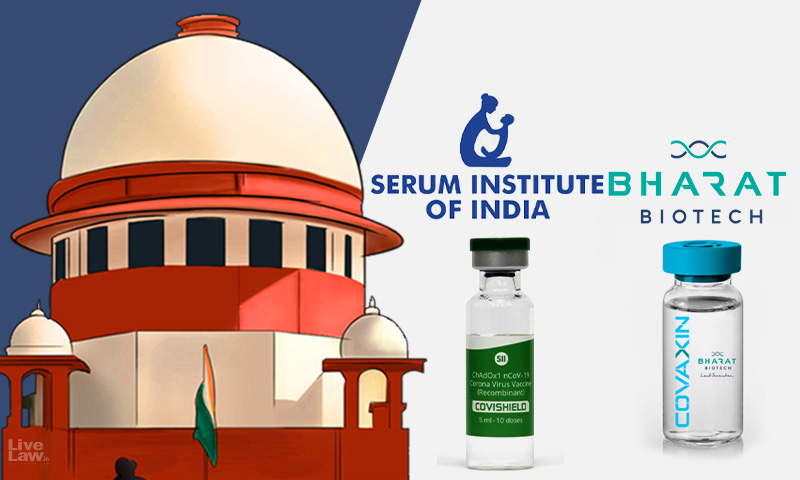 The Supreme Court has asked the Union Government to clarify how the sum of Rs 35,000 crores earmarked in the Union Budget for procuring vaccines have been spent so far.Further, the Court has asked why these funds cannot be used for giving free vaccination for those in the age group 18 to 44 years."The Union Budget for Financial Year 2021-2022 had earmarked Rs35000 crores for...

The Supreme Court has asked the Union Government to clarify how the sum of Rs 35,000 crores earmarked in the Union Budget for procuring vaccines have been spent so far.

Further, the Court has asked why these funds cannot be used for giving free vaccination for those in the age group 18 to 44 years.

"The Union Budget for Financial Year 2021-2022 had earmarked Rs35000 crores for procuring vaccines. In light of the Liberalized Vaccination Policy, the Central Government is directed to clarify how these funds have been spent so far and why they cannot be utilized for vaccinating persons aged 18-44 years", the Court observed.

This significant observation was made by a bench comprising Justices DY Chandrachud, L Nageswara Rao and S Ravindra Bhat in the suo moto case In Re Essential Distribution of Essential Supplies and Services During Pandemic.

The Court questioned the justification given by the Centre in its affidavit that the pricing policy has been framed to enable competitive pricing to incentivize more private manufacturers. When there are only two manufacturers to negotiate with pre-fixed prices, the Court wondered how this justification can be tenable.

"The current Liberalized Vaccination Policy enables State/UTGovernments and private hospitals to procure 50% of the monthly CDL approved doses in the country at a pre-fixed price. The justification for this Policy has been adduced in a bid to spur competition which would attract more private manufacturers that could eventually drive down prices. Prima facie, the only room for negotiation with the two vaccine manufacturers was on price and quantity, both of which have been pre-fixed by the Central Government. This casts serious doubts on UoI‟s justification for enabling higher prices as a competitive measure. Furthermore, the Central Government justifying its lower prices on account of its ability to place large purchase orders for vaccines,raises the issue as to why this rationale is not being employed for acquiring 100% of the monthly CDL doses", the Court observed.

The Court has also made another significant observation that the policy of the Centre to not provide free vaccination for those in the age-bracket of 18-44 years is "prima facie arbitrary and irrational".

"If the Central Government‟s unique monopolistic buyer position is the only reason for it receiving vaccines at a much lower rate from manufacturers, it is important for us to examine the rationality of the existing Liberalized Vaccination Policy against Article 14 of the Constitution, since it could place severe burdens,particularly on States/UTs suffering from financial distress", the Court further observed.

"...it is reiterated that the Union of India should consider utilizing its position as the monopolistic buyer in the market and pass down the benefit to all persons. Even if the States/UTs were to fund the higher-priced vaccines, a burden they were not discharging before the Liberalized Vaccination Policy was introduced and potentially may not have planned in advance for, these funds are expended at the behest of the public exchequer. The Centre and States/UTs, both operate in the service of the Indian population, and raise and disburse funds in their name. The additional funds expended on procuring vaccines against a deadly pandemic are necessary expenditure for any State/UTGovernment which has battled the public health emergency for over 15 months now".

Also Read other reports about the order :

'Digital Divide Will Have Serious Implications On Right To Equality & Health': Supreme Court On CoWIN Portal

Title : In Re Distribution of Essential Supplies and Services During Pandemic (Suo Moto Writ Petition(civil) No.3/2021)