'Digital Divide Will Have Serious Implications On Right To Equality & Health': Supreme Court On CoWIN Portal 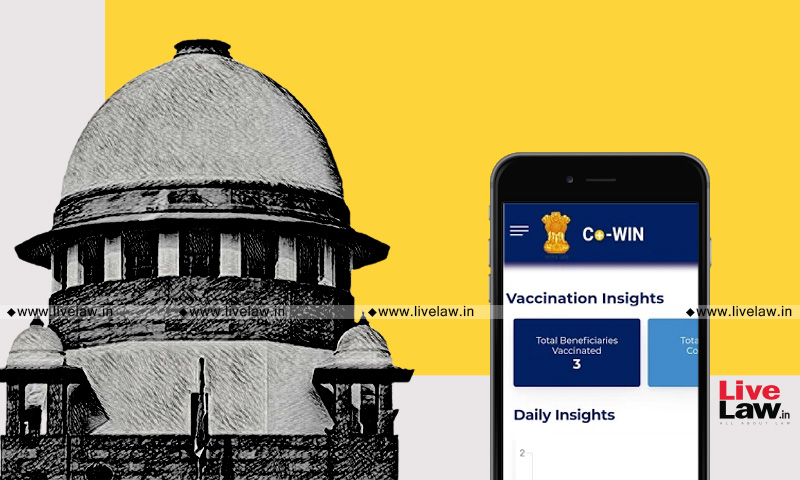 The Supreme Court has flagged the digital divide afflicting the accessibility to the CoWIN portal in its latest order in the Suo Moto COVID case [In Re Essential Distribution of Essential Supplies and Services During Pandemic], stating that it could have serious implications on right to equality and right to health."A vaccination policy exclusively relying on a digital portal for...

The Supreme Court has flagged the digital divide afflicting the accessibility to the CoWIN portal in its latest order in the Suo Moto COVID case [In Re Essential Distribution of Essential Supplies and Services During Pandemic], stating that it could have serious implications on right to equality and right to health.

"A vaccination policy exclusively relying on a digital portal for vaccinating a significant population of this country between the ages of 18-44 years would be unable to meet its target of universal immunization owing to such a digital divide. It is the marginalized sections of the society who would bear the brunt of this accessibility barrier", said the Bench comprising Justices DY Chandrachud, L. Nageswara Rao and S. Ravindra Bhat in its 31st May order.

The Order also states that it has been brought to the notice of the Court that the CoWIN platform is not accessible to persons with visual disabilities, and that the accessibility barriers should be addressed.

The Order refers to survey on 'Household Social Consumption: Education' conducted by the National Statistics Office (July 2017-June 2018) to highlight that around 4% of rural households and 23% of urban households possess a computer. Further, in the age group of 15-29 years, around 24% in rural households and 56% in urban areas are able to operate a computer. It additionally showcases that 24% of the households in the country had internet access during the survey year.

The Bench has also cited the report titled "Wireless Data Services in India" by Telecom Regulatory Authority of India to underline that out of a population of 1.3 billion, only 578 million people in India (less than 50%) have a subscription to wireless data services. Also, few Indian States like Bihar, Uttar Pradesh and Assam have a tele density of less than 75%.

In response to the Solicitor-General's submission that those who do not have access to digital resources can take help from family, friends, NGOs and Common Service Centres, the Order refers to the Annual Report of CSC for 2019-2020, published by Ministry of Electronics and Information Technology to state that approximately 13,000 Gram Panchayats in India do not have a CSC.

Taking the above statistics into account, the Order states that there exists a digital divide in India, particularly between the rural and urban areas. Also, the extent of advances made in improving digital literacy and digital access falls short of penetrating the majority of the population in the country.

In light of the above, the Court has directed the Union of India to provide the following clarifications:

" · It may not be feasible to require the majority of our population to rely on friends/NGOs for digital registrations over CoWIN, when even the digitally literate are finding it hard to procure vaccination slots.

· The issue of over-crowding may also arise at CSCs in rural areas where people would have to visit constantly in hope of a vaccine slot opening up.

· Certain vaccination centres may be earmarked for on-site registrations for the population aged between 18-44 years without the existing conditions prescribed in the circular dated 24 May 2021, potentially with a view to prioritize those with co-morbidities/disabilities/other socio-economic vulnerabilities. Alternatively, whether specific daily quotas may be introduced for on-site registration at each centre or specific centres.

· This policy may not allay the issue of hesitancy which may arise from approaching a State authority (such as the District Immunization Task Force) to obtain registration for the vaccination. Whether on-site registration with self-attestation of age to ensure widespread vaccination can be provided.

· Conducting a disability audit for the CoWIN website and other IT application like Aarogya Setu to ensure that they are accessible to persons with disabilities."

Further, referring to the accessibility barriers, the Court has listed the issues which afflict the portal:

"(i) Audio or text captcha is not available;

(ii) The seven filters, which inter alia, include age group, name of vaccine and whether the vaccine is paid or free, are not designed accessibly. This issue can be addressed by creation of a drop-down list;

(iii) While visually challenged persons can determine the number of available vaccine slots, one cannot find out the day those slots correspond to. This can be resolved by ensuring that table headers correspond to associated cells;

(iv) Keyboard support for navigating the website is absent; (v) Adequate time should be given to disabled users to schedule their appointment without the possibility of being automatically logged off; and

(vi) Accessibility protocols, such as use of appropriate colour contrasts, should be adhered to."

The Affidavit submitted by Union of India had contended that CoWin portal allowed the registration of four persons using the same mobile number, and that as all Gram Panchayats had CSCs, it would effectively enable people residing in rural areas to get registered online for vaccination.

It had further been averred that walk-ins could not be permitted due to the scarcity of vaccines and fear of over-crowding at centres. Online registration would counter this fear and also monitor administration of second dose. Walk-in vaccination facilities would however continue for persons over 45 years in separate, designated vaccination centres.

The Court flagged several issues with the Centre's vaccine policy, and observed that the policy of paid vaccination to 18-44 years is prima facie "arbitrary and irrational". The Court also sought to know how the budgetary allocation of Rs.35,000 crores have been spent to procure vaccines and why they can't be used to provide free vaccination to 18-44 years age group. Concerns were also raised about the "digital divide" in accessing Co-Win portal for getting vaccine slots.

Also Read other reports about the order :