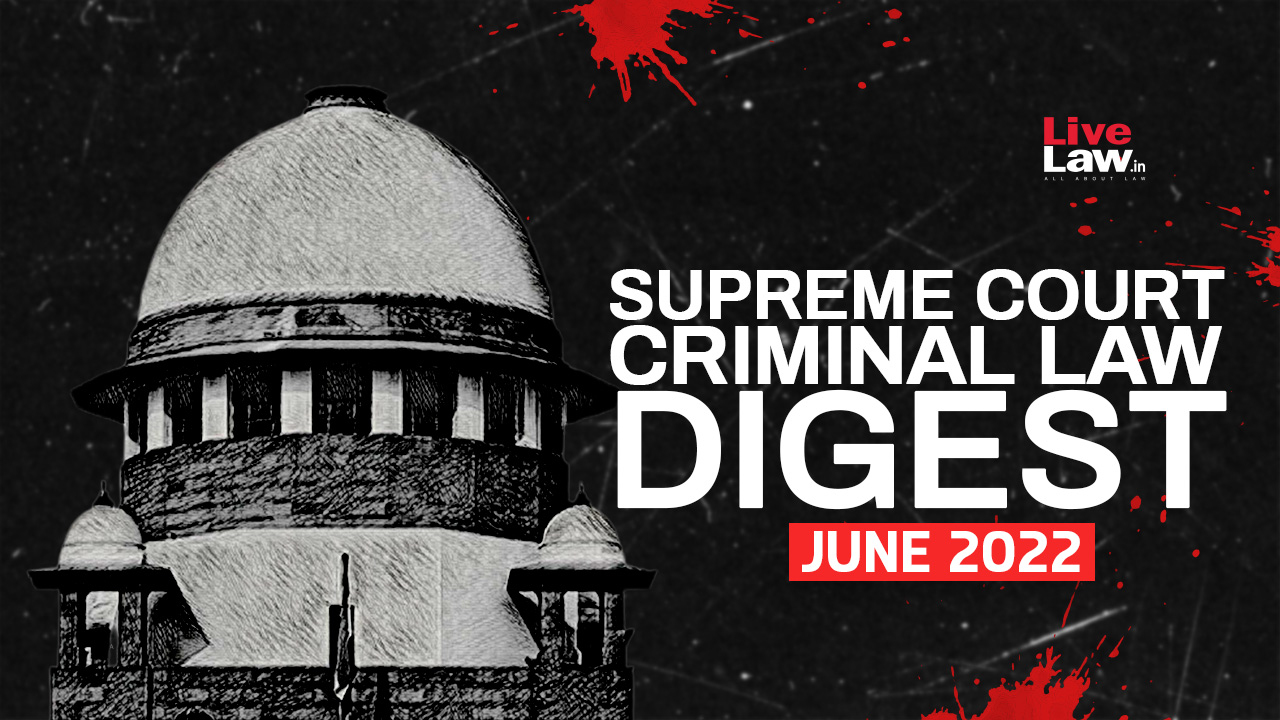 Code of Criminal Procedure 1973; Section 311 - Merely because a different statement given by the same prosecution witness in another case that itself would not be a reason for recalling the witness. Saud Faisal v. State of Uttar Pradesh, 2022 LiveLaw (SC) 556 Code of Criminal Procedure 1973; Section 482 - While exercising jurisdiction under Section 482 of the Cr.P.C., the High...

Code of Criminal Procedure 1973; Section 311 - Merely because a different statement given by the same prosecution witness in another case that itself would not be a reason for recalling the witness. Saud Faisal v. State of Uttar Pradesh, 2022 LiveLaw (SC) 556

Code of Criminal Procedure 1973; Section 482 - While exercising jurisdiction under Section 482 of the Cr.P.C., the High Court should not ordinarily embark upon an enquiry into whether there is reliable evidence or not. The jurisdiction has to be exercised sparingly, carefully and with caution only when such exercise is justified by the specific provisions of Section 482 of the Cr.P.C. itself. Jagmohan Singh v. Vimlesh Kumar, 2022 LiveLaw (SC) 546

Code of Criminal Procedure 1978; Section 438 - Anticipatory Bail - Court is expected to pass orders in one way or other taking into account the merits of the matter at the earliest - Posting an application for anticipatory bail after a couple of months cannot be appreciated - Matter involves personal liberty. Sanjay v. State (NCT of Delhi), 2022 LiveLaw (SC) 555

Code of Criminal Procedure, 1973; Section 220(1) - trial for more than one offence - if in one series of acts so connected together as to form the same transaction, more offences than one are committed by the same person, he may be charged with, and tried at one trial for, every such offence - it is not possible to enunciate any comprehensive formula of universal application for the purpose of determining whether two or more acts constitute the same transaction - the circumstances of a given case indicating proximity of time, unity or proximity of place, continuity of action and community of purpose or design are the factors for deciding whether certain acts form parts of the same transaction or not - a series of acts whether are so connected together as to form the same transaction is purely a question of fact to be decided on the aforesaid criteria. - for several offences to be part of the same transaction, the test which has to be applied is whether they are so related to one another in point of purpose or of cause and effect, or as principal and subsidiary, so as to result in one continuous action. [Para 20.1 - 20.3] Ms. P XXX v. State of Uttarakhand, 2022 LiveLaw (SC) 554

Constitution of India, 1950; Article 22 - Preventive Detention - the powers to be exercised under this law are exceptional powers which have been given to the government for its exercise in an exceptional situation -A law and order situation can be dealt with under the ordinary law of land. (Para 12 & 13) Shaik Nazneen v. State of Telangana, 2022 LiveLaw (SC) 559

Constitution of India, 1950; Article 356 - Breakdown of Constitutional machinery - Law & Order - Gujarat Riots case - Breakdown of law-and-order situation if for short duration,cannot partake the colour of breakdown of rule of law or constitutional crisis. To put it differently, misgovernance or failure to maintain law-and-order during a brief period may not be a case of failure of constitutional machinery in the context of tenets embodied in Article 356 of the Constitution-There must be credible evidence regarding State sponsored breakdown of law-and-order situation; not spontaneous or isolated instances or events of failure of State administration to control the situation. (Para 45) Zakia Ahsan Jafri v. State of Gujarat, 2022 LiveLaw (SC) 558

Control of Terrorism and Organized Crime Act, 2015 (Gujarat) - To invoke this Act in respect of such an activity more than one charge-sheet must have been filed before a competent Court in the preceding ten years- Bail granted to accused as only one chargesheet has been filed against him. Mohamad Iliyas Mohamad Bilal Kapadiya v. State of Gujarat, 2022 LiveLaw (SC) 538

Criminal Trial - Motive - Only because the motive is established, the conviction cannot be sustained. (Para 23) Mahendra Singh v. State of M.P., 2022 LiveLaw (SC) 543

Criminal Trial - Witnesses are of three types, viz., (a) wholly reliable; (b) wholly unreliable; and (c) neither wholly reliable nor wholly unreliable. When the witness is "wholly reliable", the Court should not have any difficulty inasmuch as conviction or acquittal could be based on the testimony of such single witness. Equally, if the Court finds that the witness is "wholly unreliable", neither conviction nor acquittal can be based on the testimony of such a witness. It is only in the third category of witnesses that the Court has to be circumspect and has to look for corroboration in material particulars by reliable testimony, direct or circumstantial. Mahendra Singh v. State of M.P., 2022 LiveLaw (SC) 543

Death Sentence - Death sentence being awarded and maintained only in extreme cases, does not mean that the matter would be approached and examined in the manner that death sentence has be avoided, even if the matter indeed calls for such a punishment - The pursuit in collecting mitigating circumstances could also not be taken up with any notion or idea that somehow, some factor be found; or if not found, be deduced anyhow so that the sentence of death be forsaken - It has never been the effort of the Courts to somehow make this punishment (sentence of death) redundant and non-existent for all practical purposes. (Para 54) Manoj Pratap Singh v. State of Rajasthan, 2022 LiveLaw (SC) 557

Death Sentence - Death sentenced imposed on man for rape and murder of 8 year old mentally and physically challenged girl upheld- The crime had been of extreme depravity, which shocks the conscience, particularly looking to the target (a seven-and-a-half-year old mentally and physically challenged girl) and then, looking to the manner of committing murder, where the hapless victim's head was literally smashed, resulting in multiple injuries including fracture of frontal bone - No probability of reformation and has criminal antecedents and also involved in crimes in jail post-conviction - There is absolutely no reason to commute the sentence of death to any other sentence of lesser degree. (Para 58) Manoj Pratap Singh v. State of Rajasthan, 2022 LiveLaw (SC) 557

Death Sentence - There cannot be any universal formula for calling for a psychological evaluation report to determine whether the accused could be reformed or rehabilitated. (Para 56.1) Manoj Pratap Singh v. State of Rajasthan, 2022 LiveLaw (SC) 557

Death Sentence -The theory of residual doubt - After the final conclusion on the guilt and after pronouncing conviction, no concept of residual doubt as such is available for the purpose of sentencing. (Para 48 - 49) Manoj Pratap Singh v. State of Rajasthan, 2022 LiveLaw (SC) 557

Evidence Act, 1872; Section 114 - If a man and a woman live together for long years as husband and wife, there would be a presumption in favour of wedlock. Although, the presumption is rebuttable, a heavy burden lies on him who seek to deprive the relationship of legal origin to prove that no marriage took place. (Para 15 -20) Kattukandi Edathil Krishnan v. Kattukandi Edathil Valsan, 2022 LiveLaw (SC) 549

Gujarat Riots 2002 - Plea for probe into alleged larger conspiracy by high state functionaries dismissed- Upholds SIT's closure report exonerating Narendra Modi and 63 other high officials - Held, Conspiracy cannot be readily inferred merely on the basis of the inaction or failure of the State administration -inaction or failure of some officials of one section of the State administration cannot be the basis to infer a pre- planned criminal conspiracy by the authorities of the State Government or to term it as a State sponsored crime (violence) against the minority community. (Para 44 - 47) Zakia Ahsan Jafri v. State of Gujarat, 2022 LiveLaw (SC) 558

Penal Code 1860; Section 120B - Criminal Conspiracy - To make out a case of larger criminal conspiracy, it is essential to establish a link indicative of meeting of minds of the concerned persons for commission of the crime(s). (Para 44) Zakia Ahsan Jafri v. State of Gujarat, 2022 LiveLaw (SC) 558

Penal Code, 1860; Section 96-106 - Right of Private Defence - Accused need not prove the existence of private self-defence beyond reasonable doubt and that it would suffice if he could show that the preponderance of probabilities is in favour of his plea, just as in a civil case. (Para 12) Ex.Ct. Mahadev v. Director General, Border Security Force, 2022 LiveLaw (SC) 551

Penal Code, 1860; Section 96-106 - Right of Private Defence - The right of private defence is necessarily a defensive right which is available only when the circumstances so justify it. The circumstances are those that have been elaborated in the IPC. Such a right would be available to the accused when he or his property is faced with a danger and there is little scope of the State machinery coming to his aid. At the same time, the courts must keep in mind that the extent of the violence used by the accused for defending himself or his property should be in proportion to the injury apprehended. This is not to say that a step to step analysis of the injury that was apprehended and the violence used is required to be undertaken by the Court; nor is it feasible to prescribe specific parameters for determining whether the steps taken by the accused to invoke private self-defence and the extent of force used by him was proper or not. The Court's assessment would be guided by several circumstances including the position on the spot at the relevant point in time, the nature of apprehension in the mind of the accused, the kind of situation that the accused was seeking to ward off, the confusion created by the situation that had suddenly cropped up resulting the in knee jerk reaction of the accused, the nature of the overt acts of the party who had threatened the accused resulting in his resorting to immediate action, etc. The underlying factor should be that such an act of private defence should have been done in good faith and without malice. Ex.Ct. Mahadev v. Director General, Border Security Force, 2022 LiveLaw (SC) 551

Telangana Prevention of Dangerous Activities of Bootleggers, Dacoits, Drug-Offenders, Goondas, Immoral Traffic Offenders, Land Grabbers, Spurious Seed Offenders, Insecticide Offenders, Fertiliser Offenders, Food Adulteration Offenders, Fake Document Offenders, Scheduled Commodities Offenders, Forest Offenders, Gaming Offenders, Sexual Offenders, Explosive Substances Offenders, Arms Offenders, Cyber Crime Offenders and White Collar or Financial Offenders Act ,1986; Section 3(1) - A bare reading of the aforesaid provision shows that the "maintenance of public order" has a crucial bearing here and unless the government is justified in holding that the act of the detenu is prejudicial to the maintenance of public order, the preventive detention would be bad and would be in violation of Articles 21 and 22 of the Constitution of India as it encroaches upon the liberty and freedom of an individual. (Para 9) Shaik Nazneen v. State of Telangana, 2022 LiveLaw (SC) 559