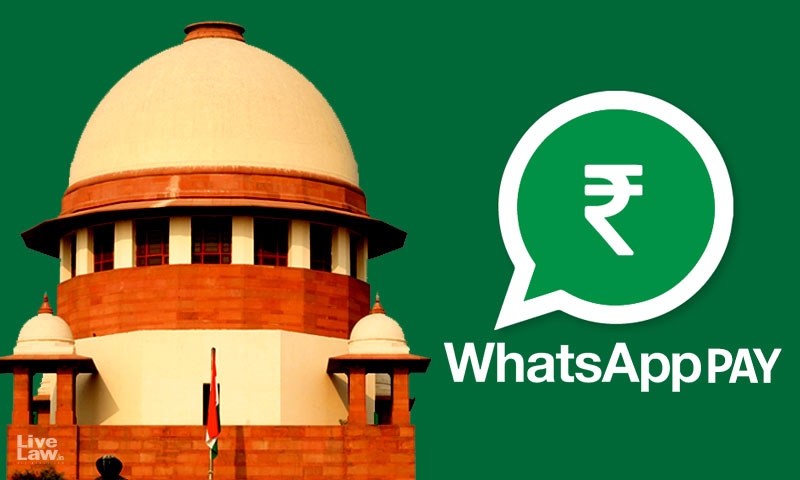 The Supreme Court on Thursday issued notice in an Impleadment Application, filed in a plea pertaining to data protection on Unified Payments Interface (UPI) platforms, which states that WhatsApp Pay is all set to launch full-scale operations in India despite the instant petition being pending before the Court. A Bench headed by Chief Justice of India SA Bobde heard the submissions of...

The Supreme Court on Thursday issued notice in an Impleadment Application, filed in a plea pertaining to data protection on Unified Payments Interface (UPI) platforms, which states that WhatsApp Pay is all set to launch full-scale operations in India despite the instant petition being pending before the Court.

A Bench headed by Chief Justice of India SA Bobde heard the submissions of Senior Advocate Vikas Singh, appearing on behalf of the Applicant, and proceeded to issue notice in the IA.

The matter has now been adjourned to Monday, 1st February.

The impleading application, filed by one Yedhu Menon, who claims to be a tech expert, through Advocate-on-Record Deepak Prakash, submits that one of the main prayers in the plea was a direction to RBI and NPCI to ensure that WhatsApp "is not permitted to launch full-scale operations of 'WhatsApp Pay' in India, without fulfilling all legal compliances to the satisfaction of this Hon'ble Court regarding the requisite regulatory compliances".

In this context, it is stated in the IA that it has come to the knowledge of the Applicant through various media reports that WhatsApp Pay is set to launch full-scale operations in India, after obtaining permission from RBI and NPCI, despite the instant plea pending before the Court and without satisfying the Court regarding requisite regulatory compliance.

"Pertinently, some of the prominent issues, with respect to the launch of full-scale operations of WhatsApp Pay in India vis-à-vis non-compliance of rules and regulations and violation of fundamental rights guaranteed under the Constitution of India still remain unaddressed and the same have not been raised…", contends the IA.

In light of the above, the IA prays for impleadment in the present petition as it raises issues of national security, sovereignty and integrity, along with issues relating to data privacy and security of Indian citizens.

On 15th October, 2020, notice was issued by the Supreme Court in the main petition filed by CPI Rajya Sabha MP Binoy Viswam, which seeks for "the protection of fundamental right to privacy of millions of Indian citizens who are using Unified Payments Interface (UPI)".

In a Counter-Affidavit filed recently by the RBI, it has been submitted that the responsibility to ensure that companies like Amazon, Google and WhatsApp to operate in compliance with laws governing Unified Payments Interface (UPI) lies with NPCI, and not RBI.