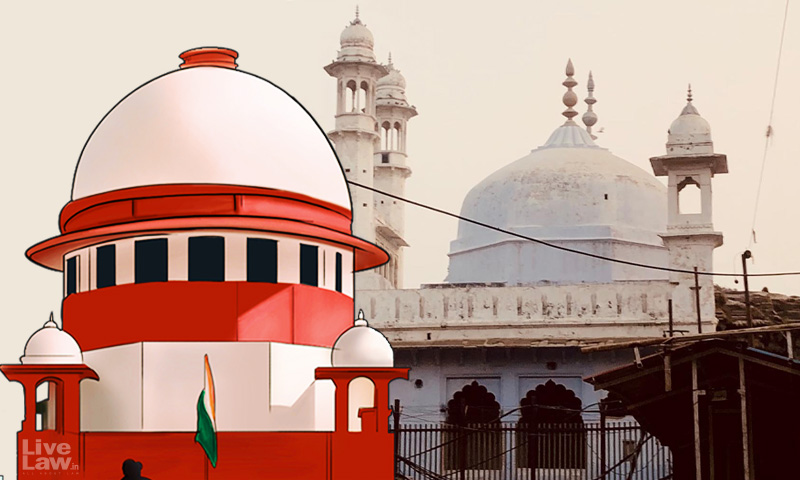 When the matter was taken, Advocate Vishnu Shankar Jain submitted that Advocate Hari Shankar Jain, who represents the plaintiffs before the civil court, was discharged from the hospital only yesterday and requested for adjournment till tomorrow.

Senior Advocate Huzefa Ahmadi, appearing for the Masjid Committee, submitted that the trial court is hearing today applications seeking to alter the wall of the wazukhana of the mosque, and prayed that the proceedings should be stayed if the hearing is getting deferred.

"We'll keep it tomorrow but don't proceed before the trial court today since they have apprehension", Justice Chandrachud told Jain.

Jain agreed to not press the proceedings before the trial court till tomorrow.

"We accordingly direct trial court to strictly act according to the arrangement as here and it should desist from passing any orders", the bench stated in the order. The bench will hear the matter tomorrow.

The bench of Justices DY Chandrachud, Surya Kant and PS Naramsimha was considering petition filed by the Masjid Committee challenging the survey ordered by the Varanasi court.

On May 17, the Top Court clarified that the order passed by the Civil Judge Senior Division at Varanasi to protect the spot where a "shiv ling" was claimed to have been found during the survey of the Gyanvapi mosque will not restrict the right of Muslims to access the mosque to offer namaz and to perform religious observances. It had also directed the District Magistrate concerned to ensure that the place inside the Mosque where 'Shiv Ling' is stated to have been found is protected. However, it ordered that this should not restrict the right of Muslims to offer Namaz and religious observances.

The bench passed this clarification after noticing that the operative portion of the Varanasi Court's order had stated that the application filed by the plaintiff has been allowed, although the specific direction issued by it was to seal the spot and to protect the sealed spot and to restrict the entry of people into the sealed spot. However, the application filed by the plaintiff had sought for several reliefs, such as to restrict the number of Muslims entering the mosque for offering namaz as 20 and to prohibit them from performing "wazu" (ablution process).

Another suit was filed in 2021 by female devotees and worshippers of Lord Shiva, practicing the vedic sanatan hindu dharma before Civil Senior Judge, Varanasi seeking "restoration of performance of rituals at principal seat of an Ancient Temple" at the Gyanvapi mosque area"