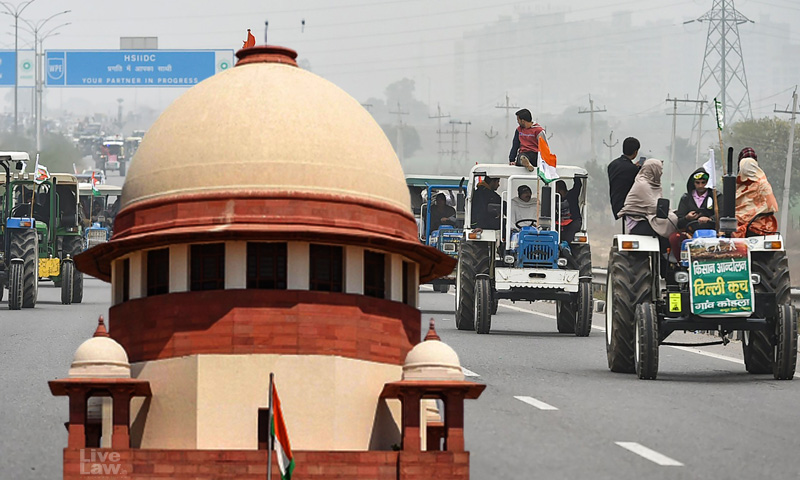 The Supreme Court on Tuesday issued notice on an application filed by the Delhi Police seeking for an injunction against the tractor rally proposed to be carried out by farmers in Delhi on the Republic Day to show their protest against the contentious farm laws.The bench said that it will consider the application after service of notice on the farmers unions on Monday, January 18. A...

The Supreme Court on Tuesday issued notice on an application filed by the Delhi Police seeking for an injunction against the tractor rally proposed to be carried out by farmers in Delhi on the Republic Day to show their protest against the contentious farm laws.

The bench said that it will consider the application after service of notice on the farmers unions on Monday, January 18.

A Bench comprising of Chief Justice of India SA Bobde, and Justices AS Bopanna and V. Ramasubramanian assembled today to pass orders on a batch of petitions praying for the removal of protesting farmers near the borders of Delhi as well as another set of pleas challenging the three contentious Farm Laws.

In today's hearing, Senior Advocate Harish Salve, appearing for a petitioner seeking to remove the protesters,  submitted to the Bench that the Republic Day parade "must go unblemished". To this, the CJI stated that Senior Advocate Dushyant Dave had undertaken during yesterday's proceedings that there would be no tractor rally.

However, Salve informed the Bench that Dave was not present during today's proceedings and that the Delhi police has filed ant Application to injunct the impending rally.

Attorney-General KK Venugopal stated to the Bench that there would be "no question of huge group of 1 lakh people entering the city on Republic Day" as there would be no knowing where they would go.

In response to this, the CJI informed the AG that it was within the powers of the police to control that as well check if the protestors were armed.

The AG then submitted that the protestors had expressed that a tractor rally would take place on Republic Day, and consequently the instant Application had filed by Delhi Police to injunct the same.

Accordingly, the Bench proceeded to issue notice and listed the matter for next Monday.

CJI to AG : If there is an infiltration by a banned organization, and somebody is making an allegation here on record, you have to confirm it. You file an affidavit by tomorrow.

AG : Yes. I will filed the affidavit and place the IB records.#FarmersProtests #SupremeCourt

The Attorney General also told the bench that Khalistanis have infiltrated the protests. On this, the bench asked the AG to file an affidavit by tomorrow on the alleged presence of banned organizations in the protests.

The Application filed by Delhi Police states that it has come to the knowledge of security agencies that "a small group of protesting individuals/organisations have planned to carry out a tractor/trolley/vehicle march on Republic Day" and that the march is "slated to disturb and disrupt" the parade as well as create a law and order situation, thereby causing embarrassment to the nation.

Highlighting that right to protest is subject to the countervailing public order and public interest, the Application submits that the right cannot include "maligning the nation globally". Noting that the Supreme Court is seized of the issues pertaining to the constitutionality of the Farm Acts and the Farmers' protests, the Application seeks for the Top Court to pass an injunction restraining such protest march scheduled on Republic Day.

"Therefore, it is requested that this Hon'ble Court be pleased to pass an order of injunction restraining anyone to conduct any protest march either in the form of tractor march, trolley march, vehicle march or any other mode into the National Capital Region territory of Delhi on 26th January, 2021".

The Application then lists the routes that have been fully blocked due to the continuing protests and presents the chronology of events that are due to take place on account of Republic Day, beginning with the grand rehearsal on 23rd January and ending with Martyrs Day on 30th January.

In light of the above, the Delhi Police has prayed for an order of injunction to be passed accordingly.

At the end of the hearing, the CJI said that the Court will pass an order today to suspend until further orders the implementation of the three farm laws :

The bench also said that it was forming a Committee to hold talks between the protesting farmers and the government.

CJI SA Bobde mentioned the names of Agricultural economist Ashok Gulati, Bhupinder Singh Mann, President BKU and All India Coordination Committee, Pramod Kumar Joshi( Director South Asia international Food Policy), Anil Ghanwat (Shethkari Sangathan) to be the members of the Committee, that is expected to resolve the deadlock between Government and protesting farmers. A complete order will be released by the Court, by the end of the day.