Supreme Court Issues Notice On Delhi Police Appeal Against Bail Granted To Student Activists In Riots Case; Says HC Judgment Shall Not Be Treated As Precedent In Meantime 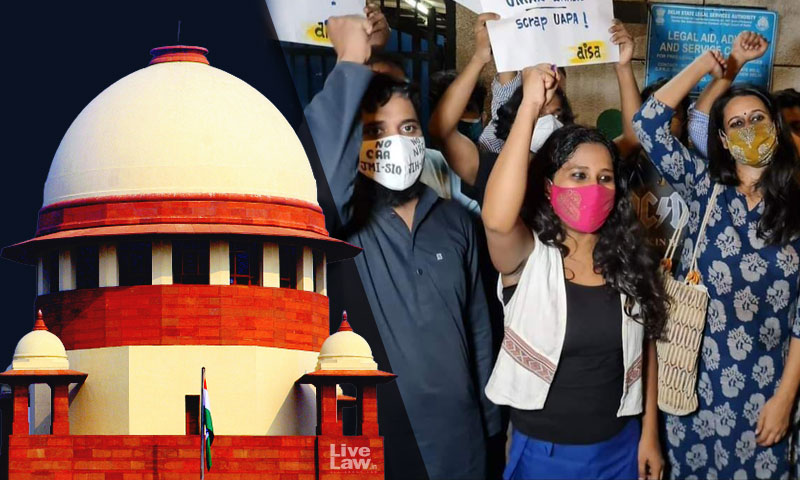 x
The Supreme Court clarified that it is not interfering with the bail granted to the students at this stage.

Issuing notice on the appeal filed by the Delhi Police against the Delhi High Court order granting bail to 3 student activists in the Delhi riots conspiracy case, the Supreme Court on Friday said that the impugned judgment shall not be be treated as a precedent until the matter is finally decided.However, the Court said that it was not interfering with the bail granted to the activists...

Issuing notice on the appeal filed by the Delhi Police against the Delhi High Court order granting bail to 3 student activists in the Delhi riots conspiracy case, the Supreme Court on Friday said that the impugned judgment shall not be be treated as a precedent until the matter is finally decided.

The bench said that it was "troubling" that the High Court has gone on to narrow down the scope of UAPA in a bail application when there was no challenge to the statute.

After the admission hearing, the bench passed the following order.

In today's hearing, Solicitor General Tushar Mehta, appearing for the Delhi Police, began by saying that the High Court has "turned the UAPA on its head". The top law officer of the Union urged the bench to stay the impugned Judgment, saying that it might affect other cases in the Delhi riots matter.

"Lawyers are moving for bail relying on this. It is virtually an acquittal order. Trial courts will have to entertain a discharge application and replace it with this judgment," he told the Bench.

He argued that the riots happened because the three accused conspired with others when the President of US was visiting. 53 persons died in the riots of which many were police officers. Further, 700 people were injured. But since the situation was controlled, the High Court made wide ranging observations and said that offence is not made out.

"That means, If I put a bomb somewhere and the squad diffuses the bomb, then it reduces the offence," Mehta remarked.

The Bench suggested that it may direct that the judgment will not have precedent value until the appeal is decided.

To this, Mehta responded, "Right to protest, how does it include right to kill people? I am reiterating my request for stay."

The Solicitor said that he was not objecting to the three activists remaining outside on bail at this stage but urged that the effect of the judgment should be stayed.

"If this judgment is to be accepted, the lady who assassinated the Prime Minister is also innocent, because in her mind also, she was only protesting", the SG said.

Senior Advocate Kapil Sibal, who appeared for the respondents, urged the bench to not stay the judgment and instead say that it will not be treated as a precedent in the meantime.


The Delhi High Court in its judgments dated 15th June found that offences under the Unlawful Activities Prevention Act (UAPA) were prima facie not made out against student leaders Asif Iqbal Tanha, Natasha Narwal, and Devangana Kalita in the Delhi riots conspiracy case. Going by the allegations in the chargesheet, the accused were only leading protests. The High Court said that there was no specific or particularized allegations against the accused relating to terrorist activities.


Yesterday, the three were finally released from Tihar Jail. The development came after a Delhi Court issued orders for their immediate release earlier after observing that Delhi Police's argument saying that more time was needed to verify the addresses of the accused and their sureties, cannot be a plausible reason for keeping them imprisoned.

The Delhi Police had filed a chargesheet against them alleging that the protests organized by them against the Citizenship Amendment Act from December 2019 were part of a "larger conspiracy" behind the North East Delhi communal riots which took place in the last week of February 2020.

However, the High Court Bench comprising Justices Siddharth Mridul and Anup Jairam Bhambhani, after a preliminary analysis of the chargesheet, observed that the allegations did not prima facie constitute the alleged UAPA offences relating to terrorist activities (Sections 15,17 and 18).