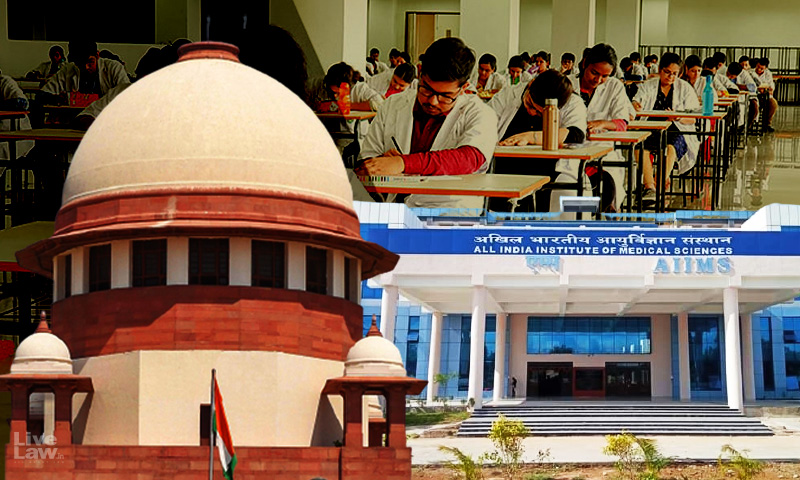 While hearing a plea seeking direction to AIIMS to have a defined criteria for arriving at seat matrix for institutional preference candidates in INI-CET examination, the Supreme Court, on Friday, directed all AIIMS Institutes to adopt roster based reservation followed by Jawaharlal Institute of Postgraduate Medical Education and Research, Pondicherry (JIPMER).

"We direct that the roster point based reservation for preferential candidates as followed by JIPMER be implemented in all the AIIMS. However, the roster points need not be similar to that of JIPMER."

On the last date of hearing, the Court was informed that apart from AIIMS, Bhubaneswar and AIIMS, Jodhpur, all other AIIMS before the Apex Court has agreed to implement the roster-based reservation system followed by JIPMER Puducherry for their institutional preference candidates. Advocate, Mr. Dushyant Parashar, appearing on behalf of AIIMS, New Delhi was asked to get instructions from AIIMS, Bhubaneswar and Jodhpur so that the Court can pass appropriate orders on the next date of hearing.

On Friday, Ms. Charu Mathur Bench, appearing for the petitioner impelled the Bench comprising Justices L. Nageswara Rao and A.S. Bopanna to record in the order that the roaster system would be applicable from this year. Mr. Parashar informed it that since new software is to be put in place for counselling, it might cause some delay. Accordingly, the Bench stated -

"We will say it would apply for this year, but you (AIIMS) can come later in case of delay."

As the Counsel for AIIMS Jodhpur and Bhubaneswar appeared before the Bench, Justice Rao remarked -

"If all the AIIMS have agreed then what is your problem? We will say for all AIIMS."

"AIIMS, New Delhi and all other AIIMS submit that they will follow the philosophy of the JIPMER system and create their own rosters."

In 2020-21, AIIMS, JIPMER Puducherry, NIMHANS Bengaluru, PGIMER Chandigarh, SCTIMST Trivandrum were identified as institutes of national importance for the purpose of admission to PG medical courses. Even after the introduction of NEET, AIIMS continued conducting its own examination. In 2020, a new test, namely, INI-CET was developed for admission to PG courses of some AIIMS colleges and other institutions of national importance. It is a computed based test conducted twice a year by AIIMS, New Delhi. The INI-CET provides for two channels of admission - institutional preference (50%) and open competition (50%). It is pertinent to note that the eligibility criteria for admission to general and reserved seats for candidates from both the channels are the same. Amongst all the institutes of National Importance only JIPMER Puducherry provides for a mechanism for allocation of seats to institutional candidates. It has adopted a roster system for allocation of seats to institutional preference candidates.

The present petition was filed by the Association of Students of AIIMS Bhopal and prospective candidates or candidates who have appeared for INI CET examination.

The petition was filed through Dubey Law Chambers.

By way of an affidavit dated 20.01.2022, the Bench was apprised that pursuant to a meeting held on 28.06.2020, AIIMS New Delhi was willing to provide a roster-point based reservation for its institutional preference candidates. It stated that the reservation would be similar to the one adopted by JIPMER, but the actual roster points for AIIMS would be different from JIPMER as the same would depend on the percentage of seats decided to be allocated to the preferential candidates. It emphasised that if the roster-based system is implemented then the order of the Apex Court in AIIMS Students' Union v. AIIMS And Ors. (2002) 1 SCC 428 would not be applicable. The relevant portion is as under -

"63. …(i) That the last student to qualify for admission as AIIMS graduate cannot be one who has secured marks at the common entrance PG test less than the one secured by any other candidate belonging to reserved category enjoying constitutional protection such as SC,ST etc. and (ii) that the margin of difference between the qualifying marks for the Institute's candidate shall not be too wide with the one for the general category candidate."