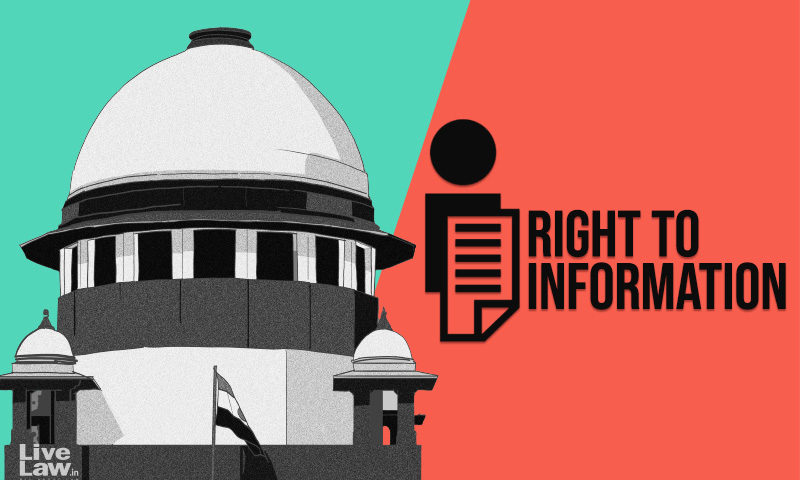 The Supreme Court on Wednesday directed Union of India and all States to file status reports on the latest developments regarding vacancies and pendency in the Central Information Commission (CIC) and State Information Commissions (SICs). A Bench headed by Justice S. Abdul Nazeer issued the direction in a 2018 plea filed by RTI activists Anjali Bhardwaj, Amrita Johri and...

Subscription starts from
₹ 599+GST
(For 6 Months)
View Plans
Premium account gives you:
Subscribe Now
Already a subscriber?
Login
The Supreme Court on Wednesday directed Union of India and all States to file status reports on the latest developments regarding vacancies and pendency in the Central Information Commission (CIC) and State Information Commissions (SICs).

A period of four weeks has been accorded to the Union and the States to file their status reports. Liberty has also been granted to the Petitioner to file an Additional Affidavit.

The matter will now be heard after four weeks.

In today's hearing, Advocate Prashant Bhushan, appearing for the Petitioners, submitted to the Court that directions were given in 2019 to fill the posts well in time with the Apex Court deprecating the practice of selection of bureaucrats to either run the Commission or to be a part of the Selection Committee.

"Despite repeated directions, there are still 3 vacancies. Not only that, what they have done is quite shocking. They have not placed either the names of the candidates or the selection criteria on record. More than 300 people applied, but they shortlisted 7 people. What was the criteria, what were the details, nothing is on record", argued Bhushan.

He further contended that while one person was selected, there were three vacancies remaining. Additionally, he stated that party members and supporters were being selected – "Some bogus journalist, basically a party journalist was appointed as an Information Commissioner. Criteria was also not given. This was deprecated by the Supreme Court. Either they are vacant or they fill them up with party supporters who shield their acts."

He concluded his submissions by stating that due to the vacancy in posts, pendency was going up, thereby destroying the purpose of the RTI Act which had been brought in pursuant to Supreme Court judgements wherein Right to Information had been upheld.

Additional Solicitor General Madhavi Divan, appearing for the Union, submitted that the process of compliance had been carried out and appointments were made in March 2020, with a compliance affidavit being filed regarding the same on April 24, 2020.

At this juncture, Bhushan suggested that as the Affidavit had been filed a year ago, directions could be given to the Respondents to put on record subsequent changes that had taken place as well as the shortlisting criteria; this should include existing vacancies and the number of people who had been shortlisted, along with their names.

Divan, however, countered that the compliance affidavit was filed in accordance with directions given in Para 30 of the December 2019 order of the Supreme Court. Further, she submitted that accusations could not be levelled against members of the Commission.

"They cannot make accusations or call the members bogus journalists. The maximum strength is up to 10 members. That does not mean that there are vacancies. Right now, we have 7 members. If they are aggrieved by subsequent developments or by our Affidavit, then they should say so on Affidavit", said Goradia-Divan.

The Bench, however, stated that they wanted to be apprised of the latest position.

"We will grant you four weeks' time and you file the latest report. Then we will take a call on this. Petitioner is also granted the liberty to file an affidavit", directed the Court.

On 15 February 2019, the Supreme Court Bench of Justices A.K. Sikri and S. Abdul Nazeer had directed Union of India and State Governments to fill vacancies in the CIC and SICs in a transparent and timely manner, i.e. within a period of 6 months.

The directions were given in a PIL filed in April 2018 submitting that over 20,000 cases were pending before the CIC and the same was rising due to the vacancies in posts of the Information Commissioners.

In October 2020, the Petitioners filed an Application seeking for the urgent listing of the matter on the grounds that the Respondents had failed to comply with the directions issued by the Supreme Court, and that the Affidavit filed on April 24, 2020 claiming completion of the process was "patently false, misleading". Further, it had been submitted that despite 300 applications being received for the posts, only one vacancy had been fulfilled and no reason was given for the same.

"It appears that the Union of India is resorting to issuing fresh advertisements instead of filling all the advertised vacant posts in a bid to cause undue delay in the appointments thereby frustrating peoples' right to information", contended the Application.