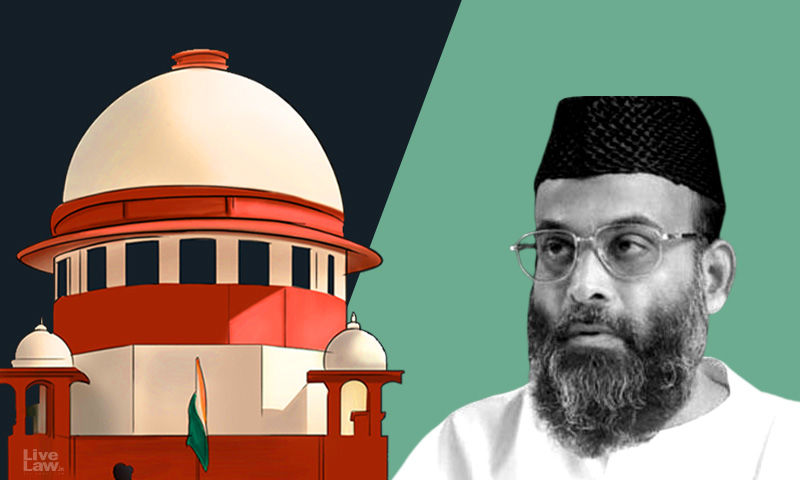 The Supreme Court on Friday dismissed the plea filed by Abdul Nazir Maudany, prime accused in the 2008 serial bomb blast case seeking relaxation of condition imposed by the Apex Court while granting him bail on 11th July 2014 in the 2008 Bengaluru blasts case.A Bench comprising Justice Abdul Nazeer and Justice Krishna Murari issued the direction while hearing an application filed by...

The Supreme Court on Friday dismissed the plea filed by Abdul Nazir Maudany, prime accused in the 2008 serial bomb blast case seeking relaxation of condition imposed by the Apex Court while granting him bail on 11th July 2014 in the 2008 Bengaluru blasts case.

A Bench comprising Justice Abdul Nazeer and Justice Krishna Murari issued the direction while hearing an application filed by Maudany, Kerala-based PDP Chairman, seeking relaxation of bail condition asking him to not leave city of Bangalore, to the extent that he be permitted to travel to his hometown in Kerala till pendency of trial.

At the outset, the Bench asked Advocate Prashant Bhushan appearing for Maudany the grounds on which the relaxation is being sough.

Mr Bhushan further informed the Court that the only evidence claimed against Maudany in charge sheet was that he attended some meeting in which some conspiracy is supposed to be hatched. He is wheel chair bound and his condition has become bad, conditional bail was granted in 2014 and assurance was given that trial will be completed on 4 months. Now 7 years down the line, prosecution evidence is completed, there is no question of tampering with evidence etc.

Advocate Nikhil Goel for State of Karnataka opposed the request for relaxation of bail conditions and informed the Court that while Mr Bhushan said that prosecution evidence is over, he failed to inform the Court that the petitioner has filed recall application for 44 prosecution witness from Kerala and today he wants to go to Kerala.

"There are 9 cases and 200 witnesses in each case were examined. In 7 out of 9 cases, 313 statements for 31 accused is over, its a humongous task that trial court has done.

Mr Goel added that the petitioner is asking for relaxation for condition 2 (confining him to city of Bangalore) which will lead relaxation of condition 4 ( make sure he doesn't communicate any witness).

"These conditions were applied for specific reasons. He has been involved right from Babri Masjid and was an accused in Coimbatore Blast also. He has 24 cases in Kerala! Its for this reason he was asked to stay in Bangalore. His leg was amputated during Babri Masjid in 1992 not now. There are witnesses who have come forward and said they are trying to be influenced. He is not a confined man, he only being surveilled" Mr Goel said.

Mr Bhushan further submitted that the petitioner has never been convicted of any offence in his life. There was attack on him in 1992, he had nothing to do with Babri Masjid. The State said they will complete trial in 4 months back in 2014.

"But Mr Bhushan, he said you've made applications for recall." the Bench said.

Advocate Prashant Bhushan informed the Court that only in some cases where prosecution evidence was changed were recall applications filed. He can be under surveillance in Kerala like he is in Bangalore.

"A man who's never been convicted, has been in jail or conditional bail, the trial is not over for 7 years, he needs to see his father, this is a case where regular bail is granted in these circumstances. I am not even asking for that. Let him be under same conditions, but in his hometown in Kerala. He was acquitted in Coimbatore blast case, he has never been convicted." Mr Bhushan said.

Justice Ramasubramanian had earlier recused from hearing the present matter, and a Bench led by former CJI SA Bobde had directed the matter to be listed before a different Bench.

In the present application, Maudany has sought relaxation of his bail condition, on the ground that the undertaking on the basis of which bail conditions survives have since lapsed and the trial has not been concluded even after 6 years.

The applicant has argued that progress of case before trial court is crawling at snails pace and was hampered on several occasions. The prosecution has miserably failed to adhere to schedule of trial which was also scuttled due to inability to bring witnesses in time. Maudany has contended that there is no Presiding Officers in the trial at present , as after the recent transfer of the officer no other officer has been appointed. This shows that trial may not be concluded anytime soon.

The applicant has further sought the relaxation on the ground that his father suffered a stroke and is in a partially paralysed condition. Also his presence is not argued required at this stage of the trial.

The Apex Court had in 2014 granted Maudany bail till pendency of trial before before the Additional City Civil Judge on grounds that he was an under-trial prisoner and had been judicial custody for 4 years and was suffering from ailments like diabetes, heart disease, etc.

The bail was granted in a special leave petition filed by Maudany challenging order of the Karnataka High Court. After confessions were made by suspected T Nazir, Lashkar-e-Taiba operative linking Madani to the Bangalore blasts that had led to death of one person and injury to 20 others, Abudul Madani was named as the 31st accused in chargesheet filed by the police.