Supreme Court Dismisses PIL To Cancel Offline Board Exams Of Class 10 & 12 Of CBSE, ICSE and State Boards; Says 'Such Petitions Give False Hopes To Students' 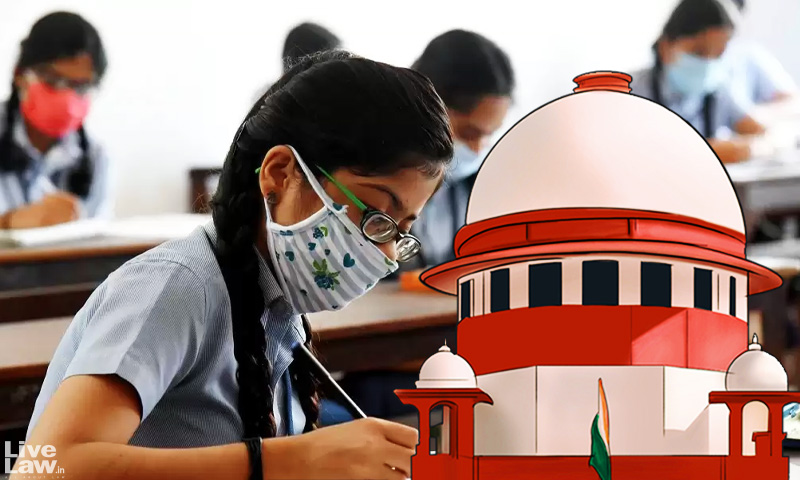 The Supreme Court on Wednesday dismissed a Public Interest Litigation which sought cancellation of offline exams for Classes 10 and 12 to be conducted by all State Boards, CBSE and ICSE.The bench of Justices AM Khanwilkar, Dinesh Maheshwari and CT Ravikumar dismissed the petition observing that it was "ill-advised and premature" as the authorities are yet to take decision regarding the conduct...

The Supreme Court on Wednesday dismissed a Public Interest Litigation which sought cancellation of offline exams for Classes 10 and 12 to be conducted by all State Boards, CBSE and ICSE.

The bench of Justices AM Khanwilkar, Dinesh Maheshwari and CT Ravikumar dismissed the petition observing that it was "ill-advised and premature" as the authorities are yet to take decision regarding the conduct of exams.

The bench said that a Public Interest Litigation seeking this relief was ill-conceived and said that the aggrieved students can challenge the decision of the authorities regarding exams if they are against the relevant rules.

"If the decisions of authorities are not in accordance with rules & the Act, it will be open to aggrieved persons to set challenge in that regard", the bench added in the order.

Advocate on Record Prashant Padhmanabhan, appearing for the petitioner Anubha Shrivastava Sahai, started by referring to the orders passed by the Supreme Court last year in her petition regarding alternate assessment for board exams.

The bench said that what happened in the past cannot be the basis for the present relief.

The counsel then submitted that CBSE has conducted first term exam in offline mode in December 2021 in MCQ mode & results aren't published yet. He added that most state boards have also not published results.

The bench said that the interference last year was due to the particular situation of pandemic then. Expressing disinclination to entertain the petition, Justice Khanwilkar said, "such petitions give false hopes to students. Entertaining such petitions is only increasing confusion in system. What kind of petitions are being filed? Let authorities take decisions. Let authorities take a decision. You can challenge that order".

Observing that the petition is "ill-advised and premature" as the authorities are yet to take decision regarding the conduct of exams, the bench dismissed the petition.

"These kind of petitions will mislead...for the last three days we have been seeing news items everywhere. What kind of petitions are filed & publicity is being given? This has to stop...this will create confusion", Justice Khanwilkar said after dictating the order.

Though the bench said that it will impose heavy costs on the petitioner, it refrained from doing so in the end.

"This has to stop. Don't come up again or there will be exemplary costs. Let students & authorities do their job. You can't PIL like this. Whoever has filed we're saying for that petitioner", Justice Khanwilkar said

It has been stated in the petition that the State Board remained as mute spectator over the current situation and has not taken a timely decision in respect of examination and declaration of final result of crores of students of class X and XII.

Preferred by child rights activist Anubha Shrivastava Sahai, the relief for conducting an improvement exam for those who are not satisfied with internal assessment has also been sought.

Sahai in her petition also sought the relief of constitution of a committee for deciding the formula of assessment of students including compartment students and declaring the result within a time limit and deadline.

The petitioner has also prayed for directing UGC to constitute a committee to declare the date for admission into various Universities and a formula for assessment of Class XII students who want to pursue their further studies in non-professional courses by conducting an aptitude test or some other mode of assessment within a time limit and deadline.

Since MP Government was commencing board exams for class X and XII from 17th February, an urgent interim relief for issuance of directions to the Govt of Madhya Pradesh to not hold the board exam for class X and XII, till the final outcome of the present Writ petition had also been sought.