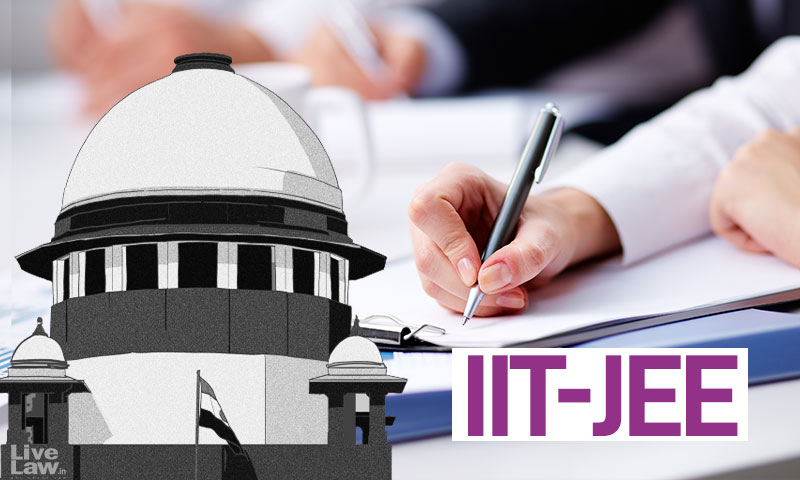 Remarking that the issue which has been raised in the writ fell within "academic/policy domain," the bench of Justices DY Chandrachud and Surya Kant in their order said,

"Plea is that the above exemption should be expanded to include the category of students who appeared in the JEE Advanced in 2020 & 21. It is a well settled principle of law that authority is not obliged to exempt some from the rigors of the rule. The issue which has been raised falls within the academic/policy domain. Claim of the petitioner may appear to be at prima facie level but it is ultimately a policy decision. There is nothing manifestly arbitrary. Petitioners would not be benefitted by the striking of exemption. We are not inclined to entertain this plea."

The impugned notice dated December 30, 2021 issued by Joint Admission Board grants one more chance to appear in the JEE (Advanced) to the students of 2020 batch who:

But the notice makes the students who were not able to qualify JEE Advanced or who were qualified but got low rank ineligible.

While the matter was called for hearing, Justice DY Chandrachud asked, "Where is there a vested right? They have relaxed in case of a specific category. If we strike this down, none will get it. JEE Advance."

Drawing Court's attention to the category of students who were allowed to avail the benefit as per the notice, Senior Advocate Devdatt Kamat for the petitioners submitted that the policy created an unreasonable classification since it was granting students who didn't register for JEE Main in 2020 and 2021 a premium on default.

"We are students who passed the main, took the efforts in the pandemic & weren't able to clear. This policy creates unreasonable classification because you are giving premium on default," submitted Kamat.

The counsel appearing for the IIT submitted that the issue was no longer res integra. Referring to the writ titled Jajati Panda & Ors v UOI and Ors which wherein the bench headed by Justice Khanwilkar had refused to grant extra chance for pertained to extra attempt for JEE Advanced Examination 2021 calling it a policy decision, Counsel further said, "This can't be entertained and its no longer res integral. This was decided. Its a PIL. This issue has been considered in Jajati Panda matter."

Expressing its inclination to not interfere with the relief which were sought, Justice Chandrachud said, "There are 2/3 category of students. You are not aggrieved with the same but you want to expand. Another bench said that these are Matters of policy. For us to say that even for those students who have given 2 exams and allow them would be trenching on policy. They could've said that they could not protect at all. There would've been some logic. The person would have been affected due to CoVID. While the ones who weren't affected appeared."

To further convince the bench, Senior Advocate said, "How can similar set of students where both were facing same hardships be discriminated. We took the effort of taking the exam. Under this circular 250000 have been given the benefits. This is not that we want admission but we only want to participate. Only 20k students took the 2nd attempt."

Terming the decision as being pertaining to "academic/policy" the bench refused to interfere with the plea.

Details Of The Plea

It has been argued in the petition that the impugned notice along with being arbitrary and discriminatory is in the teeth of Top Court's judgement in Vijay Lakshmi v Punjab University 2003 (8) SCC 440.

In the said judgement the Top Court had observed that Question of unequal treatment does not arise if there are different sets of Circumstances.

Against this backdrop, the plea states that, "Now in the present case there are no change in circumstances under which relaxation is being given to the students who failed to qualify the preliminary exam - JEE(Main) and by default could not sit for JEE(Advanced); and to those who did qualify JEE(Main) but did not register for JEE(Advanced); and to those who did not even register for JEE(Main) in the 1st place but such relaxation is being denied to the petitioners herein who qualified JEE(Main) both times and appeared in JEE(Advanced) both times in 2020 and 2021 under same circumstances."

The petition in which the petitioners have sought to allow them to appear in JEE Advanced 2022 is filed through AOR Sachin Sharma.