'Environment More Important Than Your Civil Rights; Once A Forest, Always A Forest Unless De-notified', Says Supreme Court 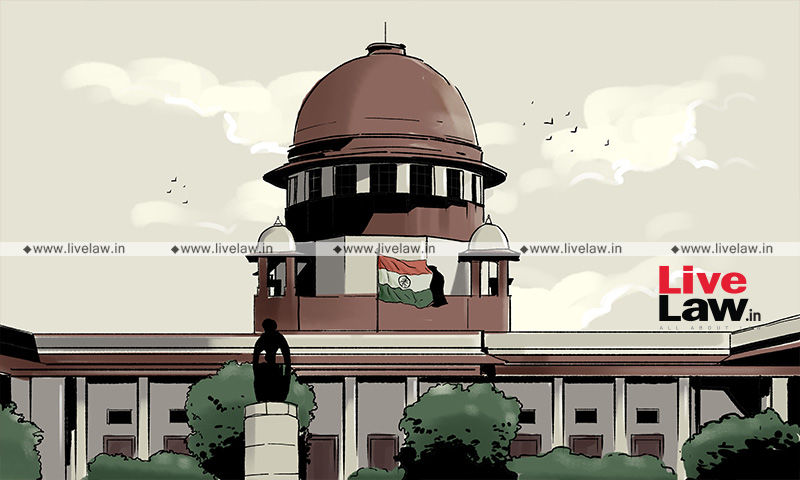 "Environment is more important than your civil rights. Your civil rights are subordinate to the environment. Once a forest, it is always a forest unless it is denotified. The Forest Conservation Act of 1980 also says that", the Supreme Court orally remarked on Tuesday.Underlining the "public trust principle", the Court said, "It is only because of such strict interpretation and exposition by...

"Environment is more important than your civil rights. Your civil rights are subordinate to the environment. Once a forest, it is always a forest unless it is denotified. The Forest Conservation Act of 1980 also says that", the Supreme Court orally remarked on Tuesday.

Underlining the "public trust principle", the Court said, "It is only because of such strict interpretation and exposition by this court that the forest cover is increasing"

The bench of Justices A. M. Khanwilkar, A. S. Oka and C. T. Ravikumar was hearing the pleas which raised the issue regarding forest and non-forest land in reference to interplay between provisions of the Punjab Land Preservation Act, 1900, the Forest Conservation Act, 1980, the Indian Forest Act, 1927 and the land which forms part of development plan under the Faridabad Complex (Regulation and Development) Act, 1971.

In the order of 3.5.2013 impugned in the connected appeals, the NGT passed an interim Order restraining all non-forest activities in the lands notified under section 4 of the Punjab Land Preservation Act, 1900. On appeal, the Supreme Court, at the time of issuing notice, allowed the appellants therein to carry out the business of hosting marriages in the meanwhile. In the impugned order of 16.5.2016 passed on another Original Application, the NGT observed that so far as the aforementioned order of the Apex Court is concerned, the Supreme Court in given facts and circumstances of the case has permitted the Appellant therein to carry out business of hosting marriages pending the decision in the said Appeal. Further, in the impugned order of 16.5.2016, the NGT proceeded to direct the authorities to initiate action prohibiting non-forest activity in accordance with law.

On Tuesday, Senior Advocate Vikas Singh made submissions for the petitioners.

Justice A. M. Khanwilkar observed, "Environment is more important than your civil rights. Your civil rights are subordinate to the environment. Once a forest, it is always a forest unless it is denotified. The Forest Conservation Act of 1980 also says that"

"It is not reservation under town planning scheme. Town planning is a materialistic approach. This is a different scheme, it is an environmental approach. Environment must prevail over all else...35 (Indian Forest Act) is invoked because everybody feels that this area is required to be preserved. Whether private or government land, everything is covered by virtue of this notification. If government land, then section 4 (Indian Forest Act), if otherwise then section 35 notification. The entire area is covered as forest area. Suppose the whole area is government land which is covered by section 4 and some private land is in the centre of that area and for this no notification is issued, does it cease to be a forest? Because of the pressure, some dispensation will issue notification under 35. Because it is a forest area. And it needs to be recognised as forest area", said Justice Khanwilkar.

Continuing, the judge expressed, "'Forest' is not defined. So it has to be understood in common parlance- that this area has been understood as forest area and it has to be so preserved for all times to come...The public trust principle! It is only because of such strict interpretation and exposition by this court that the forest cover is increasing!"

Mr. Singh said, "Yes, Your Lordships, because of the concept of Intergenerational equity. That we have to look at not just this generation but the generations to come"

On Tuesday, after hearing Solicitor General Tushar Mehta (for the state of Haryana) and the petitioners, the bench agreed to also consider an IA by the state seeking permission to act upon the Punjab Land Preservation (Haryana Amendment) Act, 2019 after due publication in the official gazette. Senior Advocate Manoj Swarup also represented some petitioners.

The Supreme Court had on March 1, 2019 asked the Haryana government not to act under the Amendment made to Punjab Land Preservation Act, 1900. The bench comprising Justices Arun Mishra and Deepak Gupta were apprised of some amendments in the Punjab Land Preservation Act, 1900 permitting the construction in the forest area and PLPA region. The bench was told that, even after the order was passed by the Apex court for removal of certain structures in Kant Enclave, the state of Haryana has made certain amendments in Punjab Land Preservation Act, 1900, in order to get rid of the said order. The bench reportedly criticised the state for such a move. It observed that "It is really shocking.You are destroying the forest. It is not permissible. You are not supreme and supreme is the rule of law".

The Haryana Legislature had, the previous week, passed amendments to The Punjab Land Preservation Act, apparently opening up thousands of acres to real estate and other non-forest activity that were protected under it for over a century. As per PTI reports, the Chief Minister M. L. Khattar said the Punjab Land Preservation (Haryana Amendment) Bill, 2019, was the "need of the hour" saying as it was a "very old" act and much has changed over the period of time. The opposition parties had alleged that the bill had been brought by the government to favour the mining mafia and real estate developers by allowing construction in areas where it was previously disallowed, a charge rejected by the treasury benches. It was reported that the amendment would also grant legitimacy to the Kant Enclave in Faridabad, built on the PLPA-notified land. In September, 2018, the bench headed by Justice Madan B. Lokur had ordered the state of Haryana to demolish any construction made in Kant Enclave after 18th August, 1992. The bench had held that Kant Enclave is a forest or is a forest land or is required to be treated as a forest or forest land and absolutely no construction activity could have been permitted on it with effect from 18th August, 1992, the date of notification under Punjab Land Preservation Act, 1900.

Orders impugned in the present appeals

On 3.5.2013, the NGT had passed an interim Order restraining all non-forest activities in the lands notified under Punjab Land Preservation Act, 1900. "It is clear that indisputably non-forest activities are going on in the forest area. Not only non-forest activities but also commercial, industrial and even liquor shops are existing therein which are injurious to the conservation of forest. In view of the above indisputed position we hereby restrain carrying on any non-forest activities as above in the forest area declared in accordance with Notification dated 18th August, 1992 till the next date of hearing. It shall be the duty of the Respondents particularly Haryana Pollution Control Board, and Municipal Corporation of Faridabad to ensure the compliance of this order. Compliance report along with the list of illegal activities shall be prepared and placed before the Tribunal by the next date of hearing. The Corporation shall also serve notices to all parties. Issue copy of this order by Dasti", the NGT had directed.

On appeal, the Supreme Court had passed the following order- "Permission to file Civil Appeal is granted. Learned counsel for the appellants relies upon a decision of this Court rendered in the case of B.S. Sandhu v.government of India and others, 2014 (7) SCALE 390 and contends that the notification in respect of the land in the instant case was issued under Section 3 of the Punjab Land Preservation Act, 1900, and that such a notification would not lead to the unqualified inference that the land indicated in the notification would be forest land. Delay condoned. Issue notice. In the meanwhile, the appellants may carry on their business of hosting marriages"

On 16.5.2016, the NGT disposed off another application moved for seeking directions against the authorities/official Respondents to restrain the ongoing commercial or non-forest activities on certain land in District Faridabad, Haryana notified under Punjab Land Preservation Act, 1900 vide Notification dated 10.04.1992 under Section 3 and Notification dated 18.08.1992 under Section 4 of the said Act.

"According to the applicant, Respondent No. 7- Pawan Singh is carrying on the business of the restaurant under the name and style of Satkar Restaurant Respondent No. 6 in the land referred to hereinabove, and the said land is a forest land being the land notified under the PLP Act. Under Section 4 of the PLP Act, 1900 the applicant contends that non- forest activity such as running restaurant, banquet halls, marriage halls etc. cannot be carried out in the land notified, it being forest land/area in contravention of the provisions of the Section 2 of the Forest Conservation Act, 1980. The applicant, therefore, submits that the authorities respondent Nos. 1, 3, 4 & 5 are under obligation to prevent the violation of the provisions of the Forest Conservation Act by restraining such activities in the aforesaid land. The applicant further submits that the private respondents, Respondent Nos. 6 & 7, who have violated the said provisions and carried/carrying out the non-forest activities in forest area are under obligation to restore the forest area and pay a compensation for the irreparable environmental degradation...Respondent No. 5 – Municipal Corporation of Faridabad admits that non forest activities are being carried out in the area in question and it is bound to take action against the violators as per law. However, it further qualified its say by placing before us the Orders passed by the Hon'ble Supreme Court of India in Civil Appeal (CA No. 10294/13, CA No. 11000/13 and CA No. 8454 of 2014) against the Order dated 03.05.2013 passed by this Tribunal in Original Application No. 42 of 2013; Divesh Bhutani Vs. UOI and 16 others allowing the Appellants therein to carry out the business of hosting marriages vide Order dated 28.10.2013 Annexure R-5/1. The Respondent No. 5 points out that this Tribunal vide Order dated 03.05.2013 was pleased to pass an interim Order restraining all non-forest activities in the lands notified under PLP Act, 1900 in O.A. No. 42/2013 and the Hon'ble Supreme Court of India had permitted the Appellant challenging the said interim Order therein to carry on the business of hosting marriages...Once we come to the conclusion on facts before us that it is a forest area, we have no option but to order the authorities to prevent violations of Forest (Conservation) Act, 1980. Admittedly, respondent nos. 6 and 7 are indulging in non-forest activities of running a restaurant and banquet hall at the land in question without there being any sanction as envisaged under Section 2 of the Forest (Conservation) Act, 1980. As regards the order passed by the Hon'ble Apex Court in Civil Appeal D No. 29996/2013 Narinder Singh & Ors vs. Divesh Bhutani & Ors. is concerned we may only observe that the Hon'ble Apex Court in given facts and circumstances of the case has permitted the Appellant therein to carry our business of hosting marriages pending the decision in the said Appeal. In the facts and circumstances of the present case, therefore, we pass the following order: 1. Respondent no. 1-State of Haryana, respondent no. 3-Principal Chief Conservator of Forest, respondent no. 4-Haryana State Pollution Control Board and respondent no. 5- Municipal Corporation Faridabad are directed to initiate action against respondent no. 6-Satkar Restaurant and respondent no. 7- Pawan Singh for prohibiting non-forest activity in Khewat No.. 182 MIN, RICT No. 61, Kila No. 19 (8-0), 20/1 (0- 7), 22/2 (7-17) of village Ankhir, District Faridabad, Haryana in accordance with law. 2. Respondent nos. 6 and 7 are directed to restore the forest in the aforesaid land", the NGT had directed.