'We Will Clarify That The Definition Of 'Vulnerable Witness' May Not Be Constrained To 'Child Witnesses': Supreme Court 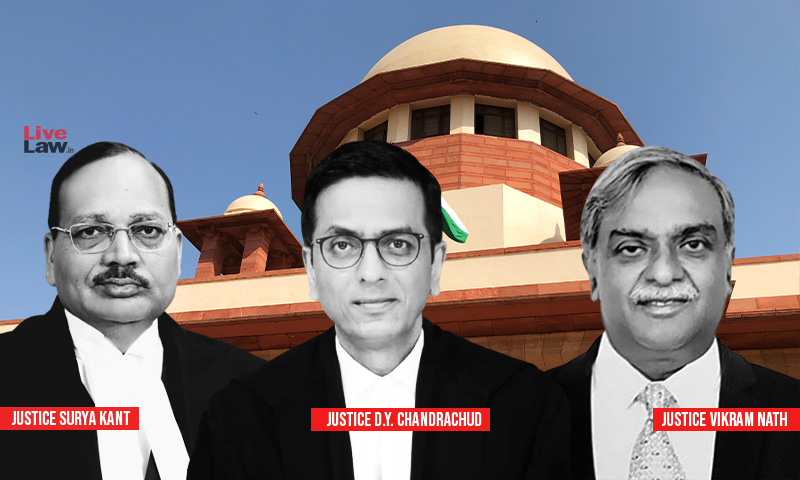 In connection with the establishment of vulnerable witness deposition courtrooms in every district, the Supreme Court on Wednesday orally remarked that it will clarify that the definition of 'vulnerable witness' may not be constrained to 'child witnesses'.The bench of Justices D. Y. Chandrachud, Surya Kant and Vikram Nath was hearing a Miscellaneous Application as to the wider issue on the...

In connection with the establishment of vulnerable witness deposition courtrooms in every district, the Supreme Court on Wednesday orally remarked that it will clarify that the definition of 'vulnerable witness' may not be constrained to 'child witnesses'.

The bench of Justices D. Y. Chandrachud, Surya Kant and Vikram Nath was hearing a Miscellaneous Application as to the wider issue on the need to set up vulnerable witness court rooms in compliance with the decision of the Supreme Court in State of Maharashtra v. Bandu. In 2019, notices were directed to be issued to all the High Courts through the Registrars of the respective High Courts, for status report with regard to the establishment of the vulnerable witness deposition court rooms in compliance of the directions of this Court in State of Maharashtra v. Bandu [(2018) 11 SCC 163]. In Bandu's case, the Court had dealt with the suggestion that there should be special centres for examination of vulnerable witnesses in criminal cases in the interest of conducive environment in Court so as to encourage a vulnerable victim to make a statement. "Such centres ought to be set up with all necessary safeguards. Our attention has been drawn to guidelines issued by the Delhi High Court for recording evidence of vulnerable witnesses in criminal matters and also the fact that four special centres have been set up at Delhi for the purpose. We find merit in the above suggestion", the Court had opined.
On Wednesday, Senior Advocate Vibha Dutta Makhija, Amicus Curiae in the matter, told the bench, "In the Delhi scheme, which was directed to be adopted by all High Courts, the definition of 'vulnerable witness' is restricted to a child witness. Please have a relook at the categorisation of a vulnerable witness. There are witnesses in corruption cases who may be uncomfortable in depositions, those in matters of section 377 IPC, those suffering from mental distress. The Delhi guidelines are snowballing into other High Courts also"
Justice Chandrachud observed, "You want some clarification from the court? We will say that it is not a constraining factor. Because the Delhi rules are not by way of a 142 direction that everybody should follow the same. It is upto the High Courts to adopt the appropriate definition."
Justice Vikram Nath also said, "Special courts were created in Gujarat for deposition, for all kinds of matters. Wherever the presiding officer would find that evidence should be recorded there, it was done. All districts in Gujarat have functional centers. Throughout 2020, we have established."
Next, Justice Chandrachud said, "Now it is a question of monitoring in each High Court. We can request the High Court to monitor the issue by itself, for the matter to be looked at by the Chief Justice or any other bench that the Chief Justice nominates...". At the previous hearing, the Court had observed that it may consider requesting the Chief Justices of High Courts to monitor compliance with its 2017 judgment in State of Maharashtra v. Bandu in this behalf.
At this, Ms. Makhija indicated the issue of finances between the state and the High Court because this also concerns infrastructure.
Justice Surya Kant noted, "That is the real problem. In Haryana, I was chairman of the building committee. It is better that the Chief Justices take up the matter with the state government to provide this additional infrastructure."
"Chief Justices of various High Courts can make an estimation and then Your Lordships can direct the state government to make available those funds within a particular period. The only difficulty faced by the high courts is that, other than in states which are flush with funds...like Delhi has more than the required number, Maharashtra has several, Gujarat is doing a lot of work, Punjab and Haryana is doing a lot of work, but the north-eastern states are not being able to...", submitted Ms. Makhija.
Justice Vikram Nath said, "There may be states which are not even able to pay salary to the staff every month. The crisis of funds may be everywhere. But they are under a constitutional obligation to provide these funds."
Justice Chandrachud remarked, "That order, we will pass."
The judge further noted the issue of the training requirement- "Justice Gita Mittal brought about the Delhi scheme, as part of the Delhi High Court. It was found that training is very important because without that, you cannot have separate court-rooms. Have a word with the learned judge and incorporate training requirements also as part of your suggestions. We will also find out about the issue of training. Then we can say what are the issues on training that we need to address. We will take up the matter next Thursday at 2 PM and dispose it off. When we are disposing off the matter, we will pass a comprehensive order and leave it to the High Courts. Since we are likely to leave control of the matter, this is something which we can incorporate in the form of a short guideline", Justice Chandrachud told Ms. Makhija.
The bench of Justices A. K. Goel and U. U. Lalit had noted that in Sakshi v. Union of India and Ors (2004) 5 SCC 518 this Court, after due consideration of the above issue, issued following directions:

"(1) The provisions of sub-section (2) of Section 327 Cr.PC shall, in addition to the offences mentioned in the sub-section, also apply in inquiry or trial of offences under Sections 354 and 377 IPC.
(2) In holding trial of child sex abuse or rape:
(i) a screen or some such arrangements may be made where the victim or witnesses (who may be equally vulnerable like the victim) do not see the body or face of the accused;
(ii) the questions put in cross-examination on behalf of the accused, insofar as they relate directly to the incident, should be given in writing to the presiding officer of the court who may put them to the victim or witnesses in a language which is clear and is not embarrassing;
(iii) the victim of child abuse or rape, while giving testimony in court, should be allowed sufficient breaks as and when required.
These directions are in addition to those given in State of Punjab v. Gurmit Singh"

"The directions of Delhi High Court and setting up of special centres for vulnerable witnesses as noted above are consistent with the decision of this Court and supplement the same. We are of the view that all High Courts can adopt such guidelines if the same have not yet been adopted with such modifications as may be deemed necessary. Setting up of one centre for vulnerable witnesses may be perhaps required almost in every district in the country. All the High Courts may take appropriate steps in this direction in due course in phases. At least two such centres in the jurisdiction of each High Court may be set up within three months from today. Thereafter, more such centres may be set up as per decision of the High Courts. A copy of this order be sent to all the High Courts for necessary action", the bench of Justices Goel and Lalit had directed.