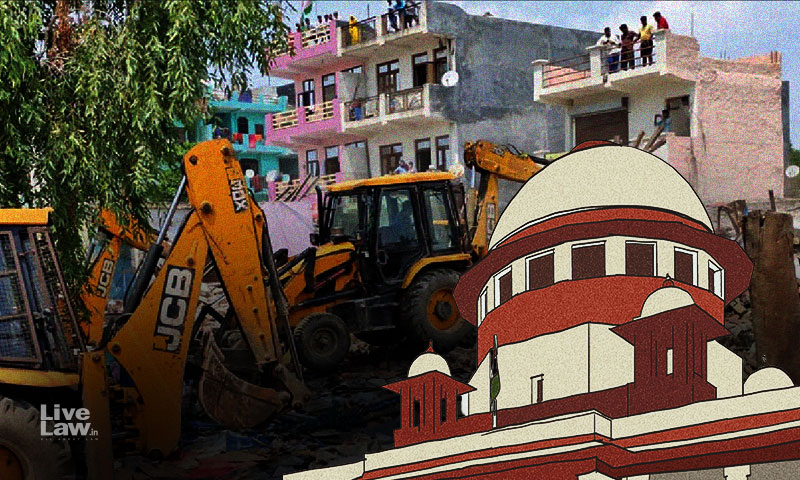 The Supreme Court on Thursday extended until further orders the status quo order against the demolition drive launched by the North Delhi Municipal Corporation(NDMC) in the riot-hit Jahangirpuri area.A bench comprising Justices L Nageswara Rao and BR Gavai issued notice to the NDMC in the petition filed by the Jamiat Ulama-i-Hind and sought its counter-affidavit within 2 weeks."We'll take...

The Supreme Court on Thursday extended until further orders the status quo order against the demolition drive launched by the North Delhi Municipal Corporation(NDMC) in the riot-hit Jahangirpuri area.

A bench comprising Justices L Nageswara Rao and BR Gavai issued notice to the NDMC in the petition filed by the Jamiat Ulama-i-Hind and sought its counter-affidavit within 2 weeks.

"We'll take serious view of demolition that took place after information was given to Mayor", the Bench observed during the hearing.

The Bench also issued notice to the Union of India and the States of Madhya Pradesh, Uttar Pradesh and Gujarat on another petition filed by Jamiat Ulama-i-Hind against the authorities in different states resorting to demolition of houses of persons accused in crimes.

The petitions will be listed again after two weeks.

Yesterday, a bench led the Chief Justice of India had ordered status quo on demolitions until further orders in Jahangirpuri after an urgent mention was made by Senior Advocate Dushyant Dave.

Today, Senior Advocate Dave submitted that it was a matter related to "national importance".

Justice Rao asked if it was a matter of "national importance" as it was only confined to an area in Delhi. Dave said that it has become a "State policy" now that after every riots, a particular section of the society is targeted using bulldozers. "How is it that bulldozers have become an instrument of state policy?", he asked.

"This is not an issue confined to Jahangirpuri. It is a matter affecting social fabric of our country.Particular section of society is being targeted. I'll read Dr Ambedkar and Sardar patel on this, how they spoke of this eventuality. This is the warning they gave. If this is allowed, there will be no rule of law left. How is it that the President of the BJP writes a letter to the Municipal Commissioner to start demolitions and they demolish after that? The Municipal Corporation Act provides for service of notice, appeals..Look at the Olga Tellis case, where the Supreme Court protected.."

Dave pointed out there is a legislation in Delhi which regularised colonies. "There are 731 unauthorised colonies in Delhi with lakhs of people and you pick up one colony because you target 1 community!".

Dave referred to Section 343 of the Delhi Municipal Corporation Act to say that no order of demolition can be passed without giving a reasonable opportunity of hearing to the person.

"They have demolished homes. Who should be held accountable? These are poor people. If you want to act against unauthorized constructions, you go to Sainik Farms.  Go to Golf Links where every second home is an encroachment. You don't want to touch them, but target the poor people", Dave submitted.

"The police and civil authorities are bound by the Constitution and not by letters written by a BJP leader. His wish became the command. It speaks on a sad commentary on us as a nation", Dave added.

Muslims are associated with encroachments : Sibal

Senior Advocate Kapil Sibal, appearing in the second petition filed by Jamiat Ulama-i-Hind against the demolition of homes of accused in other states, made submissions after Dave.

"Encroachment is a serious problem all over India but the issue is Muslims are being associated with encroachments", Sibal submitted.

"Some isolated instances. When processions are carried out and frictions occur, homes of only one community is bulldozed...", Sibal submitted.

"Look at Madhya pradesh...where the Minister says that if Muslims does such a thing they cannot expect justice. Who decides that ?Who gave him that power?", Sibal added.

"I've photos where people from a community were gated and their houses were demolished. What is this process, to instil fear to sideline rule of law?", Sibal said.

Sibal requested that an order be passed to restrain demolitions in this manner till the matter is heard. The bench said that it cannot pass a blanket order against demolitions on a pan-India basis.

Senior Advocate PV Surendranath, appearing for Brinda Karat, submitted that she had reached Block C of Jahangirpuri at around 10.45AM and told the authorities about the Supreme Court's order.  But the demolitions continued till 12.25 PM.

"She had to physically stand infront of the bulldozers to stop...had she not been there the entire C block would have got demolished", Surendranath submitted.

The Bench asked when exactly was the order communicated. Sibal submitted that the Advocate-on-Record MR Shamshad messaged the order via Whatsapp to the Mayor around 11.

"The Mayor himself went on record at 11 to say SC's orders will be complied with. He complied with it after 12 depsite that", Dave submitted.

Notices were given, no targeting of Muslims : Solicitor General's response

Solicitor General of India Tushar Mehta, appearing for the North Delhi Municipal Corporation, submitted that the eviction drive started way back in January.

"So far as Delhi is concerned... they tried to remove what was lying on footpath and public roads, it started in January, then February 2022 and then in April. It was commenced to clear roads...", the SG said. He said that in many cases, there are judicial orders to remove encroachments in footpaths and public roads. Notices were given to persons.

"This happens when organizations file writ petitions..none of the affected persons are here, because they will have to show their locus", the SG said.

"No individual is coming as they'll have to show notices & suddenly organisations have come", the SG added.

"There is a pattern that one particular section will move PIL on an issue in SC. Thereafter entire political spectrum joins the bandwagon", he said.

The SG also disputed that claim that only properties of Muslims were acted against.

"In Khargone demolition, 88 affected parties were Hindus and 26 were Muslims. I am sorry to make this bifurcation, the Government does not want to. But I am compelled by the petitioners to do so", the SG said. He said that in Madhya Pradesh, notices were served to parties in 2021 and 2022.

The SG submitted that there is no provision for notice to remove stalls, chairs etc from footpaths and roads.

"The demolition yesterday was only of stalls chairs tables etc?", Justice Rao asked.

"Are bulldozers required to remove stalls, chairs and all?", Justice Gavai asked.

"Notices were issued for buildings", the SG said.

"If the statute provides for something to be done in a certain way, it has be done in that way. It also provides for appellate remedy, it provides time for 5-15 days", Justice Gavai pointed out.

The SG maintained that for buildings, notices were issued.

Senior Advocate Hegde, appearing for Ganesh Gupta, whose juice shop at Jahangirpuri was destroyed, asserted that no notice was issued.

"We want affidavits from the petitioners on the notices if served and counter affidavits on the details of the demolition and till then status quo order will continue", Justice Rao said.

The SG also said that it was wrong on the part of Dave to say that the demolitions started at 9AM instead of 2 PM as stated in the notice as the authorities knew that the petition was going to be mentioned in the Court. The SG said that the notice for yesterday mentioned 9 AM and 2 PM was for the day before yesterday.

"We'll take serious view of demolition that took place after information was given to Mayor", Justice Rao said at this juncture.

The hearing got over at this point with the bench issuing notice and posting the matter after two weeks. The bench clarified that the status quo was with respect to the Jahangirpuri demolitions.

"Issue notice in writ petitions. Status quo to be maintained till further orders. List after 2 weeks. Pleadings to be completed till then", the Bench said.

After the bench dictated the order, Sibal made a second request for stay on demolitions in the second petition. "This shouldn't mean in other states bulldozing happens", Sibal submitted.

"You're bringing to our notice what happened some time back and your apprehension is what will happen. Once we have passed orders in one case, you still think something will happen?", Justice Rao asked.