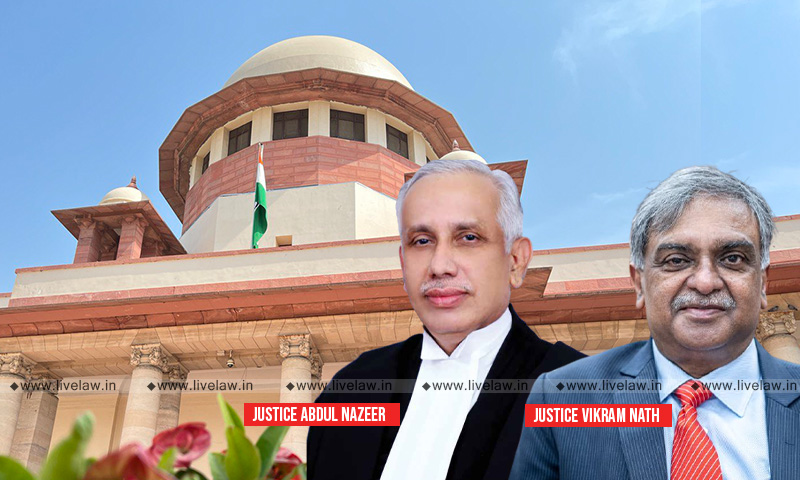 The Supreme Court dismissed the challenge against cancelation of the declaration of Fair Price Shop vacancies in view of the implementation of National Food Security Act, 2013.

By recalling the vacancy notification, the State endeavored to enforce the statute and that there can be no estoppel against a statute, the bench comprising Justices S. Abdul Nazeer and Vikram Nath observed.

A Gazette Notification dated 30.01.2014, the vacancy for FPS dealership was declared in the District of Alipurduar. The respondent participated in the selection process and was recommended as a first priority candidate in respect of the said vacancy. However, no final order appointing the respondent was issued by the State Authority. While the application of the respondent was pending, a notification dated 17.08.2015 was issued by the Food and Supplies Department of the State of West Bengal cancelling the declaration of vacancies. This notification was issued in the light of implementation of the 2013 Act. The respondent filed a writ petition before the High Court of Calcutta inter alia praying for quashing of the Notification dated 17.08.2015. The High Court single bench dismissed the writ petition. Allowing the intra court appeal, the Division bench of the High Court held that the State of West Bengal failed to justify the decision to recall the vacancies and that it has acted in an arbitrary and unreasonable manner, and hence, quashed the Notification dated 17.08.2015.

Before the Apex Court, the State contended that it was reposed with a responsibility for implementing the 2013 Act which, inter alia, entrusted a responsibility to reform the existing Targeted Distribution System. The respondent in an unfinalized selection process has no vested right in his favour to seek continuation of the notified vacancies. Hence, by recalling the vacancy notification, the State endeavored to enforce the statute and that there can be no estoppel against a statute, it was contended.

Agreeing with these contentions, the bench observed thus while allowing the appeal:

"The respondent herein being a mere applicant in an un­finalised selection process, has no vested right in his favour to seek continuation of the notified vacancies, when by recalling the vacancy notification, the appellants endeavored to enforce the statute. Moreover, as discussed above, there can be no estoppel against a statute. Even going by the observations of the Division Bench in the impugned judgment, that the State was aware of the 2013 Act while issuing the 30.01.2014 vacancy notification, the said notification cannot be sustained, being contrary to the mandate of the National Food Security Act, 2013, more importantly of Section 12 thereof."

Estoppel - There can be no estoppel against a statute - Plea of promissory estoppel would stand negated when the mandate of a statute is followed. (Para 25-29)

National Food Security Act, 2013 - There is a paradigm shift in addressing the problem of food security from the current welfare approach to a right based approach. The Act confers legal right on the eligible beneficiaries to get the essential commodities through fair price shops at a highly subsidized price. The Act also envisages reforms necessary for distribution of essential commodities to the ration card holders - The Act is a social welfare legislation and its provisions are mandatory. (Para 15-20)

Summary: Supreme Court upheld cancelation of the declaration of Fair Price Shop vacancies by State of West Bengal in view of the implementation of National Food Security Act.