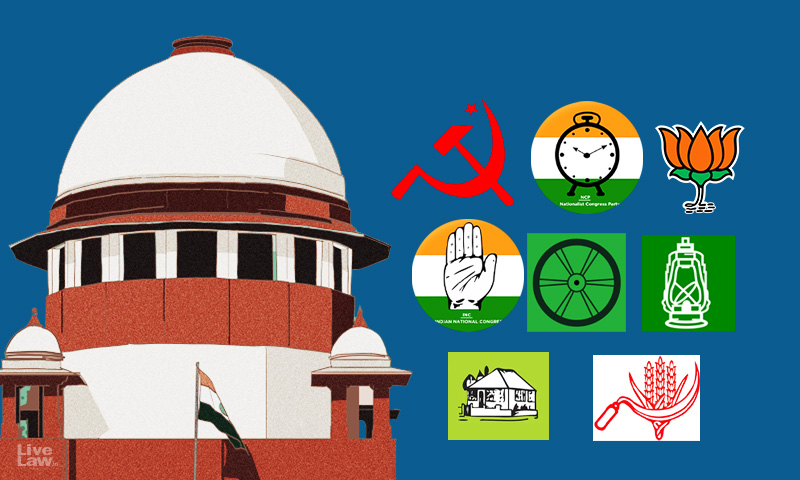 The Supreme Court imposed fine on eight political parties for committing contempt of court by flouting the directions in its February 2020 judgment for publication of the criminal antecedents of candidates during the Bihar assembly polls last year.Rupees Five Lakhs each have been imposed as fine on Communist Party of India( Marxist) and Nationalist Congress Party. Bharatiya Janata Party,...

The Supreme Court imposed fine on eight political parties for committing contempt of court by flouting the directions in its February 2020 judgment for publication of the criminal antecedents of candidates during the Bihar assembly polls last year.

The court observed that CPI(M) and NCP have not at all complied with the directions issued by it in January 2020.

The following directions were issued by the Court in its order passed in February last year:

The contempt petition was filed alleging that these directives were flouted by political parties during elections that were held to the Bihar Legislative Assembly in October/November, 2020.

The court noted that CPI(M) and NCP are the two parties who has not submitted the Form C7 or C8 for any of its candidates and therefore is fully non-compliant.

Senior Advocate P.V. Surendranath, appearing on behalf of CPI(M) submitted that the election process for the State of Bihar was coordinated by the State Committee of the party and that Form C7 and C8 were not submitted due to oversight on part of the State Committee. He further submitted that the party has attempted to comply with the directions insofar as declaration of information regarding criminal cases in newspapers and the website of the party is concerned and that the aforementioned act of non-compliance should be viewed as an isolated incident and its unconditional apology be accepted.

However, the Court rejected this argument by saying :

"..we are of the view an oversight on part of the State Committee of the party cannot be a ground for non-compliance of the directions passed by this Court. This being the case, the Respondent No. 8 is in contempt of the Order dated 13.02.2020".

As regards NCP, Senior Advocates Kapil Sibal and Ritin Rai submitted due to the dissolution of the state committee of the party in July 2020, the directions could not be complied with. The Court refused to accept this argument

The other parties were found to be in partial non-compliance.

BSP was let off by the Court with a warning, after accepting its explanation.

Also read other reports about the judgment :

Political Parties Have To Publish Information On 'Candidates With Criminal Antecedents' On Their Website Homepage: Supreme Court

Politicians With Criminal Antecedents Cannot Be Permitted To Be Law-Makers; But Our Hands Are Tied: Supreme Court