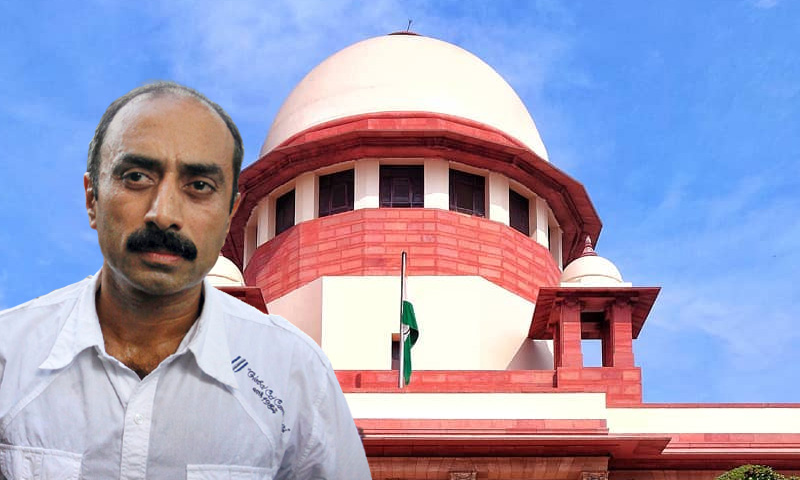 The Supreme Court on Wednesday dismissed as withdrawn former IPS officer Sanjiv Bhatt's plea seeking suspension of sentence in the 1990 custodial death case in view of the Gujarat High Court now hearing his appeal against the conviction.When the matter was taken today, Senior Advocate Kapil Sibal, appearing for Bhatt, submitted that the petition is being withdrawn as the Gujarat High Court...

The Supreme Court on Wednesday dismissed as withdrawn former IPS officer Sanjiv Bhatt's plea seeking suspension of sentence in the 1990 custodial death case in view of the Gujarat High Court now hearing his appeal against the conviction.

When the matter was taken today, Senior Advocate Kapil Sibal, appearing for Bhatt, submitted that the petition is being withdrawn as the Gujarat High Court is hearing the appeal on a day to day basis. Sibal requested that the Court be asked to decide the appeal without being influenced by the observations made in the earlier order refusing to suspend the sentence.

The bench of Justices M. R. Shah and B. V. Nagarathna dismissed the Special Leave Petition as withdrawn. The bench observed in the order that it is needless to say that the appeal shall be decided in accordance with law on merits and that the observations made while considering sentence suspension cannot inluence the appeal.

The bench was hearing Bhatt's 2020 SLP against the September, 2019 decision of the Division Bench of the Gujarat High Court refusing to suspend his sentence.

Bhatt was directed to undergo life-imprisonment by a Sessions Court in Jamnagar in June 2019 in the custodial death of Jamjodhpur resident Prabhudas Vaishnani in November 1990. The officer, who had filed an affidavit in the Supreme Court in 2011 accusing the then Chief Minister Narendra Modi of complicity in the 2002 riots, is currently lodged at Palanpur jail. The SLP filed before the Supreme Court challenged the refusal of the Gujarat High Court to suspend his sentence.

In October 2019, the Gujarat High Court had refused to suspend his sentence observing he had had scant respect for courts and had deliberately tried to mislead the courts.

"..it appears that the applicant has scant respect for the Courts and is in the habit of misusing the process of law and scandalizing the Court," a division bench of Justices Bela M Trivedi and AC Rao of the High Court had observed.

Earlier, Justice V B Mayani, who sat on a division bench with Justice Harsha Devani, had recused saying "not before me" when the bail application of Bhatt and Pravinsinh Zala, another convict, came up.

In the petition filed in the Apex Court, Bhat has argued that the High Court had failed to appreciate the fact that the state government started prosecuting him only after 2011 when he came out against Narendra Modi. Till then, the stand of the State had been that there was no case against Bhatt, the plea stated.

Following his death, an FIR was registered against Bhatt and few other officers for custodial torture and the Magistrate took cognizance of the case iin 1995. However, the trial remained till 2011 due to stay by the Gujarat High Court.

Later, the stay was vacated and trial commenced. Bhatt has contended that the High Court failed to see that the alleged custodial death happened many days after the release of the prisoner from police custody on November 18, 1990.

The IPS officer, who was sacked in 2015, approached the Top Court alleging that although nearly 300 witnesses were listed by the prosecution, only 32 were actually examined in trial, leaving out many crucial witnesses.

Three policemen who were part of the team which investigated the offence, and a few other witnesses who denied any incident of custodial violence were not examined by the prosecution, stated Bhatt. He argued that the case against him was a part of "political vendetta".

In April 2011, Bhatt had filed an affidavit in the Supreme Court accusing the then Chief Minister Narendra Modi of complicity in the 2002 riots. He claimed to have attended a meeting convened by the then CM, Mr. Modi, on February 27, 2002, the day of the communal riots, when instructions were allegedly given to the State Police to not take any action against the perpetrators of violence.

The Court appointed SIT however gave clean chit to Modi. In 2015, Bhatt was removed from the police service, on the ground of "unauthorised absence".

In October 2015, the Supreme Court dismissed Bhatt's plea for constituting a special investigation team (SIT) for cases filed against him by Gujarat Government.