"Why Is The State Of Goa Backing Large Entities In Renewal Of Lease Without Following Due Process?' SC Dismisses Vedanta's Plea For Validating Its Mining Lease Till 2037 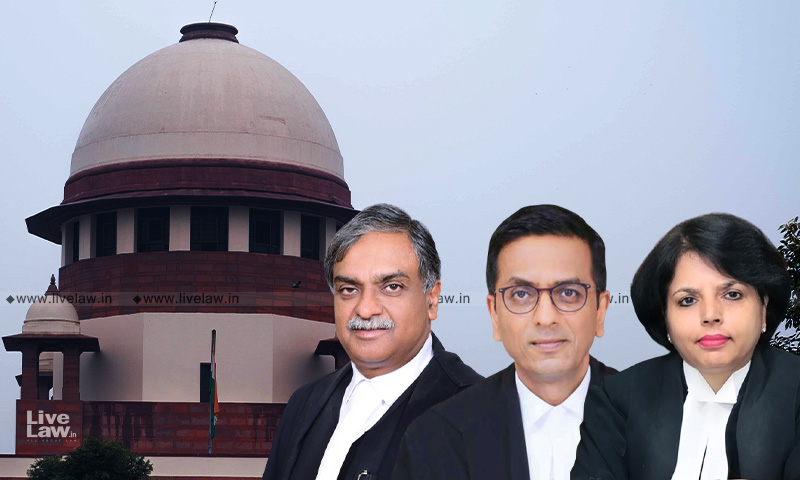 x
"If the state wants to maximise revenue, why is the due process of law not being followed? Why is the state backing these large entities in the renewal of their leases?", the court asked Solicitor General Tushar Mehta.

The Supreme Court on Tuesday told SG Tushar Mehta to advise the Goa government to follow competitive bidding in handing out mining leases to maximise revenue, instead of backing the renewal of leases of large private mining leaseholders whose "rapacious and rampant exploitation" of Goa's fragile ecology for profit has been deprecated by the Court.The bench of Justices D. Y. Chandrachud,...

The Supreme Court on Tuesday told SG Tushar Mehta to advise the Goa government to follow competitive bidding in handing out mining leases to maximise revenue, instead of backing the renewal of leases of large private mining leaseholders whose "rapacious and rampant exploitation" of Goa's fragile ecology for profit has been deprecated by the Court.

The bench of Justices D. Y. Chandrachud, Vikram Nath and Hima Kohli was hearing Vedanta's SLP against the November 2019 decision of the Bombay High Court dismissing its writ petition demanding a declaration that its mining lease, as per the provisions of the amended MMDR Act 2015, was valid for 50 years, until 2037.
Another writ petition under Article 32 by another mining leaseholder, urging the same ground, was also listed before the bench. While the bench dismissed Vedanta's SLP, the bench allowed the withdrawal of the writ petition when Senior Advocate A. M. Singhvi, for the writ petitioner Geetabala M. N. Parulekar, wished to move the High Court instead.
"You will support them before the High Court also", said Justice Chandrachud to the SG, who appeared for the Goa government.
"I support the development of the state", replied the SG.

"Our judgment in Goa Foundation II left it open for you to hold competitive bidding. If the state follows the transparent procedure, it will ensure the best revenue and the best realisation in the interest of the state. If the state wants to maximise revenue, why is the due process of law not being followed? Why is the state backing these large entities in the renewal of their leases? The impression that is being given off is that the government wants the renewal of their leases. Please advise the government properly", observed Justice Chandrachud.

It may be noted that the bench of Justices Madan B. Lokur and Deepak Gupta, in their February 7, 2018 judgment in Goa Foundation II, cancelled 88 mining leases, which were renewed by the government in Goa in 2015 to "benefit private mining leaseholders". The judgment had traced the "rapacious and rampant exploitation" of Goa's fragile ecology by private mining leaseholders, whose sole motive was to make profits, for years. The verdict had noted how these leases were hastily renewed by the state in 2014 with retrospective effect from 2007, just in the nick of time before an amended Mines and Minerals (Development and Regulation) Act made auction of leases mandatory to mine notified minerals like iron ore.
In April 2014, in the Goa Foundation I case, the Court found that rampant mining was going on in the state despite all the iron ore and manganese ore leases having expired way back in November 2007. The Court ruled all mining activity post-2007 illegal in the state and required the same to stop immediately. It said that only fresh mining leases can be granted henceforth.
Vedanta's SLP
Before the Supreme Court on Tuesday, Vedanta was represented by Senior Advocate Krishnan Venugopal.
It was the case of the SLP petitioner that their leases were previously granted by the erstwhile Portuguese regime in Goa, as mining concessions, which came to be abolished and declared as mining leases in the year 1987 by virtue of the Goa, Daman And Diu Mining Concessions (Abolition And Declaration As Mining Leases) Act, 1987 (the "Abolition Act"). The Abolition Act, which came into force on 23.05.1987, granted deemed mining leases to inter alia the Petitioner, which would end on 22.11.1987 vide Sec. 5(1) of the Abolition Act. The Abolition Act thereafter provided for a renewal under the MMDR Act, which was to end on 22.11.2007, vide Sec. 5(2) of the Abolition Act. The Petitioner, having applied for and obtained the said renewal, got its first grant of a lease under the MMDR Act in 1987.
Further, it was advanced that Section 8A(3) of the MMDR Act which has now been inserted, has, by means of a deeming fiction, provided that all leases, whenever granted, shall be deemed to have been granted for a period of 50 years. "It must follow as a matter of law that the deemed mining leases of the Petitioner No. 1 under the MMDR Act are deemed to be for 50 years, i.e. from 1987 to 2037", it was submitted.
It was pointed out that the Ministry of Mines of the Union of India had, after the coming into force of the MMDR Amendment Act 2015, written to all States to amend the lease deeds in their respective States on the basis of Sec. 8A of MMDR Act, and that the Supreme Court has held in Common Cause v. Union of India (2016) 11 SCC 455 that the mere expiry of the period of renewal of a lease before the coming into force of Sec. 8A of the MMDR Act, will not disentitle the leaseholder to the benefits of Sec. 8A, including Secs. 8A (3) and (6) of the MMDR Act. It was submitted that the Petitioner had made a detailed representation to the State of Goa on 29.10.2019, on the basis of Sec. 8A of the MMDR Act, as interpreted in Common Cause (supra), but the same has been rejected by the State by the communication dated 19.11.2019, while acknowledging that it was prima facie in agreement with the said contention, on the premise that it was precluded from doing so in view of the directions contained in Goa Foundation II.

"The Petitioners, therefore, filed a writ petition before the Hon'ble High Court seeking quashing and setting aside of the communication dated 19.11.2019 and for a direction to the State of Goa to amend the lease deeds of the Petitioner with an end date in 2037, in terms of the aforesaid communication and the decision of this Hon'ble Court in the case of common cause (supra), The Hon'ble High Court has dismissed the said petition in view of the judgment of this Hon'ble Court in Goa Foundation II. It is the Petitioners' case that the Goa Foundation II judgment only held that the renewal period of the deemed mining leases in Goa ended on 22.11.2007, and that they were disentitled to a second renewal under section 8(3) of the MMDR Act, as it stood prior to the MMDR Amendment Act, 2015.

The renewal of the leases was granted before section 8A of the MMDR Act came into being, and one of the grounds on which the Supreme Court set aside the grant of renewals was the finding that the manner in which the renewal had been granted showed that they had been granted arbitrarily. The question whether by virtue of the operation of law, particularly the interplay of section 8A of the MMDR Act with the Abolition Act, the tenure of the existing deemed leases of 1987 was extended until 2037 was neither raised nor decided, since it did not arise for consideration", it was urged.

It may be noted that disapproving The practice of delayed filing of review petitions after waiting for judges to retire, the bench of Justices Chandrachud and M. R. Shah in July this year dismissed review petitions of Vedanta and the state of Goa against the judgment in Goa Foundation II.
On Tuesday, it was Mr. Venugopal's argument that the judgment in Goa Foundation II was per incuriam in view of the statutory amendment, and that it is settled that he could raise the said ground even in collateral proceedings.
At this, Justice Chandrachud noted,

"You cannot have different strategies like this- that you seek review here on some grounds and file a different writ petition before the High Court, followed by an SLP, for other issues. Once the judgment of our court resolved the controversy, all grounds ought to have been raised at one place. If not, you are concluded now. You cannot have two bites in the cherry. This is an abuse of the process of the law. It cannot be open to you to come again. You had argued the review here; you cannot bite the cherry here and there."

The bench then dismissed the SLP.
Article 32 Petition
"We don't want mining leaseholders to come here under 32! This court is not meant for them! Why should we open 32 jurisdiction to these kinds of matters?", Justice Chandrachud told Dr. Singhvi at the outset.
Dr. Singhvi, after a brief submission, sought permission to withdraw the SLP to move the High Court.
Advocate Prashant Bhushan, for the respondent, argued that this writ petition was a gross abuse of the process of the court:

"Their client was a party to Goa Foundation I also, where it was held that the leases granted in 1987 had long expired and even the 20 years extension was over in 2007 and that all mining activity 2007 onwards was illegal and should be stopped immediately! Your lordships had said that now only fresh mining leases can be given! Then the Goa government hurriedly renewed their leases. We challenged the same in Goa Foundation II, saying that only fresh leases could have been given! They could have raised this issue of 50 years extension in Goa Foundation II, but they did not do so! In the review petition also, it was not raised. After Your Lordships dismissed the Vedanta matter, they saw the writing on the wall and are now saying that they want to withdraw and move the High Court! But any hint from Your Lordships now with regard to approaching the High Court would be (unclear)!"

"Vedanta had come under Article 136. The petitioner here has had no such opportunity. We are only allowing the withdrawal because they say they want to take recourse to other proceedings. No liberty to this effect is being granted. Also, we are expressing no opinion on merits or on maintainability. We will say that all contentions and objections are left open", Justice Chandrachud explained.
"We are thinking from the infrastructural point also, why should this Court unnecessarily apply its mind to this matter all over again? The High Courts are robust institutions and are capable of interpreting the judgment in Goa Foundation", added the judge.
Case Titles: Vedanta Limited V. Director Of Mines And Geology; Geetabala M. N. Parulekar V. Director Of Mines And Geology
Click Here To Read/ Download Order
Next Story
Similar Posts
+ View more
Webinars
+ More
Law Firms
+ More
Latest News
+ More
लाइव लॉ हिंदी
+ More
International
+ More
Environment
+ More