BREAKING| Supreme Court Grants Bail To Perarivalan, Rajiv Gandhi Assassination Case Convict, Who Has Been In Jail For 32 Years 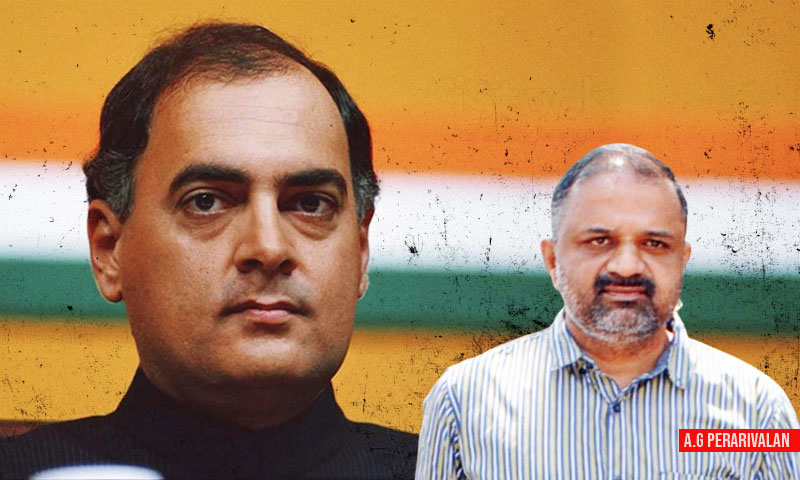 The Supreme Court on Wednesday granted bail to AG Perarivalan, one of the seven convicts serving life sentence in the case related to the assassination of former Prime Minister Rajiv Gandhi in 1991.Taking note of the fact that Perarivalan has been in jail for nearly 32 years, a bench comprising Justice L Nageswara Rao and Justice BR Gavai granted bail to him."Taking into account the fact that...

The Supreme Court on Wednesday granted bail to AG Perarivalan, one of the seven convicts serving life sentence in the case related to the assassination of former Prime Minister Rajiv Gandhi in 1991.

Taking note of the fact that Perarivalan has been in jail for nearly 32 years, a bench comprising Justice L Nageswara Rao and Justice BR Gavai granted bail to him.

"Taking into account the fact that the applicant has spent over 30 years in prison, we are of the considered view that he is entitled to be released on bail, inspite of the vehement opposition by the Centre", the bench noted in the interim order .

The bench passed the order in a special leave petition filed by Perarivalan in 2016 against the refusal of the Madras High Court to entertain his plea seeking commutation of sentence. The petition is kept pending to decide the larger issue relating to the appropriate authority to decide the matter of remission - Governor or President.

The bench noted that Perarivalan is on parole at present and he has been granted parole earlier thrice. It further noted that there are sufficient materials produced to show the acquisition of educational qualifications and skill set by him during the incarceration and his ill-health.

The bench said that the bail will be subject to the satisfaction of the trial court's conditions. Also, the petitioner has to report to the local police at Jolarpettai (his native place) during the first week of every month.

In 2014, the Supreme Court had commuted the death penalty to Perarivalan and two others to life imprisonment on account of long pendency of his mercy plea.

Additional Solicitor General KM Nataraj, appearing for the Centre, opposed the grant of bail to Perarivalan. The ASG submitted that he has already availed the benefit of mercy petition once, and his death penalty was commuted to life sentence by the Supreme Court in 2014 in view of the delay in considering the mercy petition.

The ASG further submitted that the next issue in the case was who was the appropriate authority to consider the request for remission. The application has been submitted before the Governor who in turn has said that the competent authority to decide it is the President. He referred to the 2015 Constitution Bench decision of the Supreme Court in Sriharan case to argue that the "appropriate authority" as per Section 432(7) CrPC to decide the pardon is the Central Government. He submitted that in this case the offence is under a law relating to matter in which the executive power of the Central Government extends.

When the bench asked what the "law" in this context was, the ASG replied that the petitioner has been convicted under the Indian Penal Code, Arms Act and the Foreigners Act though he has been acquitted under the TADA. He further pointed out that the investigating agency was the CBI.

The bench observed that these issues can be decided but in the meanwhile the petitioner can be granted bail, having regard to the fact that he has been in jail for 32 years.

Senior Advocate Rakesh Dwivedi, appearing for the Tamil Nadu Government, submitted that unless it is shown that the executive power of the Union extends over Section 302 IPC, the power of the State Government cannot be ousted.

"The offence under Section 302 relates to public order and thus comes under the state govt. It is the executive power of the state govt alone which applies in absence of a specific provision", Dwivedi submitted after referring to Justice Khalifulla's judgment in the Sirharan case.

"We will hear all this. But in the meanwhile we will give him bail?", Justice Rao observed.

Senior Advocate Gopal Shankaranarayanan, appearing for Perarivalan, submitted that the "larger issue" raised by the Centre is only a bogey. He submitted that in many other cases of Section 302 IPC, the Governor has exercised the power of remission.

He pointed out that the mercy petition was submitted in December 2015 before the Governor, and this aspect was noted by the Constitution Bench. He added that in September 2018, the State Government made a recommendation to the Governor to tender pardon to Perarivalan. However, the Governor kept the matter pending. When the petitioner approached the Supreme Court, the Centre first took the stance that pardon cannot be considered when the Multi Disciplinary Monitoring Authority (MDMA) is probing the "larger conspiracy" angle behind the assassination of Rajiv Gandhi. The senior counsel further submitted that later, the Solicitor General submitted that the Governor will take a decision. However, again a change in stance happened when the Governor said that the President is the competent authority, added Shankaranarayanan.

Shankaranarayanan further submitted that Perarivalan has been granted parole on three times and there has been no case of misconduct. Also, during the sentence period, his conduct was good and he has acquired educational qualifications and rendered assistance in the library in jail.

Dwivedi pointed out that in the case relating to the assassination of Mahatma Gandhi, one of the convicts, Gopal Godse, was released after 14 years after remitting his life sentence. In this case, the petitioner has spent 32 years in jail, Dwivedi pointed out.

Earlier Developments in the case

The Centre on February 4, 2021 had informed the Supreme Court that the Tamil Nadu Governor has proposed that the President of India was the competent authority to deal the request of remission of sentence in case of AG Perarivalan, the convict in the Rajiv Gandhi assassination case.

The Ministry of Home Affairs had submitted an affidavit stating that the Tamil Nadu Governor, after considering facts and circumstances of the case, recorded that the President would be the competent authority and the Central Government will process the proposal in accordance with the law.

On 22nd January 2021, the Top Court had asked the Governor to decide the petitioner's application for remission. The order was passed after SG Tushar Mehta had informed the Supreme Court that the Tamil Nadu Governor will decide, "as per the Constitution", on the remission of the sentence in exercise of his discretionary power under Article 161 within the next 3-4 days.

The bench had earlier expressed unhappiness over the fact that the recommendation made by the Tamil Nadu state government for the remission of the sentence had been pending before the Governor for over two years.