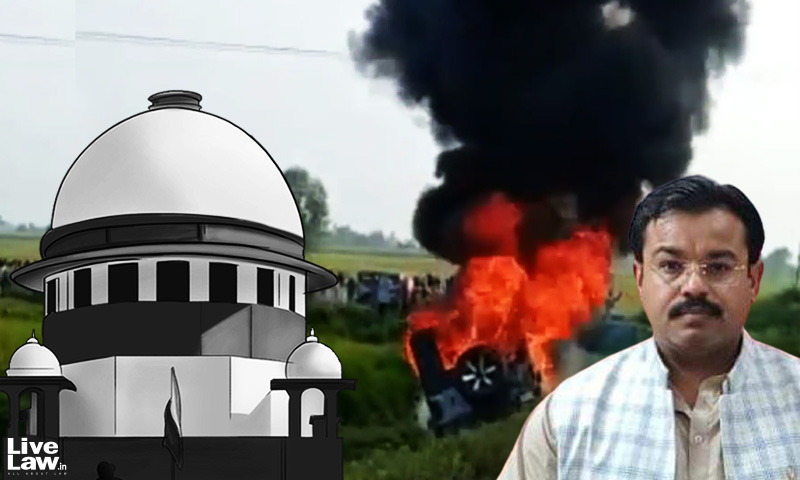 The Supreme Court on Wednesday granted interim bail for a period of eight weeks to Ashish Mishra, son of Union Minister Ajay Mishra, in the Lakhimpur Kheri violence case related to the killings of five persons in October 2021, when vehicles of his convoy allegedly ran over a group of farmers who were protesting against the farm laws.

The Court directed Mishra to leave the State of Uttar Pradesh within one week of availing interim bail and directed him not to stay either in the State of UP or the NCT of Delhi during the period of interim bail. He has to surrender his passport before the trial court and can enter the State of UP only to attend the trial court proceedings. Any attempt by Mishra, his family members or supporters to influence or intimidate directly or indirectly witness will lead to cancellation of bail.

He has to attend the trial court proceedings regularly and cannot seek any adjournment. If it is found that Mishra is trying to delay the trial it will be a valid ground to cancel his bail.

Significantly, the bench also granted interim bail to four persons who are accused in the counter-case (registered against the farmers), invoking its suo-motu powers. They are directed to be released on interim bail until further orders, subject to furnishing bail bonds to the trial court.

A bench comprising Justices Surya Kant and JK Maheshwari, decided to keep the regular bail application filed by Mishra pending, and granted him interim bail to adjudge the impact of his release on trial. The petition will be posted next on March 14 for directions after the trial court sends a report on the status of the witnesses being examined.

Taking note of the concerns raised about the free and fair trial, the bench noted that a balancing approach was necessary to balance the right to personal liberty and ensure the fair trail.

The bench had reserved orders in the case on January 19, after hearing Senior Advocate Mukul Rohatgi for Mishra, Additional Advocate General of UP Garima Prashad and Senior Advocate Dushyant Dave for the relatives of the victims of the crime.

Raising a plea of alibi, Rohatgi argued that there are mobile tower location records which show that Mishra was elsewhere when the crime took place. Terming the incident a "fracas", the senior lawyer contended that the deaths took place when the driver lost control of the vehicle after the farmers attacked it.

The State of UP opposed the bail application by saying that the crime was "grave and heinous".

On behalf of the victims, Dushyant Dave vehemently opposed the grant of bail. He said that the consistent practice of the Supreme Court has been to refuse interference when bail has been concurrently rejected by the trial court and the High Court in a serious offence of Section 302 IPC. Will the Supreme Court lay down a uniform law that every murder accused will be entitled to bail after one year of custody, he asked. Refuting Rohatgi's argument that it was a sudden fracas, Dave contended that the crime was premeditated, as there was a previous statement by Mishra's father threatening the protesters. He highlighted that the investigation in the case came on the right track only after the Supreme Court constituted a Special Investigation Team.

Initially, the Allahabad High Court had granted bail to Mishra on February 10, 2022, but it was set aside by the Supreme Court bench comprising the then CJI NV Ramana, Justice Surya Kant and Justice Hima Kohli in April 2022 after noting that the High Court took into account irrelevant considerations and ignored relevant factors. The bail application was then remanded to the High Court. The Supreme Court's order came in appeal filed by the relatives of the farmers who got killed in the crime.

On July 26, the High Court dismissed the bail application after re-hearing the matter, following the remand by the Supreme Court.