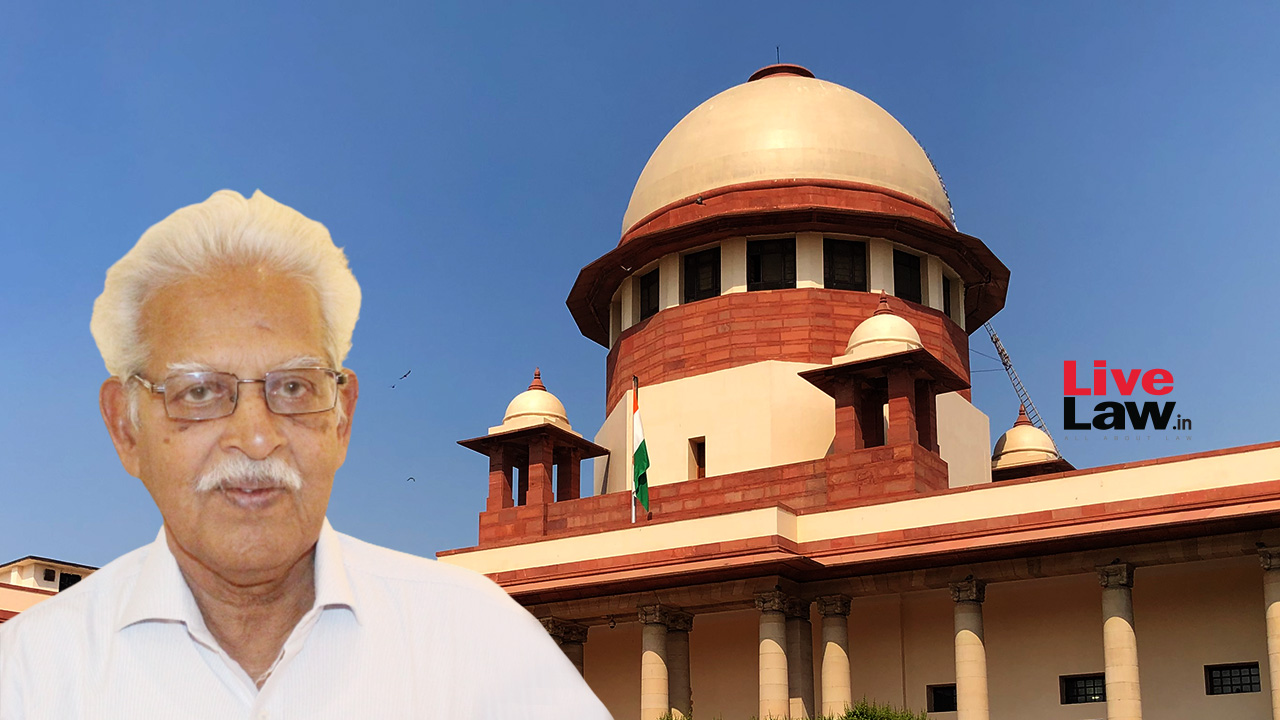 The Supreme Court on Wednesday granted bail on medical grounds to 82-year old P Varavara Rao, who has been booked under the Unlawful Activities Prevention Act in the Bhima Koregaon case for alleged links with banned Maoist organization.

The bench took into account Rao's age, his medical conditions and also the two and half year period of actual custody spent by him. The bench also noted that trial is yet to begin in the case and even charges have not been framed although chargesheet has been filed.

"The medical condition of the appellant has not improved to such an extent over a period of time that the facility of bail which was granted earlier be withdrawn. Considering the totality of circumstances, the appellant is entitled to bail on medical grounds", the bench said while deleting the condition imposed by the Bombay High Court that he should surrender after 3 months.

The bench further ordered that Rao should not leave the area of Greater Mumbai without express permission from the Special NIA Court at Mumbai and that he shall not in anyway misuse his liberty nor shall he get in touch with any of the witnesses or try to influence the course of investigation. And the appellant shall be entitled to medical attention of his choice, but shall keep the NIA authorities in touch with any such developments, including the medical attention received by him.

The bench clarified that the bail has been granted solely on medical grounds and shall not be taken as a reflection on the merits of the matter. The order shall not be a precedent for the cases of other accused or the appellant himself on merits.

Rao was arrested in the case four years ago on August 28, 2018. He was taken to Taloja jail in Mumbai in November 2018. In 2020, he was shifted to hospital when his medical conditions got aggravated. In February 2021, he was allowed 6-months medical bail by the High Court. The medical bail was extended from time to time. However, in on April 13 this year, the High Court refused to grant him permanent bail and extended the medical bail temporarily by three more months. He was asked to surrender in jail after the period of three months. The Supreme Court extended the temporary bail period until further orders while considering his SLP.

Senior Advocate Anand Grover, appearing for Rao, submitted that he has various underlying comorbidities including Parkinson's decease. When the bench asked about the stage of trial, Grover replied that it has not commenced and not even charges have been framed.

"The trial will take at least 10 years even if it starts today and there are 16 accused", Grover submitted.

Additional Solicitor General SV Raju, appearing for the National Investigation Agency, blamed the accused persons for delaying the trial by filing repeated applications. The ASG also said that the Rao's medical conditions are not very serious. The scan reports do not show Parkinson's. He was hospitalized only because of COVID.

The ASG said that he was under house arrest for about three months from August 28, 2018 and was taken to Taloja prison only on November 17, 2018.

"So the investigating officer had sufficient opportunity for custodial interrogation", Justice Lalit said. The ASG said that even after that period, he was in hospital most of the time.

"The broad picture is that he has been under custody for over two and half years, and he is 82 years. It is not your case that he has misused the liberty" Justice Lalit observed.

"If there is an immediate prospect of the trial getting over, we can understand. You as a counsel tell us how long will it take for the trial to complete?", Justice Lalit asked.

"One and half years", ASG said.

The ASG said that in UAPA cases, the age of the accused is not a factor and that the accused was involved in serious and nefarious activities against the State. "Age is not relevant owing to the gravity of the offences. Please see his conduct. He is trying to overthrow the democratically elected government",he said.

He referred to the portions from the NIA's counter-affidavit relating to allegations against Rao. The ASG read out a letter allegedly sent by one accused Rona Wilson to one "Comrade Prakash" and said that the accused persons were financing the procurements of illegal weapons to be used against the Indian Army.

Justice Lalit also observed that the "Comrade" to whom the letter has been addressed is not in NIA's custody and asked how the agency will prove the letter by linking it to Rao.

ASG replied there are emails which could be proved under Section 65B of the Evidence Act.

"You must have kept a strict vigil then. Have you come across any emails from him in past 6 months?. Have you gone to his house and checked his computers or made some requisitions", Justice Lalit asked.

"There cannot be medical bail in the background of such serious anti national activity. There has to be extra ordinary medical grounds. There is nothing serious apart from the age. It was only magnanimity of HC that he was granted bail", ASG argued.

The bench asked if Section 43D5 does not allow medical bail, then why did the NIA not challenge the Bombay High Court's order.

"They were ill-advised, it should have been challenged", ASG said.

The bench at this juncture referred to the 2021 judgment in the case Union of India vs Najeeb which held that Section 43D(5) UAPA does not limit the power of Constitutional Courts to grant bail on grounds of violation of fundamental rights.

The ASG then referred to an article in "India Today" about the red terror belt.

"Unless it is on record, we cannot put something on our own", Justice Lalit replied.

The ASG then said that the Maoists are responsible for ambushing security forces.

"According to your chargesheet, how many deaths these persons are responsible for?", Justice Lalit asked.

"According to chargesheet, no death at all, no terrorist activity, and it is all based on electronic evidence which we are disputing", Grover replied.

The ASG said the accused are responsible for the death of one person. When Justice Lalit asked where did the person die, ASG replied "Bhima Koregaon".

"Bhima Koregaon is in Pune, it happened during the agitation. According to you, are the accused responsible for deaths in Gadhchhiroli or Andhra-Telangana belt?", Justice Lalit asked.

Justice Lalit also asked if Comrade Milind is in custody. ASG replied that he has been killed.

"How are you going to prove the contents of the letter?", Justice Lalit asked.

"The letters are recovered from the laptops", ASG said.

The ASG suggested that the matter be adjourned for six months and in the meanwhile Rao could be examined by a medical board and the progress of trial can be ascertained.

In rejoinder, Grover submitted that all the so-called letters are allegedly recovered from laptops and that there are international forensic reports which show that the documents are planted. He also said that the cloned copies of the electronic evidence have not yet been given to the accused.

"How long should I be in jail? Till death? I should die in jail. They want me to die in jail like Stan Swamy", Grover said.

Grover said that Rao is a Telugu poet and he has been acquitted in all other cases. The NIA has no case that Rao has misused the liberty granted to him.

Rao has conditions of Parkinsons and other ailments which cannot be treated at Taloja jail. "I will die if I am sent back to Taloja", Grover said. Pointing out that another accused in the case, Sudha Bharadwaj, has been granted statutory bail, Grover asked why should Rao be treated differently "when he is in the same boat as Sudha Bharadwaj".