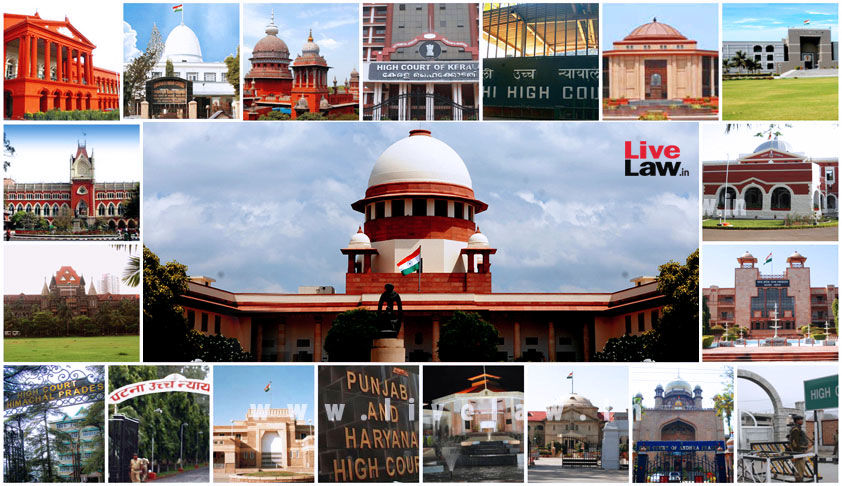 The Supreme Court on Thursday said that it was intending to lay down guidelines for the appointment of ad-hoc judges in the High Courts under Article 224A of the Constitution to tackle the problem of mounting case arrears.

While considering a PIL filed by an NGO named Lok Prahari seeking the use of Article 224A, a bench comprising Chief Justice of India SA Bobde, Justices Sanjay Kishan Kaul and Surya Kant required the senior advocates representing different High Courts to submit suggestions regarding the appointment process, after having a conference with each other.

The major aspects discussed by the bench during a hearing session which lasted for nearly two hours were :

"We want to lay down circumstances in which appointments process for ad-hoc judges should be activated", CJI SA Bobde said during the hearing.

Justice SK Kaul said that ad-hoc judges will only hear the old pending cases and not the fresh matters.

The CJI told the various senior advocates appearing in the matter on behalf of High Courts that their assistance will be needed to lay down the principles in this regard.

"There must be a principle for activating the process for appointing ad-hoc judges. That principle is linked to pendency. We want your assistance to determine what should be the level of pendency at which this process must be activated. If you assit us, we can provide a bench mark, which can alert the Chief Justices. What is the point at which pendency should have reached and whether the pendency should be branch wise or generally. Once we have the benchmark, the process should be triggered off, and the CJ will keep a panel of former judges, and from that panel he'll make appointments.

Second is, how many appointments should be made? We will have to say, for this much pendency, one judge can be appointed. Beyond that, one more. This will have to determined scientifically to avoid arbitrariness.

The bench asked Senior Advocate Arvind P Datar, who was representing the Orissa High Court, to take the initiative to convene a virtual meeting with all other senior lawyers in the matter and to submit joint suggestions by next Wednesday. The bench will consider the matter on next Thursday, April 15.

Vacancy should be the benchmark instead of pendency, Senior Adv Basant suggests

Senior Advocate R Basant, appearing for the Kerala High Court, suggested that the bench mark for use of Article 224A should be the level of vacancies in the High Courts than the pendency.

"The remedy cannot be worse than the malady. All these calculations about pendency are cumbersome. Will it not be better if the process is triggered if the number of judges go below a percentage. Otherwise we'll have to calculate the arrears, which keep on fluctuating. If the persons in office fall short of 5 or 10 percentage, activate the process under Article 224A. Will it not be better?", Basant suggested.

Taking a different view, the CJI said that there will be the issue of pendency even if there are no vacancies in a High Court.

"If there is a High Court with no vacancy but a lot of pendency, should appointments not he made?!There are High Courts where there is one Vacancy but cases are pending", the CJI said.

Is Collegium route needed for Article 224A?

Senior Advocate Basant also said that the use of the term ad-hoc judges is wrong. He said that the appointment of additional or acting judges is envisaged under Article 224 of the Constitution. However, Article 224A speaks of a request made by the Chief Justice to a former judge to sit and decide pending cases.

"They are not appointees. They are requestees", Basant said. The senior counsel further said that discretion of the Chief Justice of the High Court under Article 224A cannot be 'caged' by guidelines. He added that there was no requirement of taking the collegium route for the purpose of Article 224A.

"If we read Article 224A, it only refers to Chief Justice. The reading of the collegium requirement into Article 224A is not intended at all. It is not an appointment, but only a request to sit and act. The rigmarole of collegium is not required. The requirement of going it to the ministry, collegium etc was not the intention of Article 224A at all", the senior counsel, who also happens to be a former judge of the Kerala High Court, said.

Senior Advocate Arvind Datar also expressed the similar view. Since the persons chosen under Article 224A are retired judges who have served the High Court for several years, the same process for appointment of regular judges need not be followed, he suggested.

"The retired judge need not go through the entire rigmarole of HC collegium, SC collegium etc. Our suggestion is to simplify the process", Datar said.

While the bench agreed that the process has to be simplified as regards Article 224A, it was not in favour of wholly excluding the collegium from the process.

"We understand the importance of collegium and the importance of the matter going through the ministry to check the suitability of candidate, and to see his antecedents, It is correct to say al this may not be necessary as the man has worked for some years. But his continued fitness to decide cases must be looked into. How will the president know unless the matter is examined by the Ministry", the CJI observed.

Senior Advocate Ravindra Shrivastava, appearing for the Madhya Pradesh High Court, said that if the same process is adopted for Article 224A, the same problem of files pending in Ministry might arise.

"Larger problem is, President has to give assent and that's when role of Central govt will come in and problems will be caused as there can be delay. The whole intention would be frustrated", Srivastava said.

Senior Advocate Vikas Singh said that term ad-hoc judge may not be appropriate for judges under Article 224A. He said that the term 'ad-hoc judge' is used only once in the Constitution, in Article 127.

Vikas Singh also said that there should be a norm that the Chief Justice should not make a recommendation for ad-hoc judges without making recommendations for regular judges. He said that he was supporting the submission made by the Centre that ad-hoc judges can be appointed only after regular vacancies are filled.

The hearing also witnessed what should be the allowances for ad-hoc judges. It was pointed out to the bench that Article 217 uses the word "allowances", which is to be determined by the President.

The CJI asked if the allowances should be determined on a case-to-case basis or as a general rule.

Senior Advocate Datar suggested that a uniform criteria across the country will be better.

Senior Advocate Ravindra Srivastava suggested that the allowances should take into account the pension already being drawn by the ex-judges.

"It has to be anything minus the pension", Srivastava said. "Under Articel 224A there is no appointment. The Chief Justice requests the ex-judge. There is no concept of salary, he will be paid what the President determines as the allowances. He is not a judge, just deemed to be a judge. He is not an appointee. He is appointed only to tide over an emergency", he explained.

Senior Advocate Vikas Singh said that retired judges often get lucrative assignments as arbitrators, and this factor should be taken note of while determining the allowances.

The bench has asked the Senior Advocates representing different High Courts to come with a joint suggestion on the points discussed during the hearing.

"There is a natural deadline to this case", the CJI said hinting at his retirement on April 23.

The CJI asked the senior lawyers to submit the joint suggestions by next Wednesday and said that the matter will be heard on next Thursday, April 15.