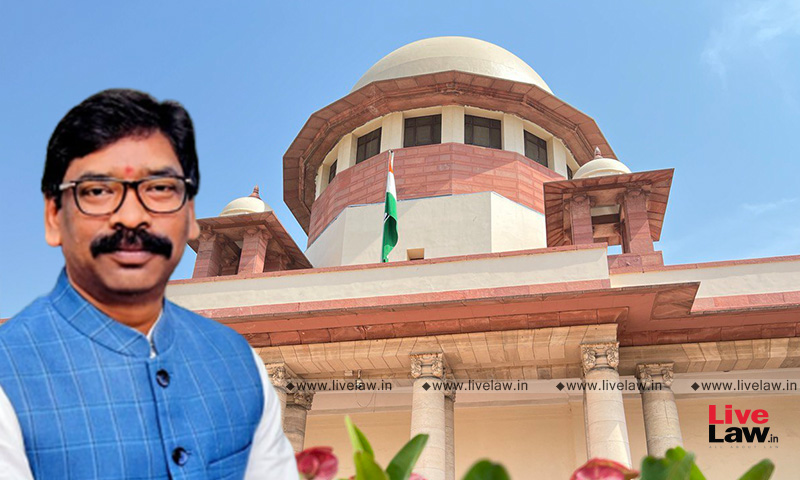 The Supreme Court on Tuesday stayed proceedings before Jharkhand High Court on PILs filed against Chief Minister Hemant Soren alleging money laundering through shell companies and obtaining a mining lease while he was in power.

A Bench of Justices UU Lalit, Ravindra Bhat and Sudhanshu Dhulia was considering the petitions moved by the Jharkhand State government and CM Soren challenging the High Court's order which accepted maintainability of PIL seeking probe against him. While staying the High Court proceedings, the bench also reserved its judgement in the matter.

"Order reserved. Since the Court is seized of the matter, the High Court shall not proceed further with writ petitions."

During the hearing, Senior Advocate Kapil Sibal appearing for State government submitted an array of submissions which included, showcasing the questionable conduct of the original petitioner, how the High Court looked into the merits of the matter despite the Supreme Court order which asked it to consider maintainability first and how the Enforcement Directorate produced materials in a sealed cover without there being any incriminating evidence against Soren.

Sibal submitted that the original petitioner did not file a First Information Report and directly approached the High Court. He also brought to notice how the High Court was hearing the matter in an urgent matter, by conducting hearings even on Saturdays.

"The HC had decided on maintainability even before all the documents were placed before it. When we had objections, we filed affidavits….. I have to say this in open court, milords, I am sorry. Where is the occasion in the matter that you are holding the court outside the state and hearing the matter. What is the urgency?"

Senior Advocate Mukul Rohatgi for the CM Soren submitted how no credentials were shown to the satisfaction of the court , how the petitioner and his advocate suppressed the PILs that were filed by them and how there was no prima facie satisfaction of the High Court in the matter.

Second, credentials of petitioner become irrelevant when there's an offence. The actual question then would be whether there's a prima facie offence or not, he argued.

The Court then questioned the grounds on which ED proceeded in the matter.

"A ground has to be made in the petition itself. Let's not go into ED's sealed cover. Otherwise, it shows that you just make a bare allegation against a person, and because he's a person holding political office… then the Court must embark on that."

The advocate appearing for the original petitioner supported ASG Raju's submissions on the maintainability of the plea. He also sought for protection of the petitioner and his family.

Based this submission, the Court asked Sibal to ensure his protection.

During the previous hearing, the Court had asked Soren, to submit a copy of the writ petition filed before the High Court which had sought an independent probe against him.

A detailed report on today's hearing will be updated separately.