'Liberty Is So Precious; But We Must Give A Sense Of Responsibility To High Courts' : SC On 'Routine' Stay Orders Under Section 482 CrPC 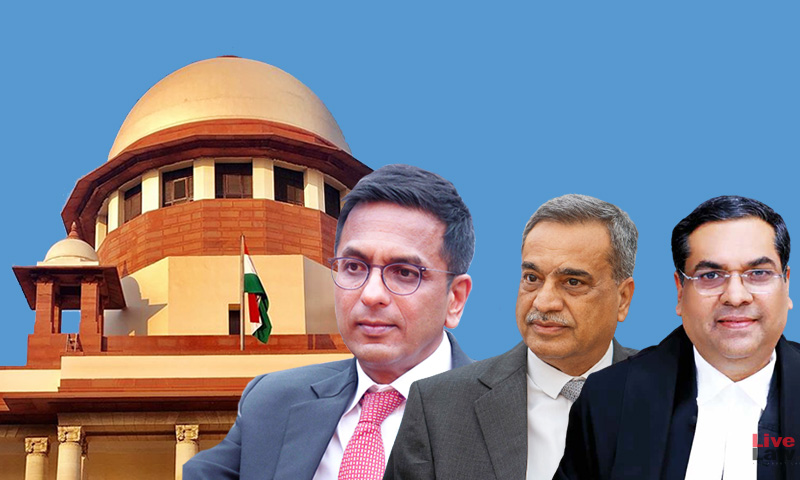 The Supreme Court on Tuesday expressed concern regarding the rising trend among High Courts across the country to routinely grant interim relief by way of a stay on any coercive action pending a writ petition or a plea under section 482, CrPC for quashing of criminal proceedings.The bench of Justices D. Y. Chandrachud, M. R. Shah and Sanjiv Khanna was considering an SLP arising out of...

The Supreme Court on Tuesday expressed concern regarding the rising trend among High Courts across the country to routinely grant interim relief by way of a stay on any coercive action pending a writ petition or a plea under section 482, CrPC for quashing of criminal proceedings.

The bench of Justices D. Y. Chandrachud, M. R. Shah and Sanjiv Khanna was considering an SLP arising out of a September, 2020 order of the Bombay High Court on a writ petition. While granting time for the filing of a reply affidavit with additional documents, the High Court had in the interim directed that no coercive measures be adopted against the present respondents (director of a real estate development company and his business partners) in respect of the FIR registered by the present petitioner (Neeharika Infrastructure Pvt Ltd) with the Economic Offences Wing for alleged offences under Sections 406, 420, 465, 468, 471 and 120B of the IPC
On October 12 last year, a bench headed by Justice Chandrachud had issued notice on the SLP, and granted an ad-interim stay on the aforesaid direction of the High Court.
The bench had recorded that three orders were passed by the Additional Sessions Judge, City Sessions Court, Mumbai on 15 October 2019 under Section 438 of the CrPC granting interim protection from arrest to the respondents.
Also Read Arnab Goswami Case : 'If This Court Does Not Interfere Today, We Are Travelling On Path Of Destruction', Says Justice Chandrachud

Mr Shyam Divan, Senior Counsel had submitted that the above orders required the respondents to attend the Police Station on 17 October 2019, 19 October 2019 and 22 October 2019 and to cooperate in the investigation. He had urged that on 17 December 2019, the investigating officer in the EOW addressed communications to the Sessions Court stating that the accused were not cooperating in the investigation. Moreover, it was submitted that the protection which was granted by the Sessions Court was extended from time to time and nearly a year thereafter, a writ petition was moved before the Bombay High Court in which a blanket order has been passed on 28 September 2020. It was submitted that since the respondents were protected by an interim stay of arrest by the Sessions Court, there was no occasion to seek a blanket direction of the High Court restraining the investigating officer from taking coercive measures and such an application is an abuse of the process. It had been urged that the High Court passed an order directing that no coercive measures would be adopted without any reasons being indicated.

"In a large number of matters, we see that courts are saying 'Issue notice. No coercive action', 'Issue notice. No coercive action' under 482!", remarked Justice Shah on Tuesday.
"When hearing an application for anticipatory bail, it is understandable. Because under section 438 (of the CrPC; anticipatory bail), the power is there. When we issue notice in 438, we say that in the interim, there will be a stay on arrest. In a 438 plea, after notice is issued, if the petitioner happens to be arrested, the application becomes infructuous. So the stay is granted ", explained Justice Chandrachud
"But in a 482 petition for quashing, without applying their minds to the parameters of 482, just like that a stay of arrest is being granted! This has become another ground for bail!", continued the judge.
"This also results in forum shopping. When there is one bench hearing anticipatory bail pleas and another dealing with 482 petitions, if the former happens to be a strict bench, the lawyers prefer to go to the latter and get an order under 482 which they could not have obtained under 438", remarked Justice Shah.
Commenting that senior advocate K. V. Vishwanath, who was appearing in the matter, was smiling at the above observation, Justice Shah quipped, "I also used to be on that side, Mr. Vishwanath"
"Liberty is so precious. We do not want to denude the courts of the power. Exceptional situations may arise. But we must give a sense of responsibility to the High Courts", expressed Justice Chandrachud.
"Such orders cannot be passed routinely", added Justice Shah.
The bench contemplated laying down principles in this behalf.

Also Read Courts Must Ensure That Criminal Law Does Not Become A Weapon For Selective Harassment Of Citizens: SC In Arnab Goswami Judgment

Another bench headed by Justice Chandrachud had in November last year agreed to examine the issue whether a High Court, while considering a petition to quash FIR, pass an order protecting the accused from arrest until the submission of the charge sheet under Section 173(2) of the Code of Criminal Procedure.

Last week, a bench of Justices Chandrachud and Shah observed that a blanket order of protection from arrest cannot be passed by the High Court while dismissing a petition filed under Section 482 of Code of Criminal Procedure seeking quashing of FIR