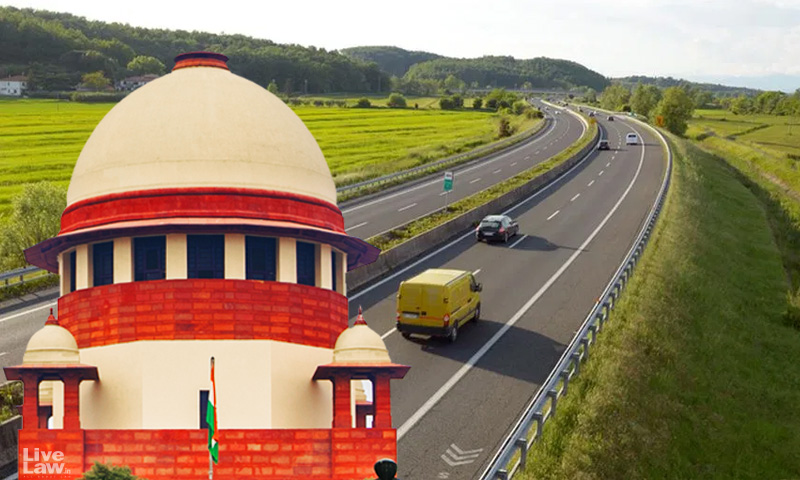 As regards the highway expansion project between Karnataka and Tamil Nadu, the Supreme Court on Thursday stayed the NGT order to the extent it required the NHAI to first procure the Environmental Clearance from the Union MoEF, change the alignment to avoid loss to water bodies and construct a flyover for the entire stretch of the reserved forest, on account of which the project to widen...

As regards the highway expansion project between Karnataka and Tamil Nadu, the Supreme Court on Thursday stayed the NGT order to the extent it required the NHAI to first procure the Environmental Clearance from the Union MoEF, change the alignment to avoid loss to water bodies and construct a flyover for the entire stretch of the reserved forest, on account of which the project to widen NH-844 stood halted.

Issuing notice on the NHAI's appeal against the October 9, 2019 order of the NGT and subsequent dismissal of its review on June 16, the bench headed by Justice Rohinton Nariman stayed the impugned NGT order in so far as it goes beyond the assurance given by the NHAI before the Madras High Court that all the suggestions given by Public Works Department, Tamil Nadu, will be accepted and the highway will be laid, in accordance with the suggestions of the Government of Tamil Nadu.

The applicant before the NGT had also previously filed a writ petition before the Madras High Court to direct the respondents, to realign the newly proposed Highways Project NH 844, between Neeralur and Onnalvadi through Hosur, in such a manner, without in any way affecting the water bodies.

"You are saying you were not heard?", asked Justice Nariman from AG K. K. Venugopal on Thursday.

"Not only was I not heard, but the NGT believes that it has inherent powers to entertain matters like the superior courts...An application needs to be filed (for the NGT to take cognisance) and the application has to be of the prescribed format, in the 'Form' stipulated in the Rules [NGT (Practices and Procedure) Rules, 2011]. The Rules require that notice is served either by registered post or by personal service. A Rule also provides that unless the respondent is served, the case cannot be taken up for hearing", replied the AG.

"Without the 'Form' being filled and without notice being issued, the NGT heard the matter", he argued.

"But you have agreed before the High Court (to comply with environmental considerations)?", asked Justice Nariman.

In response, the AG quoted paragraph 12 of the High Court judgment of August 6, 2019- "Today, at the time of hearing, Mr.Su.Srinivasan, learned counsel for National Highways Authority of India, respondents 1 and 2 has categorically stated that all the suggestions given by Public Works Department, Tamil Nadu, will be accepted and the highway will be laid, in accordance with the suggestions of the Government of Tamil Nadu. The statement made by the learned counsel is taken on record"

"So we will stay the additional conditions by the NGT", observed Justice Nariman.

Recording the AG's submission that the "statement of his predecessor made before the Madras High Court on 6.8.2019 will be honoured", the bench issued notice, also staying the impugned judgment of the NGT to the extent it goes beyond the assurance given in the aforesaid paragraph 12.

On 6.8.2019, After taking into account the counter affidavit filed by the National Highways Authority of India, inspection notes of the Executive Engineer, PWD/WRD, and the statement of the counsel for NHAI that all the suggestions of Public Works Department would be accepted, regarding water bodies, the High Court had disposed off the writ petition, directing the NHAI to form the Highway as per its pleadings in the counter affidavit and submission of its counsel.

The NGT had registered an Application based on a complaint received by post. The letter petition received "highlighted the serious consequence of a highway being NH-844 proposed through 7 important lakes/water bodies in and around Hosur, Tamil Nadu. Hosur is stated to be premium farming, agriculture and horticulture center of the State and, therefore, the proposal of such project would further burden the existing water scarcity. Besides that, the inflow to the water bodies in the area shall also be affected as the 7 lakes lie within the space of 7 Kms". "As the construction of the National Highway would be through those water bodies, it would also effect the water flow and inter-linking of water resources apart from causing irreparable damage to the agriculture and horticulture of the villages. It is also contended that destruction already caused by the NH-44 to the critical elephant habitat would be aggravated as the proposal for the present project for the NH 844 highway would increase the traffic load and consume more area of the reserve forest", the NGT had noted.

"The Nodal Agency will be the SEIAA, Tamil Nadu for compliance and coordination. Let the action taken report be filed before this Tribunal within one month from the date of receipt of copy of this order...Needless to state that order of National Green Tribunal is binding as a decree of Court and non-compliance is actionable by way of punitive action including prosecution, in terms of the National Green Tribunal Act, 2010", the Tribunal had directed.

Accordingly, a factual report had come to be filed before the NGT filed 12.06.2019 based on site visit and response of all concerned stakeholders including NHAI. The report contained following general recommendations:

The Inspection Team recommends the following:

The project authority claims that the total length of the proposed widening is less than 100 km (95km) and hence it does not attract EIA Notification. 2006 and its amendment. The Committee noted that the proposed project also involves construction of greenfield road for a length of about 15 km from Neralur before it joins the existing roads. SH 85. According to the EIA notification, 2006 and its amendments, construction of New National Highways require prior Environment clearance from Ministry of Environment Forests & climate change

As per the suggestion given in the "Eco-friendly Measures to Mitigate Impacts of Linear Infrastructure on Wild Life" it is appropriate for NHAI to propose 1 km flyover for the entire stretch of Sanamavu reserve forest."

The NGT had been of the view that since the recommendations are based on facts found during site visit and after interaction with NHAI, "it is not necessary to issue any separate notice to NHAI, who is the project proponent". "The NHAI may act according to the recommendations and ensure that requisite EIA is secured and necessary change made in the alignment to avoid loss to water bodies, apart from taking eco-friendly measures in mitigating impact on wildlife by constructing flyover on the stretch of the reserved forest. The SEIAA may ensure compliance of the recommendations", the NGT bench headed by Chairman, and former Supreme Court judge, Justice A. K. Goel had directed.