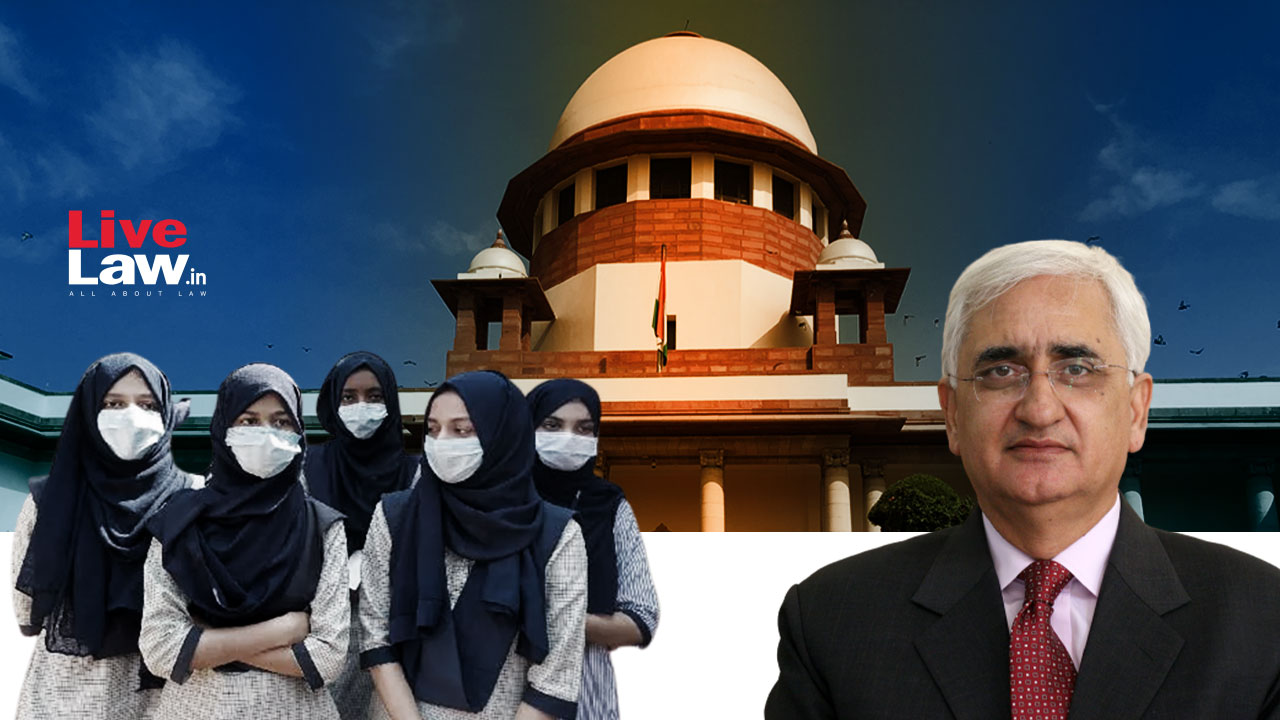 A Division Bench of the Supreme Court on Monday continued to hear the challenge against a Government Order (GO) passed by the State of Karnataka that effectively allowed college development committees to place a ban on the hijab in government colleges. A batch of 23 petitions was filed in this connection, some of which were writ petitions placed directly before the Supreme Court, while...

A Division Bench of the Supreme Court on Monday continued to hear the challenge against a Government Order (GO) passed by the State of Karnataka that effectively allowed college development committees to place a ban on the hijab in government colleges. A batch of 23 petitions was filed in this connection, some of which were writ petitions placed directly before the Supreme Court, while others were appeals by special leave preferred against the judgement of the Karnataka High Court upholding the impugned order. The Bench comprised Justices Hemant Gupta and Sudhanshu Dhulia.

Senior Advocate Yusuf Muchhala argued extensively about the interplay between the freedom of speech and expression in Article 19(1)(a), the right to privacy read into the right to life and liberty under Article 21, and the freedom of conscience and free profession, practice and propagation of religion under Article 25. Next, he highlighted the complementarity of the two allied, but distinct concepts encapsulated in Article 25, namely, the freedom of conscience, and the freedom of religion. He also contended that since Article 26, which conferred on religious denominations, certain fundamental rights, was not invoked, the doctrine of essential religious practice would not be pressed into service with respect to the practices observed by individuals. He also questioned the competence of the Court to venture into interpreting religious scriptures, claiming that according to the precepts of judicial wisdom, the High Court of Karnataka should have refrained from touching a particular field in which it had no expertise.

The Court also heard Senior Advocate Salman Khurshid, who argued at length that the wearing of the hijab was ordained by the Holy Quran and as such, was obligatory. His contention was that the Karnataka High Court had misinterpreted the nature of the injunction, claiming it to be merely "recommendatory", when it was, in fact, a diktat revealed in the word of God. He also argued that the wearing of the hijab would be protected under the Constitution as a cultural practice, referring to Article 29(1) and Sub-clause (f) of Article 51A.

The matter is listed to be heard again on September 14.

Status of Education Among Muslim Girls

Senior Advocate Yusuf Muchhala prefaced his arguments by offering a conspectus on the status of education amount Muslim girls, basis his submissions on studies conducted by the National University of Education, Planning and Administration (NUEPA), which he said already formed a part of government records. He told the Court that Muslim girls were already on a disadvantaged footing because of, inter alia, their early withdrawal from school so as to not be 'unsuitable' for marriage, the disparity between boys and girls and the differential treatment meted out to the girls, and the hostility faced by them from religious and cultural majorities. The non-recognition of social and cultural practices by the school administration, teachers and students, Mr. Muchhala argued, was a roadblock to providing Muslim girls access to education. There was a need for inclusion, awareness, and sensitivity in the school ambience, he concluded.

Drawing an analogy with cultural practices, which were generally tolerated, and accepted, Mr. Muchhala argued:

Mr. Muchhala, on a conjoined reading of Articles 19(1)(a), 21, and 25, asserted that none of these rights, namely, that of free speech, the right to personal dignity, and privacy, and the freedom of conscience and the right to practice religion, have all been violated. The High Court also failed to take into consideration the doctrine of proportionality, he claimed.

With respect to the violation of the freedom of speech and expression, and how it encompassed personal appearance and choice of dressing, Mr. Muchhala relied on National Legal Services Authority (NALSA) v. Union of India [AIR 2014 SC 1863]. Quoting from this Supreme Court judgement and two judgements rendered by American Courts, Mr. Muchhala argued that the hijab was a "necessary symbol of identity" of a practising Muslim girl.

Mr. Muchhala relied on Justice K.S. Puttaswamy (Retd.) v. Union of India [AIR 2017 SC 4161] to support his arguments relating to the privacy and dignity of individuals. He explained that decisional autonomy was an important element of privacy, which in turn was an essential aspect of dignity. He explained:

"Women who wear hijabs should not be looked upon as caricatures. They should be looked upon with dignity, they are strong-willed women, who feel empowered from the act of wearing hijab, and we have no right to ridicule them. I have children – they may choose to wear the hijab, or not to wear the hijab but I cannot ridicule them for their choices."

Further, Mr. Muchhala argued that the prohibition on wearing of the hijab was not justified under Article 25. While on this topic, he also elaborated on the non-exclusivity and complementarity of the freedom of conscience and the freedom of religion. He also contended that the question of whether it was an essential religious practice should have only been broached if the community rights of religious denominations under Article 26 were violated, and not with respect to the infringement of the rights of individuals under the preceding Article.

Notably, he also asked the Court whether a person could be said to no longer have the right to education beyond the prescribed age of 14 years under Article 21A, since it was education that "made life meaningful".

Incompetence of the Court to Interpret the Holy Quran

Mr. Muchhala argued with great vigour that by transgressing into the domain of interpreting religious texts, the High Court had overstepped its powers. This, according to Mr. Muchhala was highly objectionable since the Court was not versed in Arabic, nor was it familiar with the canons of interpretation:

"Scholars may disagree, interpreters may disagree, but a laywoman may pick up one interpretation and decide to follow it. The court, then, cannot ask why do you follow one and not follow the other… The High Court should have refrained from trying to interpret the Quran."

Justice Dhulia instantly objected to this line of argument, and pointed out:

"It was you who went to Court and said this is an essential religious practice. You asserted a right. What option did the High Court have but to examine it. You, yourself wanted this matter to be referred to a nine-Judge Bench. The logical conclusion of what you are saying is that the nine-Judge Bench also cannot go into the question of essentiality. You are contradicting yourself."

"While considering the question, the nine-Judge Bench must restrict itself to considering what is essential of religion, and not what is essential to religion. This is what was held in Commissioner Hindu Religious Endowments Madras v. Sri Lakshmindra Thirtha Swamiar of Sri Shirur Mutt [AIR 1954 SC 282] but later expanded in Durgah Committee, Ajmer v. Syed Hussain Ali [AIR 1961 SC 1402]… It is only judicial wisdom to not touch a field in which they have no expertise. The High Court, when encountered with ERP, should have said hands off, we cannot look into that."

Religious Sanction to Wear the Hijab

Senior Advocate Salman Khurshid explained that the revelations in the Holy Quran descended from God through the Prophet, who had memorised them and repeated the revelations to his companions who, in turn, wrote the revelations down. Unlike most other religions, he explained, Islam did not have the binary of obligatory, and non-obligatory. He said it was all obligatory because ultimately it was the word of God. He reminded:

"There is farz which is obligatory from the Quran, then there is what has been gotten from the Prophet reduced into Hadiths, known as sunna. This is just as binding as farz. It is critical for Your Lordships to keep this in mind."

Although God has been described as forgiving, benevolent, tolerant, and loving, the Quran is also clear that those who defied the will of God would burn in hellfire, he explained, referring to several verses and chapters of the holy scripture.

Distinguishing between worshippers of other Gods and non-believers (kafirs), Mr. Khurshid clarified that the phrase 'La-kum dee-nu-koom wa lee-ya deen' (For you is your religion, and for me is my religion) was incorrectly invoked by the Karnataka High Court since it only expressed tolerance for people who believed in God but did not subscribe to Islam. This phrase could not be used as justification for terming the practice of wearing the hijab as non-obligatory, he explained.

Mr. Khurshid placed heavy reliance on Article 29(1), submitting that if there was a culture of dressing in a particular manner, or exhibiting social messages by a certain method, or speaking in a particular language, it would be protected under the aforesaid Article. This constitutional provision sought to preserve culture, which was inextricably linked with the identity of an individual.

He also referred to the fundamental duties of the citizens given in Article 51A, observing that although the Karnataka High Court had referred to Sub-clause (h) which spoke about the duty to develop the scientific temper, humanism and the spirit of inquiry and reform, it had failed to account for Sub-clause (f), which sought to value and preserve the rich heritage of our composite culture. In valuing and preserving our composite culture, the sub-cultures of different communities must be preserved and efforts to promote one "unitary culture" must be resisted, Mr. Khurshid asserted. According to him, this composite culture is where the idea of diversity came from. However, there may be overriding circumstances where these sub-cultures could be made to become subservient, he cautioned. In the present case, however, the failure to preserve the "sub-culture" of wearing the hijab even in a "qualified public space" was not justified because:

"In parts of Rajasthan, Madhya Pradesh, Gujarat, ghoonghat is a common practice. Even otherwise, those who do not ordinarily cover their heads, cover their heads when going into a gurudwara. It is an Indian tradition to cover your head while going into a Mosque, which is not seen in Saudi Arabia and some other countries. This is the Indian cultural element that has qualified the practices that have travelled from the place of origin of Islam…There may be good reasons for certain dress code, but what is provided by the Bar Council of India, for instance, I will wear, but does it mean that I cannot wear something other than this, i.e., something important for my religion, or culture. The rights of privacy, dignity, appearance, choice are there, subject of course to qualified public space. Therefore, we will not say that the uniform must be dispensed with, but this is something in addition to uniform."

Preservation of the composite culture and the freedom of conscience and religion were the ideals that informed the creation of the social pact that led to the formation of modern-day society, Mr. Khurshid explained.

Having heard the arguments advanced by Senior Advocates Yusuf Machhala and Salman Khurshid, the Bench decided to list the matter for hearing again on September 14.