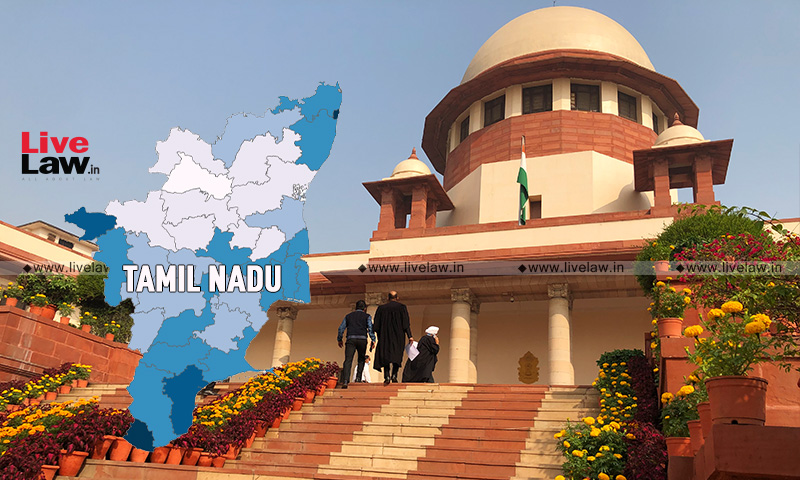 The Supreme Court on Thursday held the 2021 Tamil Nadu Act that provided 10.5% reservation in educational institutions and government jobs for the Vanniyar community out of the 20% reservation available to the Most Backward Classes to be unconstitutional.The Court upheld the Madras High Court order quashing Tamil Nadu law ("2021 Act"), the Court held that the State had the...

The Supreme Court on Thursday held the 2021 Tamil Nadu Act that provided 10.5% reservation in educational institutions and government jobs for the Vanniyar community out of the 20% reservation available to the Most Backward Classes to be unconstitutional.

The Court upheld the Madras High Court order quashing Tamil Nadu law ("2021 Act"), the Court held that the State had the legislative competence to make sub-classifications among the backward classes.

A bench comprising Justice L Nageswara Rao and BR Gavai observed that the State Government failed to provide data that Vanniyars required to be treated as a separate group within the MBCs.

With respect to the issue of caste being the determinant for internal reservation, the Bench was of the view that caste can be the starting point for providing internal reservation, but the State Government has to justify that it was reasonable and show that caste was not the sole basis for classification. The Bench noted that the State Government was not justified in basing the sub-classification on the letter of Justice Thanikachalam, Chairman of the Tamil Nadu Backward Classes Commission, which relied on the Janarthanam Commission Report wherein the data was antiquated and based on population. All the members of the Janarthanam Commission, apart from the Chairman, were also not in favour of recommending internal reservation, in the absence of the updates caste-based data. The Bench held that the sub-classification was not backed by relevant quantifiable data rendering the 2021 Act violative of Articles 14, 15 and 16 of the Constitution of India.

"We are of the opinion that there is no basis to treat vanniyar as a separate group compared to others backward classes...Thus the 2021 act is ultra vires Articles 14 and 16", Justice L Nageswara Rao read out the operative portion of the judgment. Full copy of the judgment is yet to be uploaded.

The Court however held that the State Government had the legislative competence to pass the Act.

The Bench held that there was no bar on the legislative competence of the State to enact the 2021 Act. It was of the opinion that the Constitution (105th Amendment) Act, 2021 has prospective effect and therefore during the enactment of the 2021 Act, the Constitution (102nd Amendment) Act, 2018 was in effect. But, considering the fact that the 2021 Act was an extension of the 1994 Act, as it merely apportions the percentage of reservation for the purpose of determining the extent of reservation between MBCs and DNCs already identified pursuant to the enactment of the 1994 Act, it is permissible in terms with the judgment of the Apex Court in Jaishri Patil. Referring to the judgment of the Apex Court in Indra Sawhney, it held that there is no bar in the sub-classification amongst Backward Classes. It was clarified that just because the 1994 Act had received the assent of the President under A. 31C and was put in the Ninth Schedule, it cannot prohibit the State legislature from enacting a law, which is ancillary to the 1994 Act, with the approval of the Governor.

It was clarified that the findings were limited to the issues raised in relation to the 2021 Act and no opinion was expressed on the merit of the writ petitions challenging the 1994 Act, pending before the Apex Court.

The State of Tamil Nadu had, primarily, submitted that the 2021 Act merely sub-classified within the 20% reservation provided to the Most Backward Classes, whereas the respondents argued that the State had attempted to 'identify' communities in derogation of the 102nd Constitutional Amendment Act without placing reliance on any quantifiable data.

The Tamil Nadu Backward Classes, Scheduled Caste and Scheduled Tribes (Reservation of Seats in Educational Institution and Appointments or Posts in the Services Under the State) Act 1993 was enacted which came into force on 19.07.1994 ("1994 Act"). Vide 73rd Constitutional Amendment, the 1994 Act was placed under the Ninth Schedule of the Constitution.

Considering the lack of reliable caste wise population data to administer reservation in Tamil Nadu, the State Government has constituted the "Commission for collection of quantifiable data on castes, communities and Tribes of Tamil Nadu" on 21.12.2020, headed by Justice A. Kulasekaran (Retd) as Chairman. Before the Commission could submit its report, on 26.02.2021, the State Government passed a Bill providing internal reservation of 10.5 % to the Vanniyar Community, which eventually became Act No. 8 of 2021 ("2021 Act"). The constitutional validity of the Act was challenged before the Madras High Court.

Decision of the Madras High Court

Vide order dated 01.11.2021, the Division Bench of the Madras High Court comprising Justices M. Duraiswamy and K. Murali Shankar, quashed the Tamil Nadu law sub-classifying the 20% reservation available to the Most Backward Classes to provide Vanniyar Community 10.5% reservation in educational institutions and government jobs. The High Court had, inter alia, held that the State lacked legislative competence in view of Constitution (102nd Amendment) Act, 2018, which had denuded the State legislature of the power to include or exclude Backward Classes and bestowed the same on the Parliament under Article 342A of the Constitution of India. It was of the view that in the light of Article 31B, the State legislature had no power to enact the impugned Act without first amending the parent Act of 1994, which had received Presidential Assent and had been placed in the Ninth Schedule of the Constitution. The other contentions raised by the petitioners before the High Court that found favour with it was that reservation cannot be solely based on caste and sub-classification cannot be done without quantifiable data to support it.

Contentions raised by the petitioners

Senior Advocate, Dr. Abhishek Singhvi appearing for the State of Tamil Nadu argued that sub-classification was valid as held by the Supreme Court in Vasanth Kumar v. State of Karnataka. The judgment in E.V. Chinnaiah v. State of Andhra Pradesh And Ors. relied upon by the petitioners before the High Court was controverted in terms of State of Punjab v. Davinder Singh, wherein a five judge bench had disagreed with Chinnaiah, and referred the matter to a larger bench. It was averred that if a caste forms a class then reservation can be extended to it. He further argued that the parent Act of 1994 having general uncircumscribed Presidential assent under the Article 31C, assent would not be required again for the 2021 Act which is merely an extension of the parent Act. It was averred that the Constitution (105th Amendment) Act, 2021 was a clarification of the Constitution (102nd Amendment) Act. It clarified that the Parliament never intended to exclude the State list. Mr. Singhvi argued that the findings of the Sattanathan Commission Report, Ambashankar Commission Report, Janarthanam Commission Report and Report of 2021 Commission were based on population census and therefore had backing of quantifiable data.

Senior Advocate, Mr. Rakesh Dwivedi submitted that the legislative competence had to be tested on the touchstone of principles in Article 246 and not Article 31B, which is only an armour of protection for the enactments put in the Ninth Schedule from being assailed on the ground of infringement of the Fundamental Rights. It was asserted that Article 31B does not prescribe the law-making process and is not meant to alter the federal distribution of powers under Article 246 and the three lists in the Seventh Schedule of the Constitution. He argued when the State did not seek the benefit of protection of Article 31C, the High Court should not have delved into issues pertaining to the same. A legislation enacted in exercise of power under Article 246 cannot be struck down, per se, because presidential assent under Article 31C was not sought.

Reading extracts from the reports of the various Committees, Senior Advocate, Mr. Rao demonstrated backwardness of the community. He refuted the finding pertaining to lack of quantifiable data and argued that the 2021 Act did not enlist new caste, but only apportioned existing reservation, which is permissible.

Senior Advocate, Mr. C.S. Vaidyanathan argued that Section 7 of the 1994 Act which mentions that sub-classification can be done by the executive cannot take away the power of the State to legislate on that subject. He argued on the permissibility of sub-classification. It was contended that the 2021 Act was not repugnant to any Central law and did not require presidential assent. He also referred to the Reports of the Commissions to show that the Government has sub-classified on the basis of quantifiable data. Senior Advocate, Mr. P. Wilson also argued on the availability of quantifiable data. Senior Advocate, Mr. Radhakrishnan, inter alia, submitted that a legislation unanimously passed by the State legislature enjoys the presumption of constitutionality and the burden is upon him who attacks it to show that there has been a clear transgression of the constitutional principles.

Senior Advocate, Mr. Gopal Shankaranarayanan appearing for the original petitioner before the High Court argued that after the Constitution (102nd Amendment) Act came into existence, the State could not have identified Socially and Economically Backward Classes. It was highlighted that the State of Tamil Nadu had acted in contravention of the 102nd Amendment and the judgment of the Apex Court in Jaishri Patil v. Chief Minister and Ors. He pointed out that in the process of identifying communities the National Commission for Backward Classes were also not consulted. He was of the opinion that once the Supreme Court gives its final interpretation then the only way to challenge it is by way of a review petition and not by introducing a Constitutional Amendment. It was contended that neither was 105th Amendment retrospective, nor clarificatory.

Senior Advocate, Dr. Rajeev Dhavan submitted that since, the President alone had the power under the Constitution to identify SEBCs, the 2021 Act suffered from constitutional vires as well as incompetency. It was argued that 'changing the basis of judicial pronouncement' and the argument of the 'Constitutional Amendment is clarificatory' cannot go hand in hand. Moreover, he averred that Parliamentary debates cannot be relied upon as the statute is not ambiguous. He submitted that micro-classification cannot be permitted to the extent that principles of equality are replaced by such classification as stated in Col. A.S. Iyer v. Balasubramanyam. He also argued on the point of lack of data in sub-classification. Senior Advocate Mr. S. Nagamuthu controverted the reliance on the Janarthanam Committee Report wherein seven out of eight members had rejected the recommendations; it was based on Ambashankar Commission Report which was rejected by the Government and that data adopted was based on 1921 caste census.