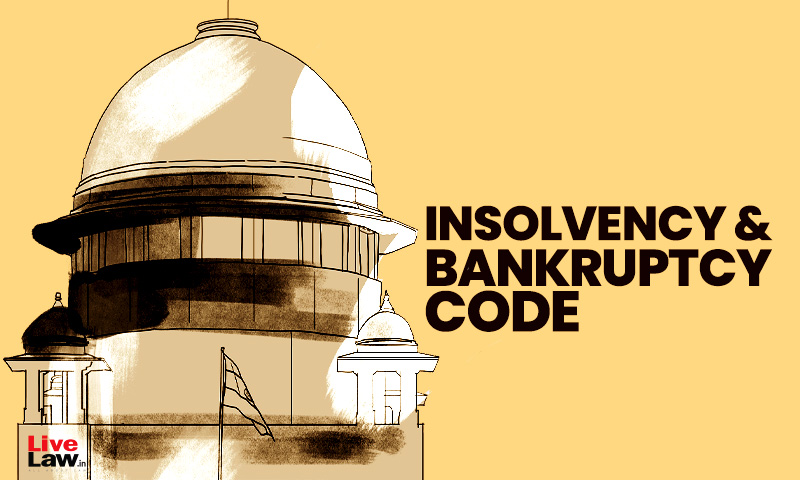 The Supreme Court, on Monday, held that a liability in respect of a claim arising out of a Recovery Certificate under the Recovery of Debts and Bankruptcy Act, 1993 would be a "financial debt" within the meaning of Section 5(8) of the Insolvency and Bankruptcy Code, 2016 (IBC) and a holder of such Recovery Certificate would be a "financial creditor" under Section 5(7) of the IBC.

It further held that a person would be entitled to initiate Corporate Insolvency Resolution Process (CIRP) within a period of three years from the date on which such Recovery Certificate is issued.

The Bench allowed the appeal filed by Kotak Mahindra Bank Ltd. assailing the order of the National Company Law Appellate Tribunal (NCLAT), which had set aside the order of National Company Law Tribunal, Chennai (NCLT), admitting the application filed under Section 7 of the IBC and initiated CIRP, as time-barred. It held that the application was filed within a period of three years from the date on which the Recovery Certificate was issued and was thus within limitation.

Between 1993-1994, Ind Bank Housing Limited (IBHL) sanctioned credit facilities to three companies for which the Corporate Debtor herein stood as the Corporate Guarantor. The borrowers defaulted and consequently all their facilities were classified as Non-Performing Asset. Three recovery suits were filed before the Madras High Court against the three borrowers and the Corporate Debtor. In the meanwhile Kotak Mahindra Bank Ltd. (KMBL) entered into a Deed of Assignment with IBHL on 13.10.2006. Pursuantly, KMBL entered into a compromise with the borrowers. Recording the compromising in its order dated 26.03.2007, the High Court noted that the Corporate Debtor was jointly and severally liable to pay Rs. 29,00,96,918 to KMBL. The borrowers failed to hold up their end of the bargain and demand notices were issued to them along with the Corporate Debtor by KMBL under Section 13(1) of the Securitization and Reconstruction of Financial Assets and Enforcement of Security Interest Act, 2002 (SARFAESI Act), which was followed by possession notice. KMBL further issued a winding up notice to the Corporate Debtor, on 06.05.2008. It filed three applications under Section 31(A) of the Recovery of Debts and Bankruptcy Act, 1993 (Debt Recovery Act) before the Debt Recovery Tribunal. These applications were allowed and recovery certificates were issued on 07.06.2017 and 20.10.2017. On 05.10.2018, KMBL filed an application under Section 7 of the IBC before the NCLT seeking initiation of the CIRP against the Corporate Debtor claiming an amount of Rs 835,93,52,369. It was admitted by the NCLT on 20.09.2019. An appeal was filed by the Director of the Corporate Debtor before NCLAT on the ground that the application under Section 7 was filed after the expiry of the limitation period. The appeal was allowed by NCLAT.

Contention raised by the parties

Senior Advocate, Mr. Guru Krishna Kumar, appearing on behalf of KMBL relied on Dena Bank v. C. Shivakumar Reddy And Anr. wherein the Apex Court had held that once a claim fructifies into a final judgment, and a certificate of recovery is also issued authorising the creditor to realise the decretal amount, a fresh right accrues to the creditor to recover the amount specified in the Recovery Certificate. In view of the said judgment he argued that the application under Section 7 of the IBC filed by KMBL was within the period of three years from the dates of issuance of the certifications. Further he argued that the borrower, who had failed to comply with the compromise entered into with KMBL ought not to be permitted to oppose admission of the application seeking initiation of CIRP.

Senior Advocate, Mr. K.V. Vishwanathan, appearing on behalf of the Corporate Debtor, submitted that the cause of action had merged into the order of issuance of recovery certificate and the debt no longer survives. He relied on State of UP v. Nawab Hussain and Gulabchand Chhotalal Parikh v. State of Bombay to argue that the application under Section 7 of the IBC would amount to a second proceeding for the same cause of action in the teeth of the doctrine of res judicata, more particularly, per rem judicatam. Referring to the judgment of the Apex Court in Paramjeet Singh Patheja v. ICDS Ltd he argued that under Section 19(22A) of the Debt Recovery Act, the recovery certificates cannot be deemed to be 'decree' and therefore KMBL cannot be considered as a decree-holder to initiate proceedings against the Corporate Debtor. He further relied on the judgment of the Tripura High Court in Subhankar Bhowmik v. Union of India And Anr. to submit that even decree-holders cannot initiate CIRP. It was averred that the Dena Bank judgment was per incuriam as it ignored several provisions of the relevant status and judgements of larger bench. Finally, he submitted that the decree-holder cannot be considered as a financial creditor and is not entitled to invoke the provision of Section 7 of the IBC. He defended the order of the NCLAT which had held the application to be time-barred. Senior Advocates, Mr. S. Prabhakaran and Mr. V. Prakash, appearing for the other respondent, argued along similar lines.

In rejoinder, Mr. Kumar, urged that KMBL was indeed a financial creditor as the underlying transactions are such that it constituted financial debt. He also submitted that the judgment debtor does not lose its legal essence or character solely because it has fructified into a Recovery Certificate. Moreover, he asserted that the submission that Dena Bank is per incuriam is without any substance.

On the consideration of the judgment in Dena Bank, the Court was inclined to allow the appeal. However, as Mr. Vishwanathan has assailed the validity of Dena Bank, being per incuriam the provisions of the statute and the decision of the three-Judge Bench of the Apex Court in Jignesh Shah And Anr. v. Union of India And Anr. and Gaurav Hargovindbhai Dave v. Asset Reconstruction Company (India) Limited And Anr., the Court decided to consider his contentions. Referring to various provisions of the IBC, it was observed that when a Corporate Debtor commits a default, a financial creditor or an operational creditor or the Corporate Debtor itself can initiate CIRP. Furthermore, 'default' has been defined as 'non-payment of debt'; 'debt' is defined as 'liability or obligation in respect of a claim which is due from any person and includes a financial debt and operational debt'; 'claim' is defined as 'a right to payment, whether or not such right is reduced to judgment'.

In this backdrop, the Court reckoned that what it ought to consider is whether a liability in respect of a 'claim' arising out of a Recovery Certificate would be included within the meaning of 'financial debt', defined under Section 5(8) of the IBC as 'means a debt along with interest, if any, which is disbursed against the consideration for the time value of money and includes…'. Referring to a catena of judgments on interpretation of the term 'includes', the Court noted that the effect of using the said word would be to enlarge the scope of the statute. It was of the view that since 'include' had been used in the definition of 'financial debt' in Section 5(8), it is not an exhaustive but inclusive list.

Considering the object and purpose of the statute, the Court was of the view that Section 5(8) would include a debt which has crystallised in the form of a decree. Therefore, the liability in respect of a claim arising out of a Recovery Certificate would be a "financial debt" within the ambit of its definition under clause (8) of Section 5 of the IBC, and the holder of such certificate would be a financial creditor under Section 5(7) of the IBC.

The Court noted that a judgment is said to be per incuriam when any provision of a statute, rule or regulation is not brought to the notice of the court or it is inconsistent with previous judgments passed by co-ordinate or larger bench. However, in the case of Dena Bank, the Court found that all relevant provisions of the IBC and earlier judgments were relied upon; neither was it inconsistent with the earlier judgments of the Apex Court.

The Court reckoned that the judgments with respect to res-judicata and cause of action estoppel would not be relevant in the facts of the present case. The submission with respect to Section 19(22A) of the Debt recovery Act, also did not find favour with the Court.

Insolvency and Bankruptcy Code 2016-Section 5(8) - definition of 'financial debt' - means a debt along with interest, if any, which is disbursed against the consideration for the time value of money and includes… - when 'includes' used in interpretation clauses, the effect is to enlarge the meaning of the words or phrases occurring in the body of the statute - the list in the provision is not exhaustive, but inclusive - legislature could not have intended to keep a debt, which is crystallised in the form of a decree, out of the ambit of the provision - liability in respect of a claim arising out of a Recovery Certificate would be a "financial debt" under the provision. [Paragraph Nos. 43 to 53]

Per incurium - incuria means carelessness - a decision or judgment can be per incuriam any provision in a statute, rule or regulation, which was not brought to the notice of the Court - It can also be per incuriam if it is not possible to reconcile its ratio with that of a previously pronounced judgment of a co­equal or larger Bench - Dena Bank v. C. Shivakumar Reddy And Anr. - considered all the relevant provisions of the IBC and the earlier judgments of this court - no inconsistency with the earlier judgments of this Court. [Paragraph No. 67 and 68]