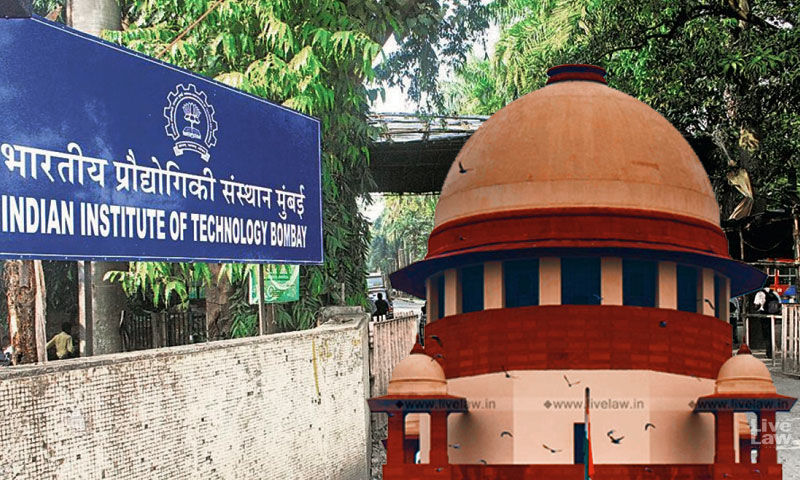 x
"It is elementary common sense. Which student would get into IIT, Bombay and not pay the Rs. 50,000 fee? It is obvious that he had some financial problems", the SC observed.

Noting that it would be a great travesty of justice if a young Dalit student is denied IIT seat merely because of technical errors in processing online fee payment, the Supreme Court on Monday passed an extraordinary direction under Article 142 that the boy be allotted the seat allocated to him at IIT, Bombay.The Court directed the Joint Seat Allocation Authority (JOSAA) to earmark...

Noting that it would be a great travesty of justice if a young Dalit student is denied IIT seat merely because of technical errors in processing online fee payment, the Supreme Court on Monday passed an extraordinary direction under Article 142  that the boy be allotted the seat allocated to him at IIT, Bombay.

The Court directed the Joint Seat Allocation Authority (JOSAA) to earmark an extra-seat for the student and ordered the parties to act on a certified copy of this order and ensure compliance within 48 hours.

The Court passed the order taking note of the fact that he could not complete the admission due to technical glitches and that if the boy is not accommodated in the current academic year, he would be ineligible to appear hereafter having completed 2 consecutive attempts.

The bench of Justices D. Y. Chandrachud and A. S. Bopanna recorded that the appellant appeared for the JEE main examination in May 2021 and having qualified, he appeared on October 3 for the IIT – JEE advanced 2021 entrance test. The appellant secured an All India Rank of 25,894 and among the students belonging to the scheduled castes, he secured an All India Rank of 864.
On October 15, the Union of India had issued a brochure called the business rules for joint seat allocation for academic programmes offered by the IIT, NIT, and other engineering institutions for 2021 to 2022. Rules provided the procedure for offer of seats and confirmation. On October 27, the appellant was allocated a seat in the civil engineering 4 years BTech degree course at IIT Bombay. The JOSSA portal was open for online reporting for the first round till October 31. The online reporting portal provided for document upload, response by candidates to queries and other features.
On October 29, the appellant logged in to access the JOSSA portal and uploaded the required documents. Unfortunately the acceptance fees could not be paid on 29th October as the appellant has stated that he was short of funds and had to borrow money from his sister on 30 October 2021. Having made the arrangements for funds, the appellant states that he has made about 10 to 12 attempts to complete the payment of the fees but this could not be attained successfully due to technical error on the portal and the server. On 31 October 2021, the appellant made an attempt to finish the payment from the cyber Cafe where the same set of errors appeared. He is stated to have unsuccessfully made calls to the second respondent and followed this up with emails from 31 October 2021 to 1 November 2021.
Based in Uttar Pradesh, the appellant borrowed money to arrange for travel to the office of the second respondent in Kharagpur where the officials expressed their inability to assist him. The division bench of the High Court of Bombay was moved in proceedings under Article 226, seeking a writ for permitting the appellant to pay the acceptance fees and to facilitate his admission into the IIT Bombay. Following an unsuccessful pursuit of his legal rights in the High Court, the appellant approached the Supreme Court.
"This court has been moved by a young Dalit student who is stated to be presently on the verge of losing a valued seat which has been allocated to him at IIT Bombay . The travails of the appellant have taken in from Allahabad, where he is presently studying, to Kharagpur and then to Bombay and eventually to the national capital", said the bench, passing the aforesaid order under Article 142.
The bench added that the Article 142 direction shall not entail disturbing any other student who has already been admitted, and that the supernumerary seat shall be subject to admission of the appellant being regularised in the event that any vacancy falls as a result of exigencies that may arise in the course of the admissions process.
"You are bound to do something, there is no question of exploring options. Right now we are giving you this opportunity, otherwise we will pass an order under Article 142. You better do something for this young man. Look at his background. This is a different case. Don't be wooden like this. He cleared the exam last year, he cleared it this year, he just could not pay the fee in time. Deal with him with a humanitarian approach. You can do everything if it fits you. This is only bureaucracy. Speak to your chairperson and find a way out. You cannot leave him in a lurch", directed Justice Chandrachud at the advocate for the respondent-authorities.
"It is elementary common sense. Which student would get into IIT, Bombay and not pay the Rs. 50,000 fee? It is obvious that he had some financial problems. You have to look at what the reality on the ground is- the reality of our social life", added the judge.
"Don't put up your hands. If we pass a judicial order, it will cause problems for you elsewhere. This is not some case where the student has been negligent or at fault. This is a genuine case", continued Justice Chandrachud.
The bench then passed over the matter until 2 PM, for the advocate to confer with the authorities and come up with a resolution.
Post lunch, the advocate informed the bench that there are no seats available in the entire IITs and that the bench may pass an Article 142 direction so that the petitioner may be accommodated in a supernumerary seat.
He added, "There are other students also who could not pay the fee and hence, their candidature has been rejected. I just wanted to convey this to the Court."
At this, Justice Chandrachud observed, "Then you must have a more robust system.What about students from small villages, small towns where there may not be such banking facilities available with the child? Not everybody would have multiple credit cards! There may be instances of the bank not responding. Some modality is needed to deal with such cases. Students spend years and years preparing. There has to be some buffer for students facing insurmountable hurdles! Otherwise, only children from metropolitan cities would go to IIT."