"Sometimes We Have To Rise Above The Law, He May Rise To Lead The Country In Future": Supreme Court On A Dalit Student's Plea Who Lost IIT Seat Due To Technical Error 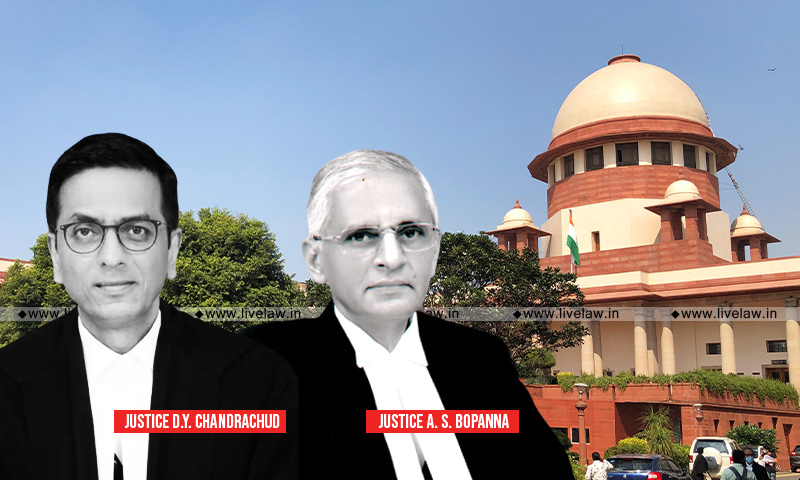 "On humanitarian grounds, sometimes, the Court has to rise above the law", remarked Justice D. Y. Chandrachud on Thursday. The bench of Justices Chandrachud and A S Bopanna was hearing an SLP against a Bombay High Court decision expressing inability to permit the petitioner, a student belonging to the scheduled caste category, to pay, after the deadline, the Seat Acceptance...

"On humanitarian grounds, sometimes, the Court has to rise above the law", remarked Justice D. Y. Chandrachud on Thursday.

The bench of Justices Chandrachud and A S Bopanna was hearing an SLP against a Bombay High Court decision expressing inability to permit the petitioner, a student belonging to the scheduled caste category, to pay, after the deadline, the Seat Acceptance Fees and participate in the admission process, and to direct that he be admitted, to the seat allotted at the IIT, Bombay for Civil Engineering or to any other seat that may be available in any of the Institutes of Technology, in any of the stream.

"Here is a Dalit boy who has made it to the IIT. How many students are able to achieve that? He may rise to lead the country in the next 10 years! Now, he is losing out on his seat for no fault of his. While he may be ousted on a point of law, on humanitarian grounds, sometimes, we have to rise above the law", said Justice Chandrachud.

The bench asked the advocate for the respondent authorities to procure details of the admissions list in IIT, Bombay, and explore the possibility that he could be accommodated.

The bench stated that it shall consider the matter on Monday, clarifying that any relief that it grants would be expressly under Article 142 and would not serve as a precedent.

The Petitioner, who has passed the Joint Entrance Examination (JEE) Advanced 2021 and has scored All India Rank (CRL) 25894 and Scheduled Caste (SC) Rank 864, was allotted seat at the IIT, Bombay for Civil Engineering (4 years, Bachelor of Technology) (B.Tech. Course). It is the case of the Petitioner that pursuant to the Business Rules XVIII Clause 40 for Joint Seat Allocation for the Academic Programs offered by IITs, NITs, IIEST, IIITs and other GFTIs for the academic year 2021-22 issued pursuant to a brochure dated 15/10/2021, Petitioner followed the steps mentioned therein. He firstly accepted the seat under the 'Slide' option for the said academic program and then as step 2 uploaded the required documents as per Annexure-3 on the Joint Seat Allocation Authority ( JoSAA) portal on 29/10/2021. However, he could not make payment of the Seat Acceptance Fees on 29/10/2021 as Petitioner was falling short of money. Thereafter on 30/10/2021 after his sister transferred money into his account, he first attempted to make the payment by online mode at 9.51 p.m. and again at 9.58 p.m. and thereafter again on 31/10/2021 at 11.44 a.m. However, during all these attempts to make the payment, he received a message 'sorry, unable to process request. Please try later' and/or 'the specific request cannot be processed' and another message was 'invalid server access'. It is submitted that though Petitioner was making continuous attempts to make the payment of the said fees, Petitioner was unable to make the said payment due to technical error and server error. In support of his case, the Petitioner has annexed screenshots and access history to the petition. The Petitioner states that he tried to make the Seat Acceptance Fees from 9.51 p.m. on 30/10/2021 and also continued his attempts to make the said payment by visiting Cyber Cafe on 31/10/2021, but he was unsuccessful in doing so. The Petitioner thereafter started contacting JoSAA - Respondent No. 2 through telephone but his calls went unanswered. He addressed email to the Respondent No. 2 requesting for redressal of his grievance (as provided in Rule 77 of Rules of Business) but did not receive any response. The Petitioner submits that thereafter he has physically visited Respondent No. 2 on 1 st November, 2021 in the morning at 09.00 a.m. and requested the officials to accept the Seat Acceptance Fees in any other alternate manner and permit the Petitioner to participate in the admission process, however, the officials of Respondent No.2 expressed their inability to help the Petitioner.

In the impugned order, the High Court noted that the Petitioner has admitted before us that the site of JoSAA set up by the Ministry of Education, Government of India, IIT, Kharagpur, throughout showed that the candidates will be able to access the said process only upto 12.00 noon on 31/10/2021. As set out hereinabove, the Petitioner was also aware of Rule 77 at page 93 of the Petition, which indicates that there is a grievance redressal mechanism available to the candidates in case of any grievance with respect of JoSAA process. It is obvious that the grievance redressal mechanism could be resorted to only upto 12.00 noon of 31/10/2021 when the activity in the said process was to be closed and was in fact closed. The Petitioner despite having failed to make on-line payment right since 9.51 p.m. on 30/10/2021 upto 11.44 a.m. on 31/10/2021 ought to have sought help by registering his grievance as provided in Rule 77 before the activity in the said process was to close i.e. before 12.00 noon on 31st October, 2021. The Petitioner did not register his grievance with regard to his failure to make payment by on-line mode before 12.00 noon but instead registered his grievance on 31/10/2021 after 12.00 noon i.e. after the entire activity / process was finally closed / shut.

"The Petitioner having failed to follow the rules despite being aware of the same now cannot be heard to say that he be allowed to continue his admission and be allowed to make payment of the Seat Acceptance Fee or that he be allotted another seat after the closure of the process of admission as provided for in the Rules. The said Rules are binding on all the participants as the candidates have entered the process by submitting to the said Rules. Though, we are aware that computerization/digitization is not to harass the citizens, but to assist them in going about their activities in a more efficient, convenient and hassle free manner, the Petitioner by not availing of the Grievance Redressal in time, as provided for in the Rules, has entailed the consequence of rejection from the process and has been unfortunately ousted from the process. It is trite that the Rules of business being formulated by the competent authority, in this case JoSAA, are binding on the petitioner. This Court is also fully conscious of the principle highlighted by the Supreme Court in the case of Maharashi Dayanand University (Supra) and followed by the Delhi High Court in the case of Pallavi Sharma (Supra) that a direction of this Court cannot result in an authority violating its own rules and regulations. We therefore cannot and are not issuing any such directions. True also that Petitioner is a poor but meritorious student having secured a merit rank in the JEE Advance and a seat for B.Tech (Civil) course at the prestigious IIT Bombay and we fully sympathise with his situation. However, in view of what we have discussed and observed above we find it difficult to issue any directions to the Respondents as prayed for in this Petition or otherwise", said the High Court.