"The Army May Be Supreme In Its Authority But This Constitutional Court Is Also Supreme In Its Jurisdiction": Supreme Court Warns Army In 'Permanent Commission to Women' Matter 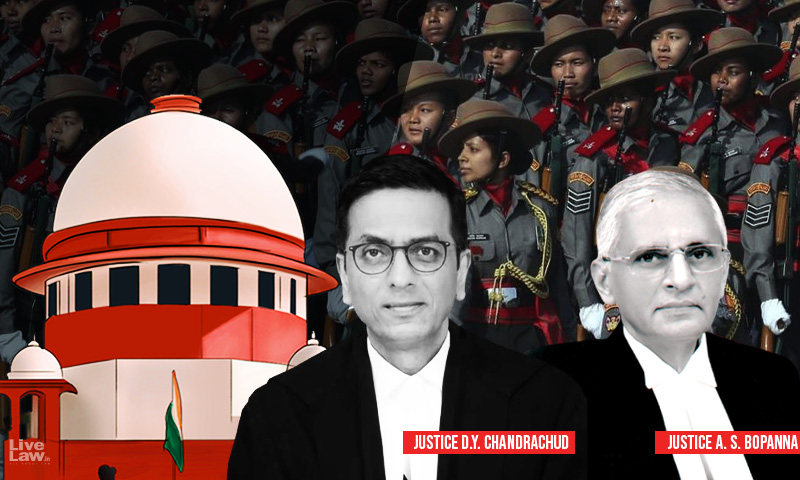 After the Supreme Court made clear its intent to record a finding of contempt against it, the Indian Army on Friday communicated the decision to grant PC within 3 weeks to all women officers (including those who have not approached the court) who meet the criteria stipulated in the March judgment in Lt. Col. Nitisha's case.The bench of Justices DY Chandrachud and AS Bopanna recorded that...

After the Supreme Court made clear its intent to record a finding of contempt against it, the Indian Army on Friday communicated the decision to grant PC within 3 weeks to all women officers (including those who have not approached the court) who meet the criteria stipulated in the March judgment in Lt. Col. Nitisha's case.

The bench of Justices DY Chandrachud and AS Bopanna recorded that as regards the implementation of the directions contained in paragraph 120 of the aforesaid judgment, the present position as relayed by ASG Sanjay Jain and Senior Advocate R. Balasubramanian, for the Ministry of Defence and the Indian Army, is as follows-

(1) Out of the total of 72 WSSCOs (women short service commission officers) who were not considered for PC, 1 has opted for release

(2) Out of the 35 in contempt proceedings before the court, 21, on further review, have been granted PC, while 1 case is being considered on separate grounds

"The ASG states that those officers whose cases are not before the court in these contempt proceedings and who meet the criteria in para 120 would be granted PC in 3 weeks", recorded the bench.

"By way of abundant caution, it is clarified that those women officers who have disciplinary and vigilance clearance in terms of para 120(ii) would be eligible for the grant of PC subject to meeting the medical conditions stipulated in para 120", the bench added.

The Supreme Court had on October 22 directed the Centre to tender a statement in a tabulated form indicating reasons for the denial of permanent commission to 25 women officers, together with an affidavit expressly stating that no reasons independent of the directions issued by the Court have weighed in the grant/refusal of PC to the total 72 petitioners. "In other words, once the final judgment and order of this court has been pronounced, the consideration for the grant of PC has to be confined to the specific directions issued and not be based upon grounds independent of the judgment", the bench had clarified.

"We are holding the army guilty of contempt. We are putting you on guard and we are recording a finding on this. The Army may be supreme in its authority by this constitutional court is also supreme in its jurisdiction. We gave you a very long rope. The reason we had asked you to submit an affidavit that PC has not been denied to any officer on grounds of any consideration other than what we had said in our judgment was to put on notice"

The bench took note of the affidavit filed by Col. P. K. Singh, Ministry Secretary-7 at IHQ, MOD (Army) who had also discharged duty to the Special Selection Board 5 in September 2020; the affidavit contains the tabulated statement.

As the bench commenced dictation of the order, the ASG sought time until after the lunch break to confer with the army authorities.

At 2 PM, the ASG told the bench, "I have explained to the concerned authorities that their interpretation of the directions of the Court is not correct and that the directions have to be complied with. Please don't dictate the order that Your Lordships were earlier. We accept the judgment to be complied as per para 120 and all women officers covered under 120 and who have not been granted PC so far, subject to the limitations in 120, will be granted PC. All WSSCOs who are not before the court but are meeting criteria of para 120 will be granted PC subject to their willingness"

The bench then recorded, "After discussion with the army authorities, the ASG has apprised the court that the judgment in Nitisha's case will be implemented duly observing the directions in para 120 in respect of those officers left out so far from the grant of PC"

"The ASG states that the above dispensation has been arrived at upon instructions, intended to subserve the interests of WSSCOs, who form the subject matter of this court's judgment. We appreciate the fair stance of the army authorities in putting at rest all outstanding issues as regards WSSCOs", the bench added.

The bench also assured Mr. Balasubramanian and the ASG that while editing the order, the bench shall clarify that the instant dispensation pertains only to women officers in terms of the judgment in Lt. Col. Nitisha's case.

The bench headed by Justice D. Y. Chandrachud was hearing the contempt petition at the behest of 72 women officers of the Indian army who have moved the Court claiming that they have been denied Permanent Commission in violation of the March judgment of the Court. In March, another bench headed by Justice Chandrachud had held in Lt. Col. Nitisha's case that all women officers who have satisfied the 60% cut-off are entitled to PC subject to satisfaction of medical criteria as specified and satisfaction of vigilance and disciplinary clearance. It is the contention of the petitioners, that by the results declassified in September this year, it has been revealed that they have been denied PC despite securing above 60%, being medically fit and having vigilance clearance, on account of an additional criteria of "discipline, disobedience of orders, lapses in government procurement, forging medical documents, poor work ethics, lack of professionalism, un-officer like conduct, poor performance in courses etc". It has been urged on behalf of the petitioners that even after the judgment of March, the 72 petitioners have been declared unfit and incompetent for PC and their claim rejected based on a September, 2020 assessment by the Selection Board that had allegedly found charges on the above grounds against the petitioners. It has been pointed out that the Indian Army had sought a clarification from the Supreme Court on the grant of PC to women SSC officers who have allegedly failed this one criteria for this, asking whether the ruling of March meant PC had to be granted irrespective of the criteria being met. The petitioners' senior advocates have submitted that the Supreme Court had in August dismissed the said Miscellaneous Application for clarification, with Justice Chandrachud telling the Centre, "You implement the judgment as it stands. This is an attempt on the part of your client to go around the judgment"

The Supreme Court had on October 8 allowed time until October 22 to the Centre and the Indian Army to resolve the issue of grant of Permanent Commission to those women Short Service Commission officers against whom there is no problem of disciplinary or vigilance clearance. Posting the matter for October 22, the Court required ASG Sanjay Jain, for the Union, and Senior Advocate R. Balasubramanian, for the Indian army, to personally look into the individual cases in view of its March judgment that if the women officers meet the cut-off of 60% marks and clear the medical fitness criteria and have received vigilance and disciplinary clearances, they shall be entitled for PC.

Then on October 22, the Court had also directed that 39 of the aforesaid 72 women officers found eligible, in terms of the judgment of the Court, for the grant of PC on a re-examination personally carried out by ASG Sanjay Jain and Senior Advocate R. Balasubramanian, for the UOI and the Indian Army, be "scrupulously" issued orders granting PC by "Monday week".