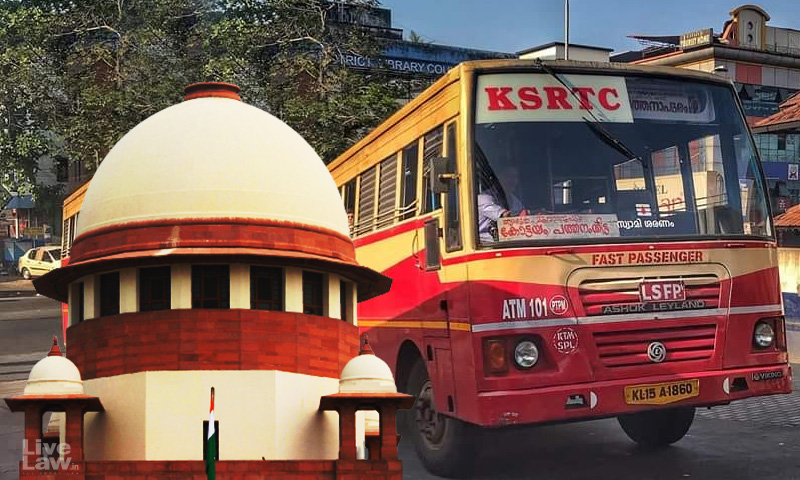 "We will issue notice returnable in 8 weeks. We want to hear this. You (respondents) file counter."

While issuing notice, a Bench comprising Justices S. Abdul Nazeer and Krishna Murari, stayed the operation of the direction of the Division Bench of the High Court relegating the parties to arbitration.

"The direction to the petitioner to avail the remedy of arbitration is stayed."

KSRTC in the present Special Leave Petition filed through Advocate Deepak Prakash assailed the "unreasonable and arbitrary" manner in which the OMCs have hiked price of high speed diesel only for the Corporation to the extent that private transport operators are in a position to purchase diesel at a much lower rate as compared to that of the Corporation. It argued that the order of the Division Bench, in essence, renders the original writ petition pending before the Single Judge infructuous. It also contended that the impugned order directed Corporation to avail the remedy of Arbitration for non-arbitrable issues.

The SLP notes that the Corporation is constrained to approach the Apex Court in order to safeguard public interest and to ensure smooth functioning of the Corporation, which is the only entity discharging essential services of Road transport corporation in the State.

In the impugned order, the Division Bench has been critical of the conduct of the Corporation as it had rushed to the Courts without approaching the OMCs first, with their grievances. It had noted that the Single Judge had granted the final relief sought in the petition as an interim measure, which it reckoned, was not permissible.

On Thursday, Senior Advocate, Mr. Kapil Sibal, appearing for the Corporation apprised the Bench that his client was incurring a loss of Rs. 18 lakh/day in view of the fact that OMCs were selling high speed diesel to it at a higher rate, almost Rs 21 over and above the retail prices.

"What is happening is the Corporation is losing 18 lakhs per day. The retail people are getting petrol at Rs 21 less which means the State cannot compete. They (Division Bench) say go to arbitration. In arbitration we cannot get specific performance of a contract. What do I do? I have to come in a Writ."

"Whatever you are charging the retailers you charge me."

Stating that there were several other diesel companies, Justice Nazeer asked the Corporation to avail their services.

"There are so many diesel/petrol companies, if you don't like this you can go to them."

In order to explain his difficulty, Mr. Sibal submitted -

"I am a bulk purchaser, I cannot go. We are doing public good. We are a public corporation. We are losing 18 lakhs everyday."

Senior Advocate, Mr. Parag Tripathi, appearing on behalf of Indian Oil apprised the Bench that till date they have not picked up even a single litre of diesel at higher price as they have been buying from retail bunks.

Justice Nazeer asked if they were selling at the same rate as the retailers, to which Mr. Tripathi responded in the negative, but provided reason for the same, as under -

"No, they are bulk purchasers so they get 45 days credit and they get certain discounts. They are running by taking diesel from retail bunks at lower prices, instead of our bunks, which is a contractual violation. They are not losing Rs. 18 lakhs each day."

Again, Justice Nazeer asked him, " Is there a difference in the rate in which it is sold to them?"

Mr. Tripathi stated that there is a difference between retail sale and contractual sale. Indian Oil was selling fuel to the Corporation pursuant to the rate agreed upon by both in the contract. He suggested if the Corporation reckons that the rate is not appropriate they are at liberty to terminate the contract.