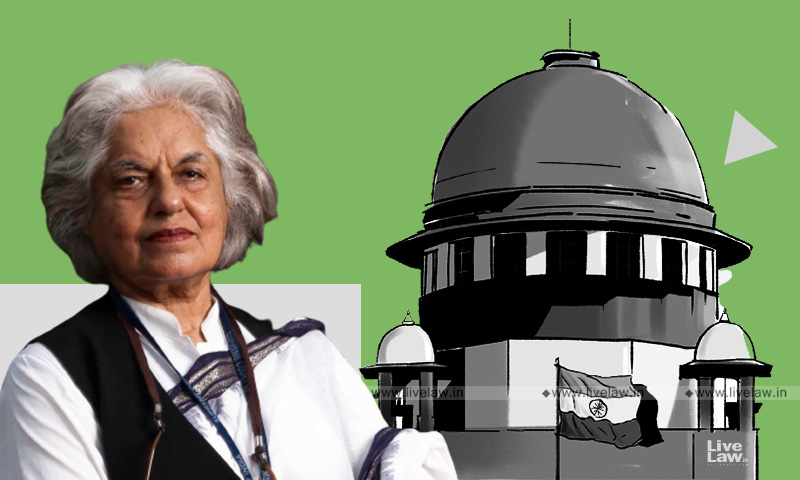 The Supreme Court on Tuesday issued notice on an application filed by Senior Advocate Indira Jaising seeking a declaration that the process adopted by certain High Courts to confer senior designations through the process of secret voting of the full court is "arbitrary and discriminatory".The application has also sought a clarification with regard to the cut-off marks to be obtained by...

The Supreme Court on Tuesday issued notice on an application filed by Senior Advocate Indira Jaising seeking a declaration that the process adopted by certain High Courts to confer senior designations through the process of secret voting of the full court is "arbitrary and discriminatory".

The application has also sought a clarification with regard to the cut-off marks to be obtained by a candidate to be designated as a senior advocate;

At the outset, Senior Advocate Indira Jaising clarified that she hasn't challenged anyone's designation, and her only concern is with regard to the interpretation of the top Court's judgement in the case regarding designation. She added that a clarification from the Court will be helpful to both the Supreme Court and the High Court.

She referred to the following directions from the Court's 2017 judgement in her case in which guidelines were issued for senior designation:

Referring to these directions, Senior Counsel Jaising submitted that we now have an experience of 4 years with regard to how this system has functioned not just in Supreme Court but also in the High Courts.

She submitted that the very idea of giving points was to evaluate a person to be designated as a senior, and the entire heart of the petition filed by her was that voting is a subjective procedure and we need an objective procedure. She pointed out that the Court laid down the guidelines recognising the need for an objective criteria.

"One cannot say it has to be permanent feature, it depends on the kind of numbers that you have, the kind of entire lot before you. If everyone has secured more than 60 marks then you've to go for stricter standards. So therefore committee will certainly evolve", the Bench said.

Senior Counsel Jaising however opined that another way of looking at it would be to have a certain amount of predictability.

Responding to Jaising's submissions, Justice Ravindra Bhat that everything isn't symmetrical and while one batch of Judges can be liberal with the marking, the other batch may be strict.

"One batch of judges may evaluate and be liberal, the other batch may be strict, when we are looking at it, it has to be comparative also. There has to be some consistency. Unlike in a selection where fairness requires you do so before the process begins, this isn't a selection in that sense, its more of a recognition", Justice Bhat said.

Jaising further submitted that the purpose of her petition in her perception was that not enough seniors were being designated. One of the issues that she had raised was that designation of seniors shouldn't become a monopolistic practice. She stated that she had pointed out what happened in United Kingdom where the matter had gone to Competition Commission and the entire process had become transparent.

Senior Counsel Jaising submitted that there is an inherent contradiction in going on the basis of marks and then switching to voting.

Citing examples of Punjab and Delhi, she submitted that people who got the required cut off lost out at the last stage of voting. Therefore the general guideline has come into being that anyone who has to be designated not only needs to have cut off marks but also meet the test of voting.

10 Points Be Granted For 10 Years Experience Followed By One Point for Every Year:Senior Counsel Jaising

With regard to the marking system, Senior Counsel Jaising submitted that 10 points are granted for 10-20 years of practice. She submitted that she has received feedback from lawyers who've informed her that everyone who had an experience of 10-19 years is getting the same marks.

She suggested that for 10 years experience 10 mark can be granted and then every additional year of service may be rewarded with one mark.

The present application filed through Advocate Anindita Pujari has sought a direction  that advertisements inviting applications are issued periodically twice a year as laid down by the Supreme Court.

The application has pointed out that recently the High Courts of Delhi and Punjab & Haryana resorted to voting process to confer senior designations. Such voting was done even after marks were assigned to the candidates by the Committee of the High Courts based on the "objective criteria" formulated by the Supreme Court in the 2017 judgment in the case Indira Jaising vs Supreme Court of India.

The voting process by the full court, Jaising argues, defeats the objective and purpose of the 2017 judgment of the Supreme Court which highlighted the need to limit the element of subjectivity in senior designations.

To illustrate her point, the senior counsel refers to the process adopted by the Delhi High Court in conferring 55 senior designations. 87 advocates had cleared the cut-off set by the Committee based on the objective criteria. However, these names were again subjected to a secret voting process of the full court, which resulted in exclusion of 32 candidates.

In this context, Jaising's application says :

The application is moved in the writ petition filed by her in 2015 which resulted in the 2017 judgment laying down objective criteria for senior designations. A miscellaneous application has also been filed regarding effective implementation of court's 2017 judgement on senior designation, on which the Court had earlier issued notice.

Therefore, she is seeking a clarification that voting by "secret ballot" on each candidate for senior designation is arbitrary, discriminatory and contrary to the judgment in Indira Jaising vs Supreme Court of India and others.

The 2017 judgment on objective criteria for senior designations was delivered by a bench comprising Justices Ranjan Gogoi, RF Nariman and Navin Sinha in the writ petition filed by Indira Jaising.

The judgment suggested objective criteria such as:

The Supreme Court also contemplated test of personality and suitability on the basis of interview / interaction.Following the Supreme Court judgment, several High Courts framed rules on the process for senior designation.