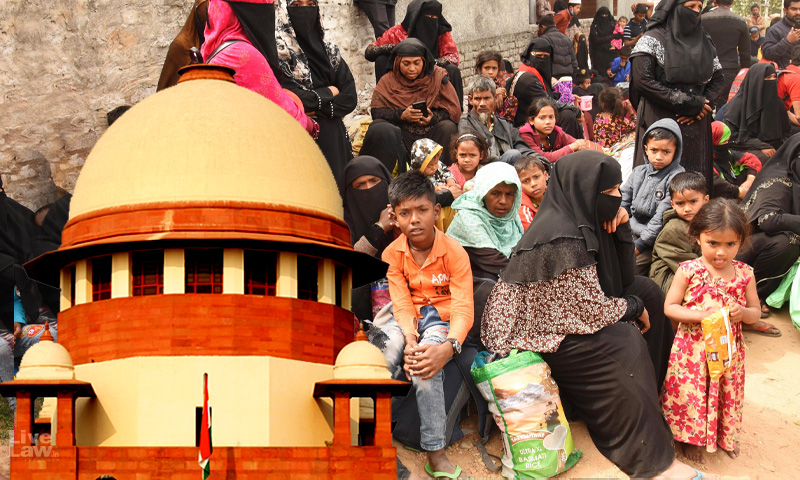 The Supreme Court on Friday issued notice on a PIL filed by BJP leader and Advocate Ashwini Upadhyay, seeking immediate steps for deportation of all illegal immigrants and infiltrators, including Bangladeshis and Rohingyas. A Bench comprising of CJI SA Bobde and Justices AS Bopanna and V. Ramasubramanian has tagged the plea with a writ petition field by Mohammed Salimullah in...

The Supreme Court on Friday issued notice on a PIL filed by BJP leader and Advocate Ashwini Upadhyay, seeking immediate steps for deportation of all illegal immigrants and infiltrators, including Bangladeshis and Rohingyas.

A Bench comprising of CJI SA Bobde and Justices AS Bopanna and V. Ramasubramanian has tagged the plea with a writ petition field by Mohammed Salimullah in 2017, against deportation of Rohingya refugees who have been detained in Jammu.

It may be noted that the Supreme Court has reserved orders in the said matter.

In the instant petition, Upadhyay seeks directions to the Central and State Governments to identify, detain and deport all illegal immigrants, including Bangladeshis and Rohingyas within one year.

"Under the Foreigners Act, 1946 and in exercise of the powers contained therein, the Central Government and State Governments must take concrete steps to detect and deport illegal immigrants," the plea states.

It is alleged that large-scale illegal migrants, particularly from Myanmar and Bangladesh, have threatened the demographic structure of bordering districts of India and have seriously impaired the security and national integration.

In this context, it refers to the 175th Report of the Law Commission, noting that entry of illegal migrants into India poses a grave threat to its democracy as well as its security, especially in Jammu and Kashmir and the eastern States.

In its report, the Law Commission had observed that influx of migrants from Bangladesh has remained unabated and has acquired "frightening proportions".

In his plea, Upadhyay states that such large-scale influx of illegal immigrants has led to large tracts of sensitive international borders being occupied by foreigners.

"This has not only serious implications for our internal security, but also infringes upon right to life and liberty of Indian Citizens guaranteed under the Article 21," the plea states.

It further highlights the plight of bordering districts of Assam, West Bengal, Meghalaya, Mizoram and Tripura, that have recorded growth of population higher than the national average.

"The unabated influx of illegal migrants… threatens to reduce the Assamese people to a minority in their own State, as happened in Tripura and Sikkim…There is a tendency to view illegal migration into Assam as a regional matter affecting only the people of Assam. It's more dangerous dimensions of greatly undermining our national security, is ignored," the plea quotes from a report submitted to the Union Government by then Governor of Assam in 1998.

The plea goes on to state that many Rohingyas indulge in anti-national activities such as mobilization of funds through hawala channels, procuring fake Indian identity documents for other Rohingyas and human trafficking.

It is contended that many of them have even managed to acquire fake/fraudulently obtained Indian identity documents i.e. PAN Card and voter cards.

Thus, it is urged that stern action be taken against such travel agents, government employees & other such people, who directly/indirectly provide PAN Card, AADHAR Cards, Ration Cards, Passport and Voter Cards to illegal immigrants and infiltrators.

The Petitioner has also sought a direction to the Government authorities to amend the respective laws to make illegal migration and infiltration, a cognizable non-bailable and non-compoundable offence.

The petition is filed through Advocate RD Upadhyay.