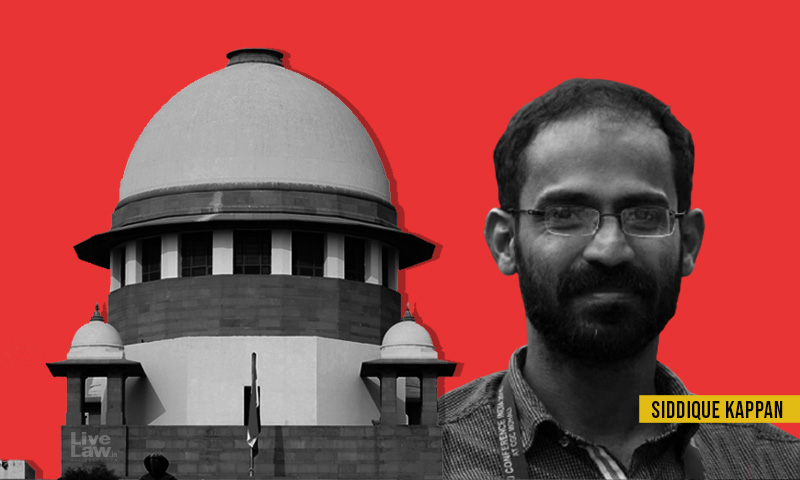 The Supreme Court on Monday issued notice on the petition filed by Kerala journalist Siddique Kappan, challenging the rejection of his bail application in Hathras Conspiracy case by the Allahabad High Court.

The bench comprising Chief Justice of India U.U. Lalit and Justice S. Ravindra Bhat has posted the case for final disposal on September 9.

Kappan, who has now spent almost two years behind bars, was arrested, along with other accused by the UP police in October 2020 while they were proceeding to report the Hathras rape-murder crime. While initially he was arrested under the apprehension of causing a breach of peace, subsequently, he was booked under the UAPA alleging that him and his co-passengers were trying to incite communal riots and disrupt social harmony in the wake of the Hathras gangrape-murder case.

"The heart of the allegation is that that PFI put 45,000 for terrorist activities. No evidence, no nothing, just allegations," Senior Advocate Kapil Sibal appearing for Kappan submitted.

"PFI is not a terrorist organization. PFI is not a banned organization. I am a journalist. I was going to Hathras to cover the case. What has happened is that I was working with a newspaper with PFI. I don't work there any more."

The petition was opposed by Additional Advocate General of the State of UP Garima Prashad who apprised the Court that there are 8 accused in the matter whereas some of them are also accused in the Delhi riots case.

"Not me," Sibal responded for Kappan.

The CJI then told Prashad to file her objections in the matter by placing on record a counter-affidavit.

On August 23, Kappan's co-accused cab driver Mohammad Alam, was enlarged on bail by the High Court. It was observed in the bail order that "incriminating material" was recovered from Kappan's possession but, no such material was recovered from Alam.

In the Special Leave Petition filed through Advocate Pallavi Pratap, Kappan had submitted that the intention of his visit was to discharge his professional duty of reporting on the infamous case of the Hathras rape/murder. However, he was taken into custody on the basis of "trumped up" charges.