IT Rules 2021 : Supreme Court To Hear Centre's Challenge Against Interim Orders Of High Courts On July 19 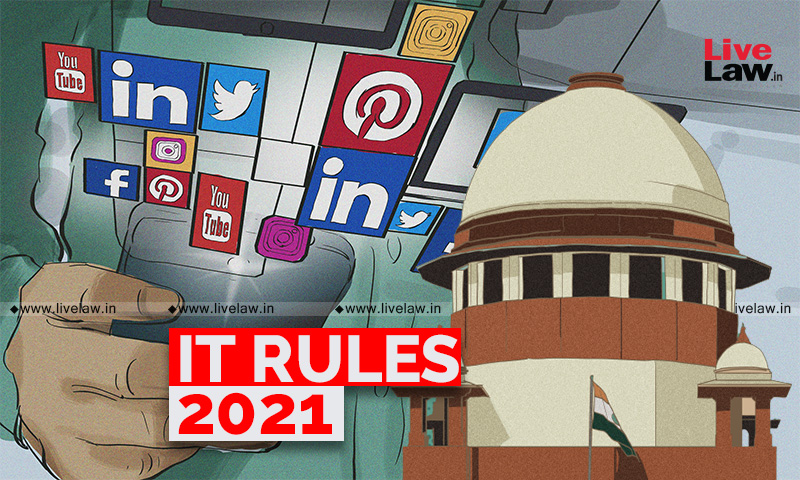 The Supreme Court on Thursday posted to July 19 the hearing of the Centre's petitions challenging the interim orders passed by High Courts staying some provisions of the Information Technology (Intermediary Guidelines and Digital Media Ethics Code) Rules, 2021 (IT Rules, 2021).

The Centre has also filed petitions to transfer the cases in the High Courts to the Supreme Court. The Court had previously stayed the further proceedings in the petitions before the High Courts.

As regards the Centre's plea to vacate the interim orders granted by the High Courts, the Court said that it requires hearing of the other side.

Solicitor General Tushar Mehta submitted before the bench of Justices A. M. Khanwilkar, A. S. Oka and J. S. Pardiwala :"We wanted an interim order in SLPs where the rules have been stayed. But that will need hearing...".

At this, Justices Khanwilkar said, "That will have to be heard. The further proceedings before the High Courts are stayed...".
The SG advanced, "Yes, Your Lordships. We are seeking a stay where a stay of the Rules is granted. But that requires hearing. That is why we are not troubling your lordships today."
The SG had explained the IT Rules issue as follows-
"Under the rulemaking power, the regulation-making power under the information technology act, the central government has come out with digital media discipline rules. There are three kinds of media- we have print, electronic like television etc, and the third is digital. Print has a separate regulatory mechanism. The electronic has cable TV networks etc. For Digital, the central government has come out with statutory regulations broadly providing for a mechanism where there is a 3 tier system- every digital media platform will have its own in-house mechanism if there is any complaint by the reader or viewer because digital media has audiovisual and written content. That is the first tier. The 2nd tier is that suppose you are running a digital/web magazine, then the industry must have their own internal mechanism, say, a magazine Association- like the broadcasters Association we have in electronic media. All digital mediums of similar nature will have one internal mechanism headed by a former judge of this court. The third tier is an inter-ministerial group, from the Ministry of IT, Electronics, Home, with outsiders to assist that ministry. That ministry has certain powers to censure, to tell them that you publish an apology or publish disclaimer etc. That is the third and severest mechanism which goes to the extreme step. That is the recommendatory body, the power will be exercised by the central government under whatever provision the facts of the case justify. Those rules are challenged before various High Courts. The Bombay High Court has stayed the rules. Other High Court has said rules may operate but no coercive action may be taken. So as regards IT Rules, there are two sets of matters before this Court- one, transfer petitions that every thing may be decided here to which your lordships on the last occasion agreed. The second is SLPs against those orders- that the High Court, in our submission, ought not to have stayed the rules".
At the previous hearing on May 9, the court had recorded that Mr. Tushar Mehta, Solicitor General had assured to prepare chart of cases involving: (1) Challenge to I.T. Rules; (2) Challenge to Cable T.V. Rules; (3) Petitions generally seeking directions for evolving mechanism which would be touching upon the subject matter of I.T. Rules; and (4) other set of cases involving instances of hate speeches and hate crimes. The Court had on May 9 directed that the concerned set of cases be listed separately on the next date, to be proceeded sequentially.
On Thursday, the bench indicated to the SG the office report which stated that "the requisite chart classifying the cases has not been furnished by the Counsel for the Union of India in pursuance of the above order, so far". The SG told the bench that the chart had been mailed to the Registry and also shared with the opposite side, but if it has not been received, an updated chart will be sent to the Registry immediately. The bench told the SG to "identify which case will fall under which of the four categories so that each is listed a separate item and there is no confusion", asking the SG to "give a chart to the registry as regards the same".
The bench passed the following order- "We have perused the office report. The SG submits that the chart has already been mailed to the registry. He has furnished one more set for the perusal of the court across the bar". The bench directed the cases under item (1) in the May 9, 2022 order to be listed separately on 19th July. The bench noted that the cases under Item (3) will have to be disposed off in view of the Rules in Item 1 as those rules are there. (2) which comprises the challenge to cable TV rules is directed to be listed separately on 20th of July. Cases under hate speech and hate crime are to be listed on 21st July.
Background

On September 2, 2021, a bench led by the Chief Justice of India had directed the listing of the petitions relating to IT Rules after 6 weeks, on a request made by the SG.