Conviction Or Acquittal Cannot Be Set Aside Merely Because There Was A Possibility Of A Joint Or Separate Trial: Supreme Court Formulates Principles 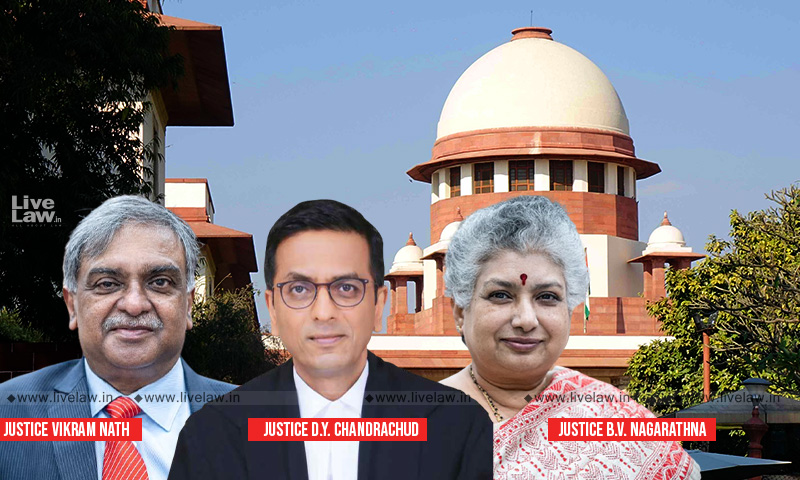 The Supreme Court observed that a conviction or acquittal of the accused cannot be set aside on the mere ground that there was a possibility of a joint or a separate trial.

To set aside the order of conviction or acquittal, it must be proved that the rights of the parties were prejudiced because of the joint or separate trial, the bench of Justices DY Chandrachud, Vikram Nath and BV Nagarathna observed.

The bench was considering an appeal against a judgment of the High Court of Punjab and Haryana which in a batch of nine criminal appeals remitted the orders of acquittal and conviction arising out of two separate FIRs [one on rape and another for abetment of suicide] for fresh trial and directed that the proceedings arising out of both the FIRs be clubbed together under Section 223 CrPC and be tried together by one court.

In appeal, the Apex Court, referring to various earlier judgments, the court formulated the following principles in the matter of retrial, joint and separate trials:

(i) Section 218 provides that separate trials shall be conducted for distinct offences alleged to be committed by a person. Sections 219 - 221 provide exceptions to this general rule. If a person falls under these exceptions, then a joint trial for the offences which a person is charged with may be conducted. Similarly, under Section 223, a joint trial may be held for persons charged with different offences if any of the clauses in the provision are separately or on a combination satisfied;

(iii) The possibility of conducting a joint trial will have to be determined at the beginning of the trial and not after the trial based on the result of the trial. The Appellate Court may determine the validity of the argument that there ought to have been a separate/joint trial only based on whether the trial had prejudiced the right of accused or the prosecutrix;

(iv) Since the provisions which engraft an exception use the phrase 'may' with reference to conducting a joint trial, a separate trial is usually not contrary to law even if a joint trial could be conducted, unless proven to cause a miscarriage of justice; and

(i) The Appellate Court may direct a retrial only in 'exceptional' circumstances to avert a miscarriage of justice;

(ii) Mere lapses in the investigation are not sufficient to warrant a direction for retrial. Only if the lapses are so grave so as to prejudice the rights of the parties, can a retrial be directed;

(iii)A determination of whether a 'shoddy' investigation/trial has prejudiced the party, must be based on the facts of each case pursuant to a thorough reading of the evidence;

(v) If a matter is directed for re-trial, the evidence and record of the previous trial is completely wiped out; and

(vi) The following are some instances, not intended to be exhaustive, of when the Court could order a retrial on the ground of miscarriage of justice : a) The trial court has proceeded with the trial in the absence of jurisdiction; b) The trial has been vitiated by an illegality or irregularity based on a misconception of the nature of the proceedings; and c) The prosecutor has been disabled or prevented from adducing evidence as regards the nature of the charge, resulting in the trial being rendered a farce, sham or charade

The Additional Sessions Judge, Patiala convicted (i) Balwinder Singh; (ii) Gurpreet Singh alias Aman; (ii) Shinderpal Pal Kaur; and (iv) Sandeep Singh in the trial arising out of FIR 96 of 2012 while Nasib Singh was acquitted. The same judge separately tried the case arising out of other FIR and convicted the three accused but acquitted Nasib Singh. In appeals filed by convicts and the mother of the prosecuterix, the High Court ordered retrial.

Examining the facts of this case, the Apex court observed that the parties have not been able to demonstrate before the Court that separate trials led to a miscarriage of justice.

The court therefore restored the entire batch of criminal appeals to the file of the High Court for disposal afresh on merits.