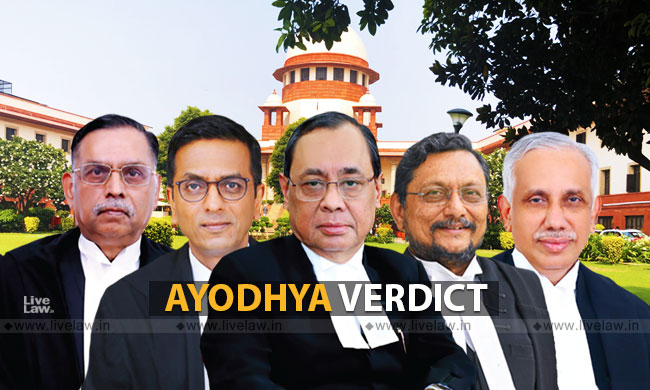 The Five judge bench of the Supreme Court has pronounced the judgment in Ayodhya case today.

The court has held that the entire disputed land of 2.77 acres in Ayodhya must be handed over for the construction of Ram Mandir. At the same time, the Court held that an alternate plot of 5 acres must be allotted to the Sunni Waqf Board for construction of mosque. The Court observed that the destruction of Babri mosque in 1992 was a violation of law. The Central Government has been directed to formulate a scheme in this regard within three months. A Board of Trustees must be set up for construction of temple.

The following are the key observations made in the 1045 page long unanimous judgment.

The court observed that suits filed by Sunni Central Waqf Board and the the deity Bhagwan Shri Ram Virajman will have to be decreed and the relief moulded in a manner which preserves the constitutional values of justice, fraternity, human dignity and the equality of religious belief.

The suit filed by the deity Bhagwan Shri Ram Virajman through a next friend for a declaration of title to the disputed premises and to restrain the defendants from interfering with or raising any objection to the construction of a temple has been decreed as follows:

Directions regarding Alternate Site For Mosque

Simultaneously, with the handing over of the disputed property to the Trust or body under clause 2 above, a suitable plot of land admeasuring 5 acres shall be handed over to the Sunni Central Waqf Board, the plaintiff in Suit 4.

The land shall be allotted either by: (a) The Central Government out of the land acquired under the Ayodhya Act 1993; or (b) The State Government at a suitable prominent place in Ayodhya; The Central Government and the State Government shall act in consultation with each other to effectuate the above allotment in the period stipulated.
The Sunni Central Waqf Board would be at liberty, on the allotment of the land to take all necessary steps for the construction of a mosque on the land so allotted together with other associated facilities;
Suit 4 shall stand decreed to this extent in terms of the above directions;
The directions for the allotment of land to the Sunni Central Waqf Board in Suit 4 are issued in pursuance of the powers vested in this Court under Article 142 of the Constitution

There is clear evidence to indicate that the worship by the Hindus in the outer courtyard continued unimpeded in spite of the setting up of a grill-brick wall in 1857. Their possession of the outer courtyard stands established together with the incidents attaching to their control over it.

As regards the inner courtyard, there is evidence on a preponderance of probabilities to establish worship by the Hindus prior to the annexation of Oudh by the British in 1857. The Muslims have offered no evidence to indicate that they were in exclusive possession of the inner structure prior to 1857 since the date of the construction in the sixteenth century

Three-way bifurcation by the High Court was legally unsustainable

Three-way bifurcation by the High Court was legally unsustainable. Even as a matter of maintaining public peace and tranquillity, the solution which commended itself to the High Court is not feasible. The disputed site admeasures all of 1500 square yards. Dividing the land will not subserve the interest of either of the parties or secure a lasting sense of peace and tranquillity

On Allotment of alternate land to Muslims

The allotment of land to the Muslims is necessary because though on a balance of probabilities, the evidence in respect of the possessory claim of the Hindus to the composite whole of the disputed property stands on a better footing than the evidence adduced by the Muslims, the Muslims were dispossessed upon the desecration of the mosque on 22/23 December 1949 which was ultimately destroyed on 6 December 1992. There was no abandonment of the mosque by the Muslims. This Court in the exercise of its powers under Article 142 of the Constitution must ensure that a wrong committed must be remedied. Justice would not prevail if the Court were to overlook the entitlement of the Muslims who have been deprived of the structure of the mosque through means which should not have been employed in a secular nation committed to the rule of law. The Constitution postulates the equality of all faiths. Tolerance and mutual co-existnce nourish the secular commitment of our nation and its people.

'Asthan Shri Ram Janam Bhumi' is not a juristic person

The law has till today yet to accept the conferral of legal personality on immoveable property. Religiosity has moved hearts and minds. The court cannot adopt a position that accords primacy to the faith and belief of a single religion as the basis to confer both judicial PART K 224 insulation as well as primacy over the legal system as a whole. From Shahid Gunj to Ayodhya, in a country like ours where contesting claims over property by religious communities are inevitable, our courts cannot reduce questions of title, which fall firmly within the secular domain and outside the rubric of religion, to a question of which community's faith is stronger.

In the present case, the first plaintiff has been the object of worship for several hundred years and the underlying purpose of continued worship is apparent even absent any express dedication or trust. The existence of the idol is merely a question of form, or corpus, and the legal personality of the first plaintiff is not dependent on the continued existence of the idol. At the heart of the present dispute are questions pertaining to the rightful manager of the deity and the access of the devotees of Lord Ram to the idols. To ensure the legal protection of the underlying purpose and practically adjudicate upon the dispute, the legal personality of the first plaintiff is recognised.

Deity is not a perpetual minor for the purpose of limitation

On the issue raised whether a deity can be regarded as a perpetual minor, the bench agreed with observations in the judmgnent of Justice S U Khan that an idol of a deity is not a perpetual minor for the purpose of limitation and debutter property can be lost through adverse possession.

The analysis of the legal position on the applicability of the law on perpetual minority by Justice S U Khan commends itself. Based on the judicial precedents analysed above, it is an established position that a deity cannot on the ground of being a perpetual minor stand exempted from the application of the Limitation Act. The submission which was urged by Mr C S Vaidyanathan is contrary to the jurisprudence of close to a century on the issue. We follow the line of precedents emanating from the Privy Council, this Court and several High Courts noted earlier. The applicability of the law of limitation cannot be ruled out on the basis of the theory of perpetual minority.

Suit By Deity Within Period of Limitation

Simply put, Suit 5 contains a plea that by virtue of the deity not being a party to the earlier suits, its interests and concerns were not being adequately protected in the earlier suits including those instituted by the Hindu parties. The reasons which weighed with Justice Agarwal in holding Suit 5 to be within limitation, to the extent summarised above, commend themselves for acceptance. On the basis of the above discussion, it must be held that Suit 5 is instituted within the period of limitation.

Some key qoutes from the judgment :

"The underlying structure which provided the foundations of the mosque together with its architectural features and recoveries are suggestive of a Hindu religious origin comparable to temple excavations in the region and pertaining to the era."

"No evidence has been placed on the record in relation to the course of human history between the twelfth and sixteen centuries. No evidence is available in a case of this antiquity on (i) the cause of destruction of the underlying structure; and (ii) whether the pre-existing structure was demolished for the construction of the mosque."

"The submission that the mosque did not accord with Islamic tenets stands rejected. The evidence indicates that there was no abandonment of the mosque by Muslims. Namaz was observed on Fridays towards December 1949, the last namaz being on 16 December 1949"

"The damage to the mosque in 1934, its desecration in 1949 leading to the ouster of the Muslims and the eventual destruction on 6 December 1992 constituted a serious violation of the rule of law"

"The Hindus have established a clear case of a possessory title to the outside courtyard by virtue of long, continued and unimpeded worship at the Ramchabutra and other objects of religious signficance. The Hindus and the Muslims have contested claims to the offering worship within the three domed structure in the inner courtyard."

"The exclusion of the Muslims from worship and possession took place on the intervening night between 22/23 December 1949 when the mosque was desecrated by the installation of Hindu idols. The ouster of the Muslims on that occasion was not through any lawful authority but through an act which was calculated to deprive them of their place of worship."

"During the pendency of the suits, the entire structure of the mosque was brought down in a calculated act of destroying a place of public worship. The Muslims have been wrongly deprived of a mosque which had been constructed well over 450 years ago"

"The allotment of land to the Muslims is necessary because though on a balance of probabilities, the evidence in respect of the possessory claim of the Hindus to the composite whole of the disputed property stands on a better footing than the evidence adduced by the Muslims, the Muslims were dispossessed upon the desecration of the mosque on 22/23 December 1949 which was ultimately destroyed on 6 December 1992.

"There was no abandonment of the mosque by the Muslims. This Court in the exercise of its powers under Article 142 of the Constitution must ensure that a wrong committed must be remedied. Justice would not prevail if the Court were to overlook the entitlement of the Muslims who have been deprived of the structure of the mosque through means which should not have been employed in a secular nation committed to the rule of law."

"While determining the area of land to be allotted, it is necessary to provide restitution to the Muslim community for the unlawful destruction of their place of worship"

"Having weighed the nature of the relief which should be granted to the Muslims, we direct that land admeasuring 5 acres be allotted to the Sunni Central Waqf Board either by the Central Government out of the acquired land or by the Government of Uttar Pradesh within the city of Ayodhya."

"Possession of the inner and outer courtyards shall be handed over to the Board of Trustees of the Trust or to the body so constituted."