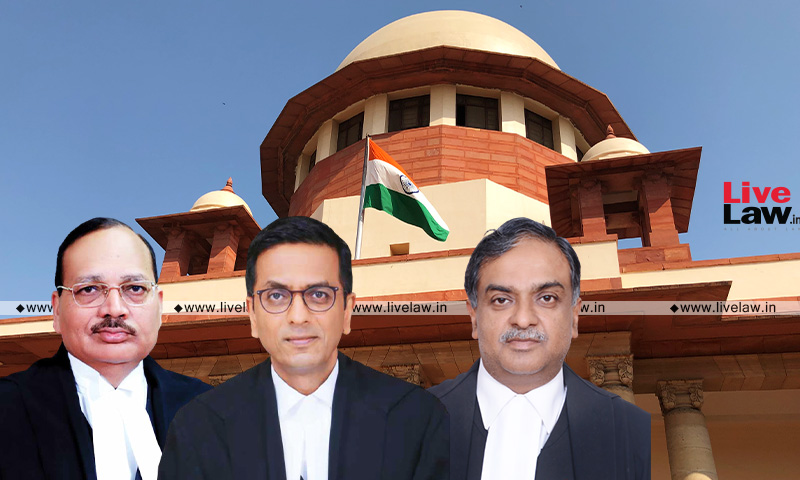 The Supreme Court on Wednesday granted 3 weeks' time to the Union of India for a "radical rethink in terms of infrastructural requirements of the judiciary" and for deliberating on a mechanism for monitoring allocation of funds by the Centre and the States, the disbursal of these funds and their utilisation.The bench of Justices D. Y. Chandrachud, Surya Kant and Vikram Nath was hearing...

The Supreme Court on Wednesday granted 3 weeks' time to the Union of India for a "radical rethink in terms of infrastructural requirements of the judiciary" and for deliberating on a mechanism for monitoring allocation of funds by the Centre and the States, the disbursal of these funds and their utilisation.

The bench of Justices D. Y. Chandrachud, Surya Kant and Vikram Nath was hearing the Imtiyaz Ahmad v. State of UP matter, and deliberating on the issue of judicial infrastructure and judge strength primarily at the state and district level across the country. The Supreme Court had in July called for the responses of all High Courts to the suggestions and recommendations of the National Court Management Systems Committee(NCMSC) on the aspects of judge strength, case load and infrastructure.
"Why don't you think of constituting a sort of council on judicial infrastructure. We are least interested in retaining control of the council. The benefit of having a senior judge or Chief Justice on it would be that they are in the know of things. The composition can be of the Union Minister for Law and Justice, the Secretary, Finance etc. The states can also be given representation- the state finance Minister, the state finance Secretary or the chief secretary of the state so that in relation to each state, the Union of India can then take up what is the devolution of funds to ensure that the state's contribution also comes into the coffers and these funds are actually made available to the High Court. It can also monitor the progress of the use of the funds", said Justice Chandrachud to ASG K. M.Nataraj.
Continuing, Justice Chandrachud observed, "You must create a mechanism where the states are also involved but which does not leave it to individual High Courts to start using their good offices with the governments for seeking funds. There has to be a more systemised monitoring mechanism at the Centre for making available funds, for the dispersal of funds. You can also postulate a mechanism for the creation of judicial infrastructure- Not only for ensuring that funds are released to the high courts for the state judiciary, but we need a proper mechanism for developing judicial infrastructure. We are not saying that you should keep on funding and the judges would be in charge. The mission is to make it efficient. Of course, because they are the consumers of the infrastructure, they work in those institutions, judge know what is needed"
"Ensure that you call a meeting where you are apprised by the State finance secretaries of what is the status of the disbursement of the funds that have been allocated- Your 60% share and the state's 40% share. The allocation, the disbursement and the utilisation in each state. We would like to know for every state what is the extent of the allocation, what is the amount allocated to the states and transferred to the states by the central government, what is the extent of dispersal by the states of the state funds and out of the Central-allocated funds to the High Courts, for the state judiciary, and what is the deficit. We want to ascertain the facts state -wise. Hold a meeting of the state finance ministers and the law secretaries. They will give you a clear indication of what the position is. Ascertain it from the High Courts through the registrars-general", the judge put to the ASG.