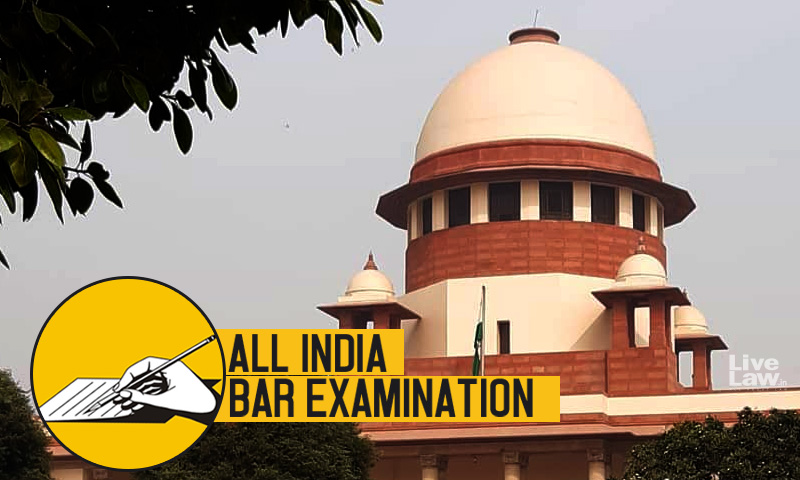 A Constitution Bench of the Supreme Court on Tuesday while hearing a batch of petitions challenging the validity of the All-India Bar Examination, considered the issue of fairly remunerating junior advocates. The five-judge Bench comprised Justices Sanjay Kishan Kaul, Sanjiv Khanna, A.S. Oka, Vikram Nath, and J.K. Maheshwari. The Court is being assisted by the Attorney-General of India and...

A Constitution Bench of the Supreme Court on Tuesday while hearing a batch of petitions challenging the validity of the All-India Bar Examination, considered the issue of fairly remunerating junior advocates.

The Court, led by Justice Kaul, enquired whether the "optimal strength" of the bar had been examined in light of considerations such as the pendency of cases and the number of lawyers required. Justice Kaul noted –

"There has never been a study on how many lawyers the country needs. Many lawyers are out of work. Looking at the pendency, what is the optimal strength? If the work is done reasonably, how many lawyers do we need to assist the system. That should be studied. The exam should be fine-tuned on the basis of our needs in India. All other exams have negative marking so that someone does not get marks on a fluke. In the legal profession, is it needed to have such a lenient exam? This study will help fine-tune the exam."

As a sequitur, he observed that the study would help in alleviating the financial difficulties faced by many lawyers, alluding to the gap between the demand and supply of legal practitioners in the country. The Attorney-General concurred, citing a letter received by him from lawyers from Jammu and Kashmir who were allegedly made to work for senior advocates without being paid. Venugopal mused –

"How to incentivise seniors to provide juniors with a reasonable means of sustenance, that is the question."

Justice Kaul clarified that this was taken up in "another matter". Nevertheless, lamenting the loss of "bright people" in the profession because of a paucity of financial resources, he noted –

"For people coming from such backgrounds, after studying for six years, it becomes difficult to sustain themselves for another four to five years…I have also seen situations where the Senior Advocate charges money to take on juniors."

The Chairman of the Bar Council of India and Senior Advocate Manan Kumar Mishra also informed the Court that during the outbreak of the COVID-19 pandemic, many lawyers found it difficult to meet their basic needs because they had no work. Rations had to be provided to them, Mishra said. The Attorney-General also pointed out that the situation was especially dire in the case of lawyers practising in the district and taluka courts. On the issue of young lawyers being paid low stipends, Vishwanathan, who started his career as a junior in Venugopal's chambers, pointed out –

"We were lucky that way. Mr Venugopal was very particular that salaries had to be paid on the first of every month. We used to get a green cheque."

Later in the discussion, it was suggested that rules relating to the training of lawyers should be framed. Justice Kaul noted that for some lawyers, especially from impoverished and rural families, it would be difficult to find a mentor willing to take them on. Another consideration was the payment of a stipend. The Court cautioned that even if seniors agreed to impart training, the financial liability for paying the lawyers could not be borne by the Bar Council of India. Justice Kaul observed –

"Even if there is a constitutional interpretation, this problem will persist if we don't address this issue. Even if BCI helps the students be placed, the payment of the stipend is an issue. If we stretch ourselves, in construing that the power to frame such a rule exists, the implementation itself will become a problem. If the suggestion is to have compulsory training, then the issue of paying the stipend becomes a real problem."

"It is not compulsory, there has to be an incentive structure. If we say your designation will depend on this, lawyers will take juniors and pay the stipend."

"On a lighter note, the designation issue has become more complex than elevation."

Similar submissions relating to the payment of fair remuneration were canvassed before the Supreme Court in Bar Council of India v. Twinkle Rahul Mangaonkar & Ors. [2022 SCC OnLine SC 1055]. The Twinkle Mangaonkar Bench was also led by Justice Kaul and assisted by Vishwanathan. Recently, a Division Bench of the Delhi High Court in Pankaj Kumar v. Bar Council of India & Ors. [2022 LiveLaw (Del) 902] has appealed to the seniors in the legal profession to ensure that the stipend paid to their juniors is enough for them to overcome financial stress and lead a more dignified life.