Only In Indian Supreme Court Can One Come Against Procedural Direction At Interim Stage,Won't Happen In SCOTUS: SC 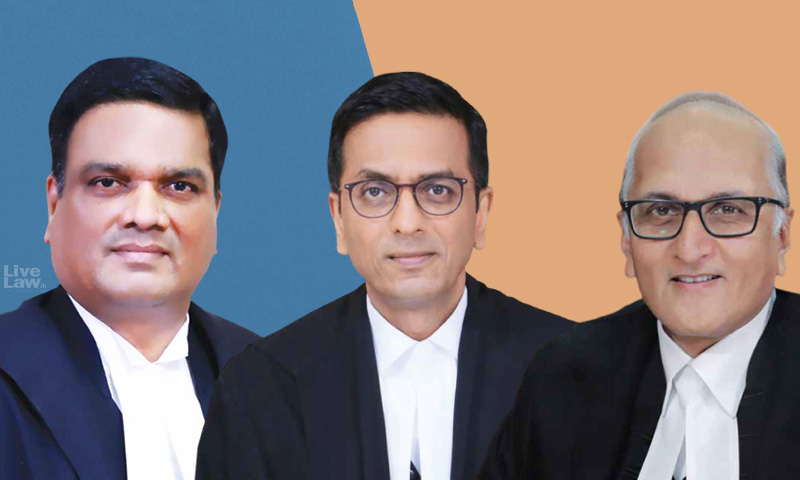 "It is only in the Supreme Court of India that one can come against a procedural direction passed by a Single Judge at an interim stage. Such a thing would not happen in the US Supreme Court", remarked Justice D. Y. Chandrachud on Tuesday.This was in connection with the challenge to the view taken by a Delhi High Court Single Judge that a suit for trademark infringement between different wings...

"It is only in the Supreme Court of India that one can come against a procedural direction passed by a Single Judge at an interim stage. Such a thing would not happen in the US Supreme Court", remarked Justice D. Y. Chandrachud on Tuesday.

This was in connection with the challenge to the view taken by a Delhi High Court Single Judge that a suit for trademark infringement between different wings of science and technology giant Merck may proceed to be decided based on the material on record, without immediately recording any further evidence, and that the question whether any evidence is to be recorded would be determined after hearing the advocates finally. In the impugned order, Justice Rajiv Sahai Endlaw had taken a view that final hearing in the matter will take place based on the admitted documents already placed on record and if and when evidence is required to be taken, a call in that behalf will be taken at the appropriate stage.
The bench of Justices Chandrachud, R. Subhash Reddy and Ravindra Bhat was considering an SLP by Merck Sharp & Dohme and others (defendants before the High Court) arising out of a November 12, 2020 order of the Delhi High Court on its Interlocutory Application for cross-examination of the technical expert of the plaintiff (Merck KGAA; respondent no. 1 in the SLP) and for tendering into evidence affidavit by way of examination-in-chief of the witnesses of the defendants and for hot tubbing.
"I clarify, that on hearing the counsels at length qua Case Management including on framing of issues, on 1st April, 2019 and further on 12th April, 2019, I had formed an opinion that considering the nature of controversy, no evidence was required to be recorded in the suit and the suit could be decided on the basis of material on record. It was however observed that if on hearing, it appeared that any particular aspect required recording of evidence, recording of evidence thereon shall be permitted at that stage. I further clarify that even thereafter when (the said IA) came up, the opinion earlier formed remained unchanged and it was intended that the arguments on (the IA) be also heard along with the final arguments of the senior counsel for the defendants in the suit and if during the said arguments, the senior counsel for the defendants satisfies that there is a need for recording evidence, evidence shall be taken at that time", Justice Endlaw had said in the impugned order.
On Tuesday, Senior Advocate K. V. Vishwanathan, for the SLP petitioners, urged, "Once the affidavit has been taken by the Court, how can cross-examination be denied?".
"It is only in the Supreme Court of India where one can come against a procedural direction passed by a Single Judge at an interim stage. Such a thing would not happen in the US Supreme Court", remarked Justice Chandrachud.
"This is a classic case of Indians complicating matters! I assume you are for the Indian wing of the licensee?", said Justice Bhat to Mr. Vishwanathan.
"You have argued in the High Court for 4 hours, you have made submissions, and now you want us to interfere? Not at this stage, Mr. Vishwanathan. This is just defeating the purpose of the Commercial Courts Act and the Delhi High Court (Original Side) Rules of 2018! These are High Court judges we are talking about!", continued Justice Chandrachud.
"With all our forensic expertise, we are defeating the Parliamentary intent in a commercial suit! This is why we need to reform ourselves!...I have been to the Japanese IP courts and they don't hear counsel. It is only when there is a complex patent dispute that the counsel are called for clarification. That is also by way of a conference, there are no courtrooms...", observed Justice Bhat.
The bench then proceeded to dismiss the SLP.
It may be noted that the Commercial Courts Act was introduced with the primary objective of adjudication of disputes falling under this Act in a swift time bound manner and lesser hassles to the litigating parties and by introducing minimal interference by the higher courts, when the dispute is pending before the Commercial Court constituted under this Act.
The controversy subject matter of the suit before the Delhi High Court is, (i) the plaintiff (Merck KGAA) is a German Company and the defendants (Merck Sharp & Dohme and others) are American Companies; (ii) the promoters of the said Companies were members of the same family and belonged to Germany; after some of the family members moved to the USA, the American Companies were incorporated; (iii) there have been several agreements between the two sets of companies, of the years 1932, 1945, 1955, 1970 and 1975, relating inter alia to division of territories in which the two will carry on business and use the mark "MERCK" ; (iv) under the said agreements, the defendants‟ business and use of the mark is limited to USA, Canada, Cuba and Philippines, the plaintiff is entitled to carry on business and use the mark in rest of the world; and, (v) the advent of internet has led to the present disputes, with the plaintiff alleging breach of contract, infringement and passing off by the defendants in India by use of the mark on the internet including on various other social media platforms.