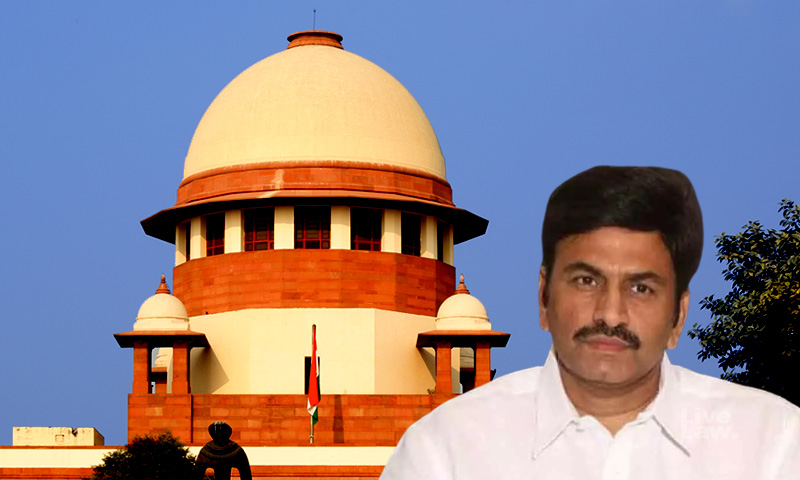 The Supreme Court on Friday granted bail to YSR Congress MP K. Raghu Rama Krishnam Raju from Andhra Pradesh, who was arrested by Guntur CID on May 14 for alleged sedition and promotion of communal hatred over his speeches.A Bench of Justices Vineet Saran and BR Gavai observed that custodial interrogation would not be required as all statements of Petitioner are on record. The bench...

The Supreme Court on Friday granted bail to YSR Congress MP K. Raghu Rama Krishnam Raju from Andhra Pradesh, who was arrested by Guntur CID on May 14 for alleged sedition and promotion of communal hatred over his speeches.

A Bench of Justices Vineet Saran and BR Gavai observed that custodial interrogation would not be required as all statements of Petitioner are on record. The bench also took note of the medical condition of the petitioner, having regard to the heart surgery underwent by him last year. The bench also opined on the basis of the medical report from Army Hospital, Secundarabad, that possibilities of the petitioner's ill-treatment in custody cannot be ruled out.

However, the bench has imposed a condition that Raju should not give media interviews and make press statements during the period of investigation. He has to cooperate with the investigation and should not influence the witnesses. He should respond whenever he is called upon by the Investigating Officer. He shall be given at least 24 hrs notice by IO.

He should also furnish personal bond of Rupees one lakh and provide two securities of the like amount before the trial court within one week.

The Apex Court allowed Raju's appeal against an order of the Andhra Pradesh High Court which had refused to entertain his bail application and had asked him to approach the Sessions Court.

It held that the High Court ought to have considered the bail application on merits. Since "much water has flown" after the High Court order, the Supreme Court said it thought it fit to consider the matter on merits.

"The FIR was lodged only after detailed inquiry by State CID. Considering the totality of the circumstances and also the health of the Petitioner, specially that he had undergone heart bypass surgery, we deem it just and proper that the Petitioner be enlarged on bail."

Senior Advocate Mukul Rohatgi, appearing for Petitioner, argued that Raju's statements are mere criticism of actions of State and in no case can the statements be classified as sedition and made punishable under Section 124A IPC. He stated that the Section has been included to make the offences non-bailable. He also submitted that Raju is being tortured in custody, as evident from medical reports. Thus, he should be released on bail and the investigation may be transferred to the CBI.

The State on the other hand, represented by Senior Advocate Dushyant Dave, argued that the SLP should be dismissed on the ground that the Petitioner has an alternate remedy of filing a bail application before trial court. He further stated that the Petitioner holds a significant authority and his inciteful words have a greater impact on the citizens. "Bigger the position, the greater is the responsibility," he argued.

Dave denied the allegations of custodial violence and alleged that the injuries indicated in the medical report are perhaps self-inflected. Full minute-by-minute account of the hearing may be read here.

The Petitioner has alleged that he is being targeted for being a critic of the ruling YSR Party and that he has been tortured in custody.

During the hearing, Rohatgi pointed out that even as per the medical report submitted by the Army Hospital, there are several injuries on the Petitioner's body, including a fracture. He urged the Court to take suo moto cognizance of his injuries and direct a CBI inquiry into the same.

"My allegation of torture in office of CID is proved. This is what they are doing to a sitting MP. Imagine what will they do to citizens," he remarked.

The Bench however stated that Rao is merely a Petitioner in its eyes and that the Court is not concerned if he's a sitting MP or an ordinary citizen.

Rohatgi then clarified, "This matter needs to be investigated by the CBI. My point is if they're doing this to the sitting MP, then they can do this to anyone."

At this juncture, Dave suggested that these injuries may be "self-inflicted" by the Petitioner during the time gap between Top Court's direction for medical examination and the Petitioner reaching the Army Hospital. He pointed out that there was injury in the medical report submitted by Government Hospital prior to direction made by the Top Court.

"If police wanted to torture him, would they do it on the second toe of the foot ? You have immense knowledge, you know how things work. No police would ever treat an MP in this manner," Dave said.

"It would be absurd to argue that someone within one evening will do all of this to himself," Rohatgi rebutted.

Dave then submitted that the State will not contradict the report of the Army, however, it must be noted that the report in question is inconclusive and does not conclude any injuries of gravity.

He stated that the report of Medical Board which submitted its report to the High Court and that of the Army Hospital which the Court is perusing today are correct. However, the injuries may have been self-inflicted.

"This gentleman when he was asked to travel to the hospital in an ambulance, he refused. He travelled in his car… All throughout he was waving at people, showing his foot and giving interviews. There was no injury to his foot then.

The MP's conduct to travel in his own car for 300 km with his own security and his foot up like that. That may have caused it. Nobody would treat MP like this," Dave told the Bench.

"The fracture in his foot is an undisplaced fracture. The report doesn't show whether it was an old or new fracture. The Army report shows it. On 17th, he didn't have it."

Rohatgi stressed that there was no incitement or call for violence in the speeches given by Mr.Raju, and therefore there was no basis for invoking the offence of sedition under Section 124A IPC.

Referring to the contents of the FIR, he submitted that the allegation against Raju is that he has created hatred between two communities.

"This can never be sedition. This only shows that he is outspoken in his criticism against the leadership. This is elementary… Sedition means to create disaffection and to overthrow the government. That is not here," he argued. [Kedarnath Singh v. State of Bihar]

He alleged that the provision (Section 124A IPC) has been invoked only with a view to block bail for the MP.

Dave on the other hand pointed out that not once has Raju denied uttering the impugned statements.

"You have to see if the offences are prime facie committed or not. If he (Raju) has not denied that, then the Court cannot interfere…Whether he is guilt of sedition, all of this will have to be done into by trial," he submitted.

Dave continued that the problem is not that the Petitioner made statements against the Chief Minister but, the issue is that he did not limit himself to fair criticism and tried to incite hatred between two communities and provoked them to 'kill each other'.

In this regard, he referred to certain statements made Raju that—the YSR Congress was only going to vaccinate Christians and Reddys, and volunteers should be thrashed.

"Is this the responsibility of the MP ? He's asking for people to be thrashed…He tried to stroke hatred against Christian and Reddy communities. They look orchestrated and an attempt to cause disaffection against the government. They squarely within the contours of S. 124A," Dave submitted.

"And coming from someone who is an MP. His word carries weight. And that too during COVID times. We don't want unrest during such difficult times. We gave him time and told him that what he was doing was wrong and he should correct himself. But he crossed all boundaries."

Senior Advocate V. Giri, also appearing for the State, suggested that there should be a cessation of all such interviews. "The atmosphere is already surcharged and it shouldn't be spoiled further," he said.

Dave urged the Top Court to dismiss the special leave petition filed under Article 136 of the Constitution as alternative remedies are available to the Petitioner.

He stated that the High Court has directed the Petitioner to go to the 'Competent Court' and the same cannot be interfered with under Article 136 as the matter has not been decided on merits.

He referred to a Constitution Bench judgment of the Supreme Court where it was pointed out that the Top Court was never intended to be a 'regular Court of Appeal'; it was supposed to be an Apex Court for 'laying down the law'.

"There has been no miscarriage of justice, let alone grave. The only exceptional thing here is that he is an MP and that he has the money that Rohatgi offered plane to Delhi for medical examination.

Thousands of people come to the Court. Nobody gets this kind of urgent hearing or this kind of treatment for a simple injury to second toe of foot. I would understand if there was serious attack. And he wants a CBI inquiry for that?" Dave said.

He stated that in similar matters of lesser degree such as Bhima Koregaon case, accused are in custody due to sedition and relief is denied to them.

"These are similar statements. There's only difference of degree. And the Court rightly said that they are seditious statements," said Dave.

He also referred to the case of Kerala journalist Siddique Kappan who was asked to approach the High Court in connection with his arrest in the Hathras matter. Similarly, the Top Court refused to entertain the bail plea filed by Akhil Gogoi.

Mine is after the HC refused to give remedy. Mine is not under 32. Now coming to alternative remedy, the HC did not entertain me and I have no remedy now. Not to entertain is a violation."

During the hearing, Dave and Giri informed the Bench that the High Court has initiated suo moto contempt action against the State for not taking the Petitioner for medical examination in a Government Hospital.

The Bench however refused to pass any order at the moment, as the High Court's order is yet to be uploaded. "Oral mention, the order is needed," it said while giving liberty to the State to approach the Top Court when the order comes out.

Raju was arrested on May 14 on charges of sedition and promotion of communal hatred over his critical remarks against the ruling party in State of Andhra Pradesh and was taken to the Crime Investigation Department (CID) office in Guntur district.

On May 15, the Andhra Pradesh High Court had refused to entertain his bail application saying that he should approach the Sessions Court first.

On May 17, a Supreme Court Bench of Justices Vineet Saran and BR Gavai directed the MP to be taken to Army Hospital, Secunderabad for medical examination with respect to allegations of custodial torture. The order was passed after the Court took note of the fact that the Magistrate had noticed injuries on the feet of the MP and that he had undergone a heart surgery last year.

Dave objected, saying, 'Just because he (Raju) is an MP, he cannot bypass the High Court and come here directly.'

In the affidavit filed by the Andhra Pradesh Government opposing the plea filed by Raju, the State had submitted that being an MP, Raju has "consistently and consciously and with a mala fide intent, abused his authority/reach as a public person with the sole intention of creating enmity between various class of citizens and to excite disaffection towards the Government".