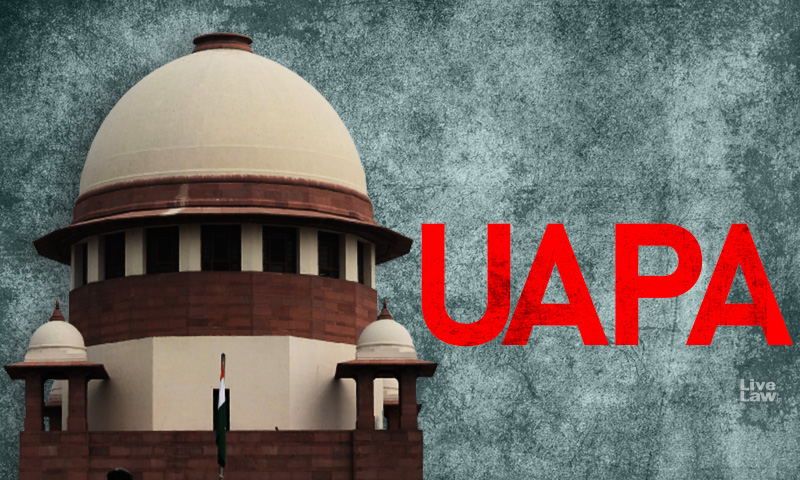 The Supreme Court on Friday issued notice in a petition preferred by the State of Kerala against Kerala High Court's order of discharging alleged Maoist leader Roopesh accused of charges under Unlawful Activities (Prevention) Act and sedition under Section 124A (sedition) of the Indian Penal Code on the ground of irregularities in the order granting sanction for prosecution. The bench...

The Supreme Court on Friday issued notice in a petition preferred by the State of Kerala against Kerala High Court's order of discharging alleged Maoist leader Roopesh accused of charges under Unlawful Activities (Prevention) Act and sedition under Section 124A (sedition) of the Indian Penal Code on the ground of irregularities in the order granting sanction for prosecution.

The bench of Justices MR Shah and BV Nagarathna in their order said, "Issue notice returnable on 19th September 2022. Dasti in addition is permitted. Respondent be served within a period of 1 week and counter if any be filed before the returnable date."

The High Court bench of Justice K. Vinod Chandran and Justice C. Jayachandran in the impugned order dated March 17, 2022 while discharging Roopesh, who allegedly along with members of the banned Maoist organization distributed pamphlets containing "seditious writings" in tribal colonies in Wayanad district, had held the sanction under the UAPA granted after six months from the date of receipt of recommendation of the authority was not a valid sanction.

During the hearing, the counsel for the State while referring to Rule 3 & 4 of UAPA (Recommendation of Sanction) Rules, 2008 ("Rules") submitted that the High Court had committed serious error in not treating the rules as "directory" in nature.

Rule 3 of the Rules imposes a mandate on the authority appointed by the Central Government or State Government to submit a report containing recommendations for granting sanction for prosecution within a period of 7 working days on receipt of evidence gathered by investigating officer under the Code. As per Rule 4 of the Rules, the Central Government or the State Government has to take a decision regarding sanction for prosecution within 7 days after receipt of recommendations of the authority.

He further submitted that delay of 6 months in granting sanction for prosecution had happened due to re constitution of the authority and even otherwise the Rule 3 and 4 could be said to be procedural and the same ought to have been considered as directory. It was also counsel's contention that no prejudice was caused to the accused since he was already on bail.

The petition by the state before the Top Court stated that the cognisance was taken by the Magistrate upon police report and therefore section 460(e), CrPC was squarely applicable & irregularity in proceedings would not vitiate the entire proceedings.

"Rule of strict construction cannot be applied in an impracticable manner so as to render the statute itself nugatory. In other words, the rule of strict construction of a penal statute or a special penal statute is not intended to put all the provisions in such a tight iron cast that they become practically unworkable, and thereby, the entire purpose of the UA(P)A is defeated," the plea stated.

While assailing the High Court's order, the State of Kerala had also averred that the accused was involved in serious crime and if they are allowed to evade prosecution on grounds of technicality, there would be no assurance of them not repeating the crime.

The petition was preferred by AOR Harshad V Hameed.