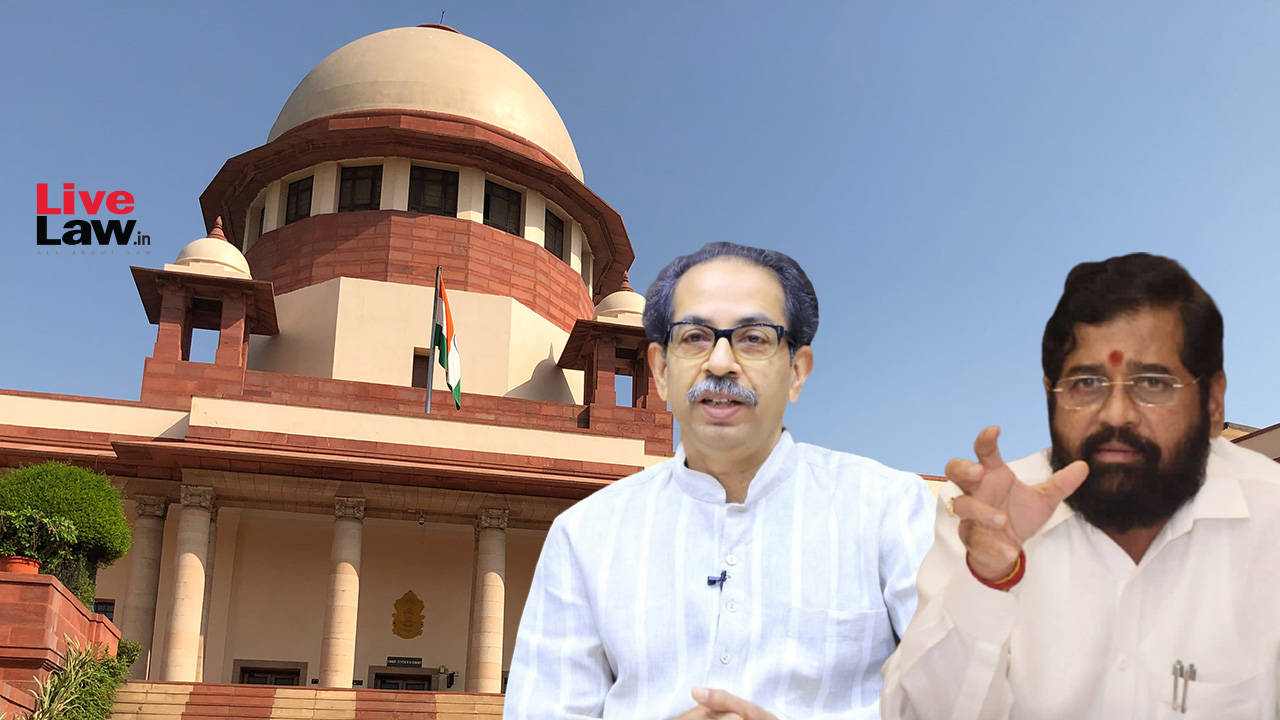 A three-judge bench of the Supreme Court on Wednesday observed that the issues arising in the petitions filed in relation to the Shiv Sena rift may have to be referred to a larger bench.A bench comprising Chief Justice of India NV Ramana, Justice Krishna Murari and Justice Hima Kohli was hearing six petitions filed by petitioners belonging to Eknath Shinde and Uddhav Thackeray factions of...

A three-judge bench of the Supreme Court on Wednesday observed that the issues arising in the petitions filed in relation to the Shiv Sena rift may have to be referred to a larger bench.

CJI NV Ramana orally remarked during the hearing that important constitutional issues arise in the cases which may require adjudication by a larger bench.

The CJI also indicated some issues which may arise :

However, the CJI made it clear that he is not immediately constituting the bench and the parties must first come up with the preliminary issues.

"I have not passed an order for referring to larger bench, I am thinking aloud," the CJI made it clear.

The matter is now listed for discussing preliminary issues on August 1. Status quo order passed by the Court on July 11, keep in abeyance the disqualification proceedings, continues to operate.

"After hearing the counsels it has been agreed that some issues may if necessary be referred to a larger bench also. Keeping in mind the same, to enable the parties to frame the issues, let them file the same preferably by next Wednesday."

What transpired in Court today?

At the outset today, CJI Ramana said he has some doubts regarding the consequences of the deletion of para 3 from tenth schedule, which permitted inner-party split

Paragraph 3 of tenth schedule was omitted by the 91st Constitutional Amendment Act in 2003.

The CJI, clarifying that he is not expressing any views and only seeks to clear his doubts, said that after removal of para 3, the concept of split is not recognised. Once there is no split, what are the consequences, he asked.

Senior Advocates Kapil Sibal and Dr AM Singhvi appearing in petitions filed by Uddhav group argued that since the rebellion group violated chief whip, they are disqualified as per tenth schedule. He also submitted that the protection under para 4 of the schedule is not available to them since they did not merge with another political party.

Senior Advocate Harish Salve appearing for the present Chief Minister Eknath Shinde argued that the tenth schedule does not throttle inner-party democracy.  "Raising voice within party without crossing lakshman rekha is not an act of defection." he said.

To the specific query put forth by the CJI, Salve submitted that there is no need to look into para 3 and that the issue is confined only to para 2, which as per him is not applicable to attract any disqualification in the present facts and circumstances.

"You have to voluntarily give up party membership or violate party whip by voting against it under para 2. "Voluntarily giving up party membership" has been interpreted. If a member goes to the Governor and says opposition has to be made the government, it has been held to be voluntarily giving up membership. If after the Chief Minister resigns, and another government is sworn-in, it is not defection. Are we in a fantasy land that a man who cannot find the support of 20 MLAs should be restored as the Chief Minister? I have a right as part of inner part of democracy to raise voice against the leader. Raising the voice is not disqualification. Para 3 being deleted is a non-issue."

Sibal submitted that 40 members of Shiv Sena, by their conduct, are deemed to have incurred disqualification by giving up party membership as per para 2 (disqualification on ground of defection) of tenth schedule.

"By voting for a candidate put up by BJP as Speaker in violation of official whip, they have attracted disqualification."

He argued that if such rebels are allowed to form the government, then every elected government can be toppled, despite the fact that there is no protection under the tenth schedule.

He alleged that the Speaker is "merrily sitting" on the disqualification complaints made by Uddhav faction, even notices have not been issued.

Sibal continued that para 3 of the tenth schedule was omitted by the 91st Constitutional Amendment Act in 2003. Thus, "the split is no longer recognized."

Moving on to the swearing in of Eknath Shinde as Maharashtra's Chief Minister, Sibal submitted that the Governor should not have sworn-in the new government when the Supreme Court was hearing the matters.

"Governor could not have sworn the individual who has chosen to separate from the political parties and have incurred disqualification. Speaker recognizing a whip other than the official whip nominated by the party is Mala fide. Issue of the Political Party is itself in question. When disqualified members elect a person and they stand disqualified, then the election itself is bad."

Sibal urged that the records of assembly should be called for and meanwhile, Eknath should be stopped from occupying CM's office, court may direct interim disqualification.

"Every day's delay will play havoc with democratic decisions. Not for a single day an illegitimate government should stay as per Rana decision."

Salve argued that the disqualification proceedings initiated by the Uddhav faction have "throttled" the inner-party democracy. He argued that tenth schedule does not attract when a large number of people in a party feel that another man should lead. Thus, he argued that court should refrain from interfering in the workings of a political party.

Solicitor General of India, Tushar Mehta, appeared for the Maharashtra Governor. Clarifying that he was speaking as a counsel and not as representative of Governor, the SG said the Court may also examine issues relating to breaking of pre-poll alliance and the issue whether a group of members going against the party leader to fulfil the pre-poll ideology promised to the electorate would attract disqualification.

On July 11, 2022 the CJI had asked the Speaker to keep in abeyance the disqualification proceedings against the MLAs - initiated by both Shinde and Thackeray groups against MLAs of the rival groups - till further orders.

The bench was hearing the following petitions related to the crisis: