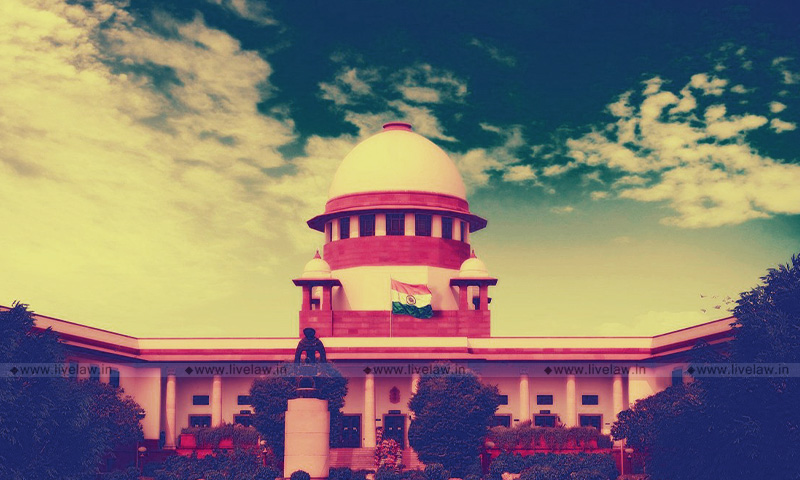 The Supreme Court on Thursday launched a facility in its mobile app for providing links to virtual hearings to media persons.The Chief Justice of India NV Ramana launched the facility in a virtual event which was also attended by Justices DY Chandrachud, AM Khanwilkar and Hemant Gupta. Justice Chandrachud and Khanwilkar are both recovering from COVID-19.Apart from launching the mobile...

The Supreme Court on Thursday launched a facility in its mobile app for providing links to virtual hearings to media persons.

The Chief Justice of India NV Ramana launched the facility in a virtual event which was also attended by Justices DY Chandrachud, AM Khanwilkar and Hemant Gupta.

Justice Chandrachud and Khanwilkar are both recovering from COVID-19.

Apart from launching the mobile facility, the CJI also said that the Supreme Court was introducing a feature of "Indicative Notes" on its website and mobile app which will summarise landmark judgements.

The CJI further noted that he was actively considering live streaming of proceedings for some Courts, but would seek consensus from all Judges before launching the same. He would additionally appoint a senior official to act as the point of contact between the Supreme Court and the media. The CJI also said that he has given directions to rationalize the process for giving accreditation to media persons.

The event commenced with the CJI remarking, "Our media friends, you need not bother coming to Court. You can sit at home and watch the proceedings. Everyone has worked hard on this."

Justice Gupta then took over to note that the initiative would increase transparency, but the only caveat would be that the link which would be given should not be shared with unauthorized persons.

Justice Chandrachud then took over and said, "One thing I'll like to say which the Chief won't say as he is a self-effacing person. When I asked him to set this up, he responded in less than three days and also emphasized on the need to provide access to journalists. There was no need to impress upon the Chief. He readily agreed."

The Judge then observed that he hoped the access to links would ensure the safety of journalists as they are exposed to outer world on a regular basis.

Justice Khanwilkar concurred with this and stated that keeping in mind the important association of the media with the Supreme Court, and also because the media is rendering an essential service which has to be harnessed, the institution wanted to pay back to them for their service.

The CJI then closed the event by commenting that Supreme Court rulings had an important bearing on the lives of people and the role of media was important for the dissemination of information.

"Access to public is important. Unfortunately, COVID has wreaked havoc. The shift to VC hearings is a difficult process and a lot of issues were faced. Former CJI Bobde, Justice Khanwilkar, Justice Chandrachud, worked very hard for the last one year. We must thank them".

"Transparency is a time-honored principle when it comes to the judicial process in our country. Hearing of cases have always taken place in public courtrooms, with access being allowed not only to the lawyers and the litigants in a particular case, but also to the general public. The only restrictions that were ever imposed earlier were because of space and security considerations.

This access to the public is important, as the rulings of the Courts of law, and more particularly the Supreme Court, have a bearing on the lives of people throughout this country. The role of the media assumes importance in the process of disseminating information", CJI said in his speech.

The CJI went to observe that the requests had come from journalists to create infrastructure so that did they not need to come to Courts and could report from their homes accurately – "This will allow you to cover proceedings from mobile phones. Only, I must highlight that technology that is newly developed may be susceptible to issues which arise, and should not be unnecessarily magnified. Please be patient and give the system requisite time".

He further acknowledged the effort put in by the Committee to come up with the app within 7 days, despite being down with COVID – "their commitment to their duty deserves appreciation".

"The Secretary General, the Registrar (Computer) Mr. Rajiv Kalra; Senior Technical Director Mr. Manoj Tuli; Technical Director Mr. Pardeep Nanda; and the programmer Mr. Sanjeev were down with COVID. Still, the team worked from home, and came out with this feature within 7 days. Their commitment to their duty deserves special appreciation. It is through all their efforts that today we are able to release this application, which is a platform for media persons to allow them to view proceedings live on the mobile phones", the CJI said.

The CJI also remembered those judicial officers and court staff who lost their lives due to COVID-19.

My heart goes out to the families and the loved ones of those whose life has been cut short by this pandemic", CJI said.

The CJI wound up his speech by appealing to everyone to stay safe and follow all COVID protocols.