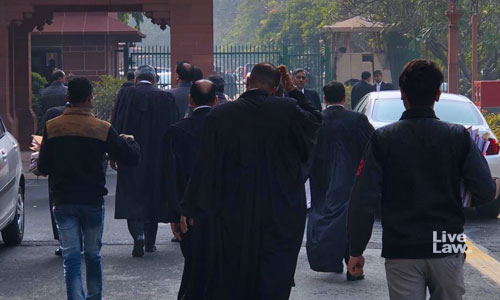 The Supreme Court on Tuesday observed that the trend of lawyers giving dishonest advice to clients needs to be curbed.The bench of Justices DY Chandrachud, R. Subash Reddy and Ravindra Bhat was hearing an SLP arising out of a March decision of a Division Bench of the Punjab and Haryana High Court whereby it affirmed the judgment of the Single Judge relegating the petitioners, who were...

The Supreme Court on Tuesday observed that the trend of lawyers giving dishonest advice to clients needs to be curbed.

The bench of Justices DY Chandrachud, R. Subash Reddy and Ravindra Bhat was hearing an SLP arising out of a March decision of a Division Bench of the Punjab and Haryana High Court whereby it affirmed the judgment of the Single Judge relegating the petitioners, who were central government employees, to the alternative remedies by way of the Central Administrative Tribunal.
"These petitioners have been misled by the lawyers for first filing writ petitions before High Courts and then coming to the Supreme Court in SLPs, instead of advising them to go to the CAT. Look at the amount of trouble caused to these people...the advocate accepted the brief for a writ petition in the High Court. When that was dismissed, they came to the Supreme Court in an SLP! This practice of lawyers giving dishonest advice to clients needs to be deprecated", observed Justice Chandrachud.
"It has been settled in the L. Chandra Kumar case that where an alternative, equally effective remedy is available, a writ petition will not be maintainable! Look at the plight of these people who have been roaming around from here to there for the last 4 years! We must impose costs and pass strictures against the lawyers!", said Justice Bhat at the outset.
Finally, the bench dismissed the SLP, recording in its order that "The High Court has declined to entertain the writ petitions on the ground that the petitioners ought to have approached the Central Administrative Tribunal. We, therefore, decline to entertain the Special Leave Petitions, clarifying that it would be open to the petitioners to move the Tribunal for appropriate reliefs"
" In the event that the OA before the Tribunal is filed within a period of two months from the date of this order, the Tribunal may entertain the OA on merits", the bench added in its order.
Background

There were 30 petitions before the High Court, some had laid challenge to the order of dismissal/removal from the service; in some cases, the statutory appeal filed has also been dismissed; in some writ petitions, the petitioners have challenged the charge-sheet issued for initiating disciplinary proceedings; in some, the petitioners were found ineligible to be appointed. The High Court was of the opinion that in view of the availability of equally efficacious remedy before the CAT, the High Court should not entertain a writ petition under Article 226/27 of the Constitution. "It may be noted here that learned counsels appearing for the petitioners in various petitions do not dispute that all the petitioners do have an alternative remedy. In some cases, appeal against the order of dismissal/removal is maintainable, however, no such appeal has been filed. Further, against the orders of dismissal/removal after dismissal of the statutory appeal, the remedies of revision/review are also maintainable... In view of the aforesaid discussions as also the facts of these cases, this Court is of the considered view that all the petitioners should be relegated to the alternative remedies as available. The petitioners have failed to draw attention of the Court to any special circumstances to persuade the Court to take a different view. Hence, all the writ petitions are disposed of in view of the observations made above", the Single Judge had held.

As recorded in the High Court order, all these petitioners were employees of the Department of Communication and Information Technology, under the Central Government. They were selected pursuant to a recruitment notice issued in February, 2014 to work as Postal Assistants/Sorting Assistants in the Post Offices. In December, 2015, a recruitment examination held for post of Postal Assistants/Sorting Assistants was ordered to be cancelled. Various petitions before the Central Administrative Tribunals were filed. It is alleged that the aforesaid petitions were allowed. However, the High Court of Gujarat set aside the same. The Supreme Court disposed of these matters in July, 2017. It held that since the allegations of illegality are in the areas of states of Uttarakhand, Rajasthan, Chhattisgarh, Haryana and Gujarat, therefore, it would not be appropriate to cancel the entire examination. Thus, the Supreme Court permitted the Department to proceed with the disciplinary proceedings. Basic allegation against the employees is that they had not appeared in the recruitment examination themselves and certain other persons had impersonated them. After receiving the report from the Forensic Science Laboratory regarding comparison of signatures of the candidates on the Aptitude Test, Typing Test and Data Entry Test with the standard signatures, the disciplinary proceedings were initiated against the petitioners.